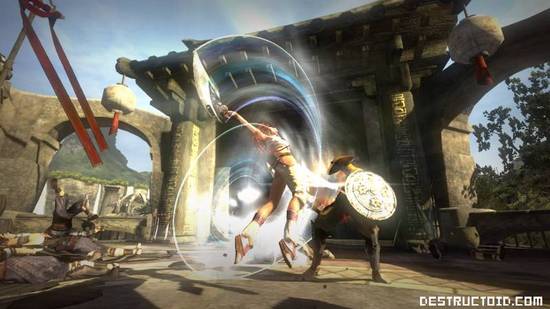 So I don’t know what you guys were doing last Thursday, but I was playing Heavenly Sword in a dimly lit Sony arcade, tucked beneath Santa Monica’s Le Merigot hotel. Jealous much? Would it make you feel any better if I told you the game was total crap, and I spent most of my time playing Singstar instead? Sorry, can’t do that — Heavenly Sword is pretty freakin’ sweet.

But here’s the good news — the team at Ninja Theory have completed a demo and it’s ready to go, pending Sony’s approval. Lead developer Mike Ball from the Ninja Theory message boards:

People at home really want to get hands on too. Well, let me just tell you all that the dev team has finished work on the demo.. that’s it… it’s in the bag… so now it’s a case of Sony deciding when they feel is the best time to release it to PlayStation Network.

The game is in the final stages of development, with the team currently working out the final bugs. Word has it the game will be released in September, so we shouldn’t be waiting that much longer for the demo. In the meantime, check out these E3 screenshots of Heavely Sword and don’t drool on our rug.

[Via FileFront, thanks to the Burlingnator for the heads-up!]