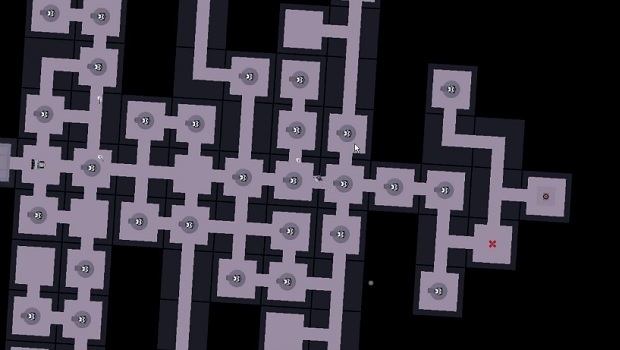 I couldn’t help myself

Heat Signature was one of the games I most wanted to get my hands on at EGX. Designer Tom Francis was the guy behind Gunpoint, one of my favorites of 2013, and this next title similarly allows a great deal of player expression and freedom.

Gunpoint was a puzzle game but it was open-ended enough that whenever I solved a problem, I felt I was coming up with one possible answer rather than just stumbling on the singular “correct solution.” Heat Signature shares that structure; at the start of a game, the player has the option of going on either an assassination or thief mission (although Tom noted that there wasn’t much of a difference between them at this point).

Controlling you ship is pretty easy — just click in the direction you want to go in and blast away with the left mouse button. Because you’re in space, you really need to take into account inertia and your ship’s momentum. Fly straight into the vision cone of a hostile ship, and you’re going to get a barrage of missiles fired off in your direction. The other thing to take into account is your vessel’s heat signature, as in how hot the ship is thanks to your thrusting. Each ship has a circular sensor field that will detect any hot vessels and declare them hostile. If you want to board other ships, you’ll need to use short, controlled bursts to get to an airlock.

That’s when the other part of the game comes into play. Upon boarding, your pilot can travel between rooms, avoiding guards and either stealing precious cargo or assassinating a designated crew member, depending on what mission you have picked. Once you’ve achieved your task, most ships will normally have a station where you can select a new mission and away you go.

Tom’s hoping to build in a lot of new features into Heat Signature, like a faction system, a persistent map, and more fleshed out information about your assassination targets. Right now, it’s a fun proof-of-concept but even though he has absolutely no release date in mind, I’m sure the next chance I get to play Heat Signaure, it will be much more advanced than what I saw. Tom even patched the game 12 times during the four days of EGX!