The most expensive way to play 132-card pickup

I’ve been playing Hearthstone regularly for about a year now, and I’ve seen the game change pretty significantly during that time. Hearthstone is Blizzard’s most popular game by a large margin, and it’s not hard to see why. Streamlining the esoteric rules of Magic: The Gathering is something that probably needed to happen, and Blizzard’s made their fortune by making hardcore formats and genres accessible to the masses. Furthermore, giving you the first hit of dopamine for free is a proven business model, and it works just as well in card games as with less savory products.

Earlier this year, Blizzard changed Hearthstone‘s rules, rotating out some of the older cards to make way for new ones, and updating many that they felt were too far off the power curve. It looks like that’s what they plan to do well into the future, rotating out older sets as new ones become available. Hearthstone expansions come in two different formats. There are story-themed expansions like One Night in Karazhan that you can pay cash for or unlock with in-game gold. Playing through one of these unlocks the same cards for everyone, and they’re the best place for new players to begin earning powerful cards. The newest set is the other kind, with randomized packs which can be earned through Arena play or bought with gold or cash.

The cool thing about the most recent update, Mean Streets of Gadgetzan, is that it takes some cues from the story expansions. When you load up the game client right now, you’ll be introduced to a two-headed ogre, a representative of Gadgetzan’s Grimy Goons faction. (By the way, if he’s not being voiced by John DiMaggio, it’s an incredible soundalike.) Each of Gadgetzan’s factions works with three of Hearthstone‘s nine hero types, and has some special cards that any of the three classes can use. The ogre will ask you to win three games as any of the heroes his faction works with, and doing so will win you a couple of free packs from the newest expansion. Once that’s done, you’re introduced to representatives from the Jade Lotus and the Kabal, who represent other sets of three heroes. 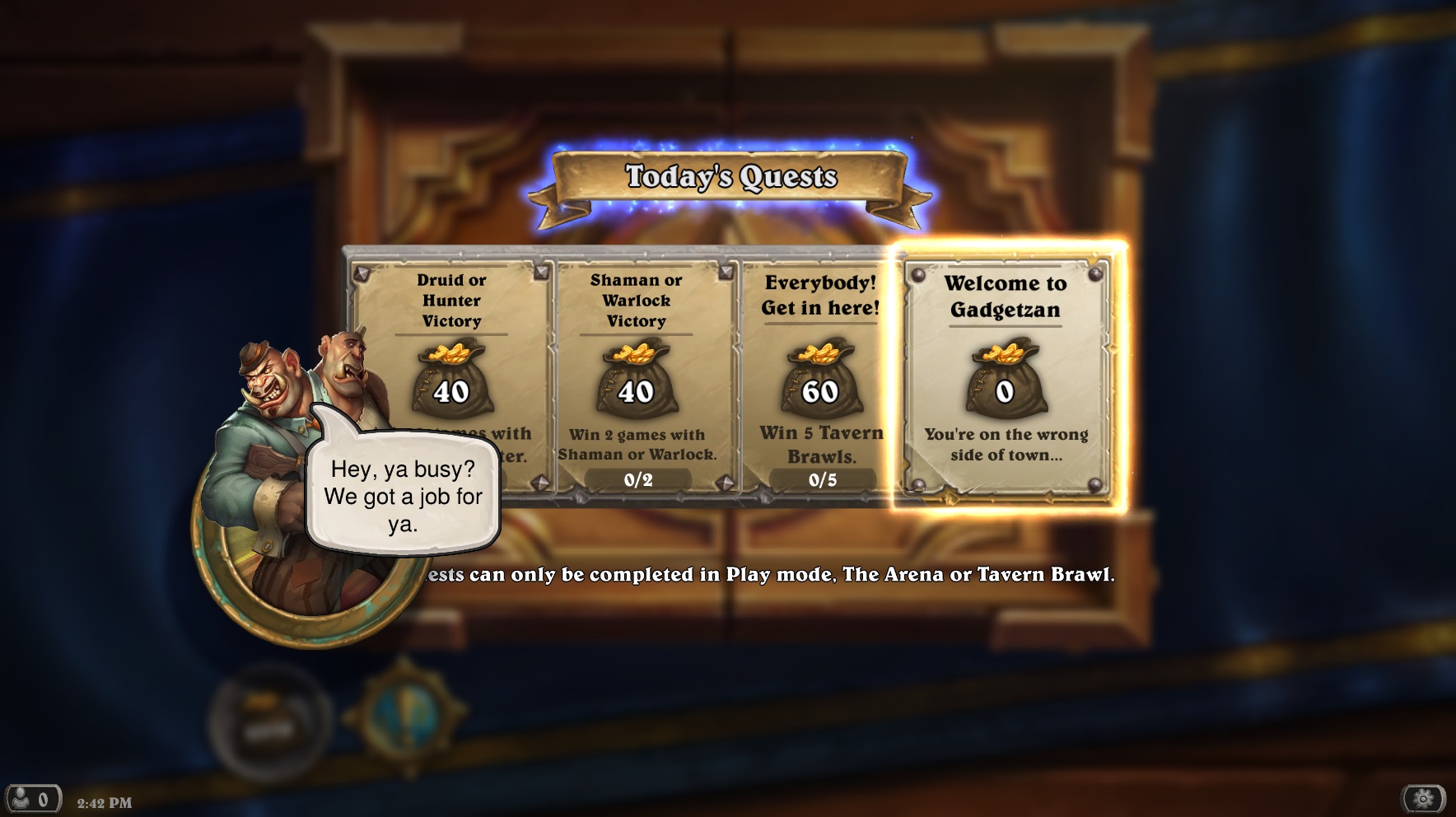 The Gadgetzan expansion plays to the wackier side of the spectrum, with Goblin mobsters, Troll alchemists, and Walrusman police officers fighting over territory. Every new expansion includes a new game board to play on, and Gadgetzan’s includes several references to Overwatch, including Junkrat’s Rip-Tire, Genji’s Dragonblade, and a Pachamari doll hidden in the corners of the play field.

Once you’ve completed the quests for all three of Gadgetzan’s competing factions, you’ll unlock six of the new packs, which will contain 30 new cards. It’s not as good as unlocking all of the cards from one of the story expansions, but it’s a good place to start. 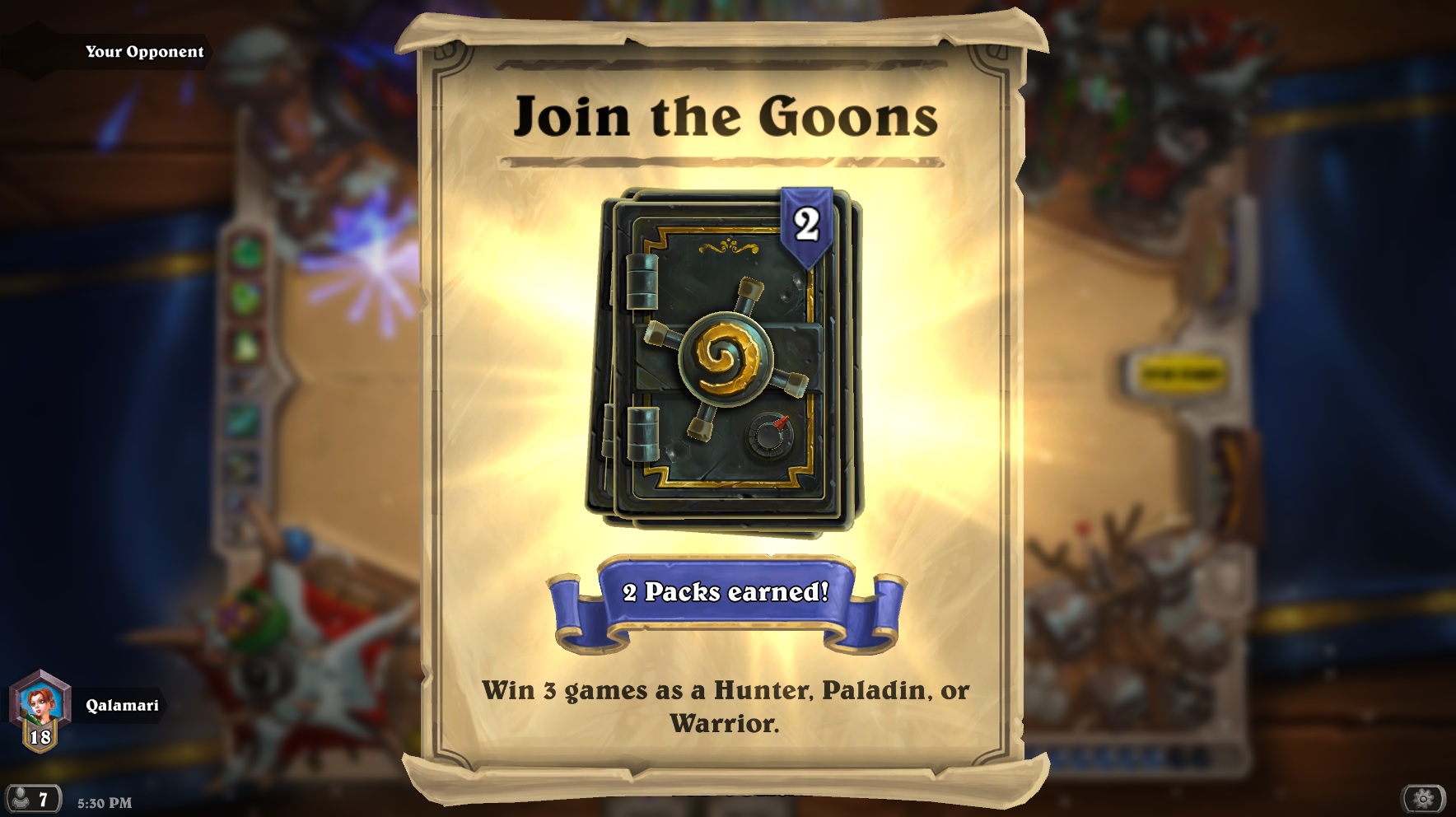 Each of the factions has a different theme to build a deck around. The Goons work with Hunters, Warriors, and Paladins, and can give stat buffs to creatures that are still in your hand. The Jade Lotus are aligned with Rogues, Druids, and Shaman, and their theme involves summoning Jade Golems that get more powerful each time you play one. The Kabal is a group of Warlocks, Priests, and Mages who gain huge bonuses if their decks don’t have any more than one of the same card.

I’m not sure if there’s ever a right or wrong time to jump into Hearthstone, and I’m well aware it’s not for everyone. It’s free to start and has marvelous production values, though some people will be turned off by the randomness of the cards. It is possible to play without spending any money if you’re patient. Eventually you’ll be able to work your way towards some of the more powerful cards, though Blizzard does their best to make whipping out the credit card an attractive shortcut. For me, it scratches the itch I get when I’m not able to play Magic: The Gathering in person, but your mileage may vary. I’ve had a lot of fun with it though, and I’m looking forward to exploring more of Gadgetzan’s Mean Streets.