These changes are a big… deal

All successful collectible card games maintain their relevance by adding new expansions at periodic intervals, and HearthStone is no different. Blizzard released some information earlier today that let us know more about their plans for HearthStone into the next year.

Sometime soon, the current pool of cards that are valid for standard play will be reduced. This will coincide with the release of a new card set, rumored to be themed around the Un’Goro crater. When this happens, the standard format’s name will change over from Year of the Kraken to Year of the Mammoth. All of the expansions released in 2015 will rotate out of standard play and will only be available for “Wild” games, where any card can be played. This includes two of the Story expansions, Blackrock Mountain and The League of Explorers, as well as The Grand Tournament card set, all of which will rotate out at the same time.

In addition to the full expansions that are leaving standard play, Blizzard announced that several classic cards will also lose their eligibility. Fortunately, anyone who already has copies of these cards will be reimbursed their full crafting cost value for as many copies of that card as the player owns and can play in a deck. This reimbursement will be limited to playable copies, so you’ll only be given arcane dust for one copy of a legendary card from the list, or up to two copies of a more mundane card. It’d probably be a good idea to craft these cards if you have the ability to do so, since you’ll be able to keep the cards to play in Wild and will also receive the full dust value when they leave Standard. 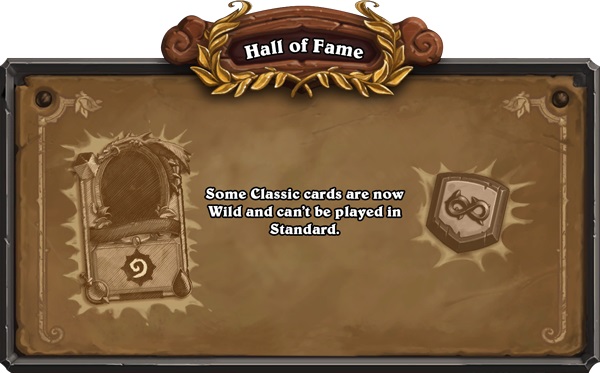 The standard cards losing their eligibility that can be used by any class are Azure Drake, Sylvanas Windrunner, and Ragnaros the Firelord. The reasoning for each of these cards rotating out seems to be that each of them were somewhat overplayed, causing the deck slots where they could be inserted to become stagnant. In Sylvanas’ case in particular, the blog post mentioned that her Deathrattle ability to steal an opposing creature would be too powerful when combined with cards from the upcoming expansion.

Several class-specific cards will also be removed from standard play. For the Warlock, Power Overwhelming will rotate out. For the Mage, Ice Lance, and for the Rogue, Conceal. All six of these cards will join what Blizzard is calling the “Hall of Fame,” which also includes cards currently in the Reward set.

Blizzard also announced that there would be no new story expansions this year. Instead, three themed (pack) expansions will be released throughout 2017. The most recent of these, Mean Streets of Gadgetzan, did a much better job of combining the feel of the Story expansions with the new card sets, so I’ll be interested to see how this plays out.

The blog stated that “each release will include optional single-player missions that will help develop the expansions’ thematic narratives and offer fun challenges.” In Mean Streets, each of the faction’s leaders introduced themselves to you and gave you a quest before providing a couple of packs, and it sounds like more of that type of content is what we should expect from upcoming expansions.

Finally, it was revealed that players will be able to unlock a new hero portrait when the next expansion launches, the Rogue hero Maiev Shadowsong. Maiev was the Warden from Warcraft 3‘s Frozen Throne expansion, and a large part of the Night Elf campaign in that title involved her efforts to track down and recapture Illidan, the Demon Hunter known as the Betrayer. Her character portrait will be available to everyone who plays as the Year of the Mammoth kicks off.

A Year of Mammoth Proportions! [Blizzard]