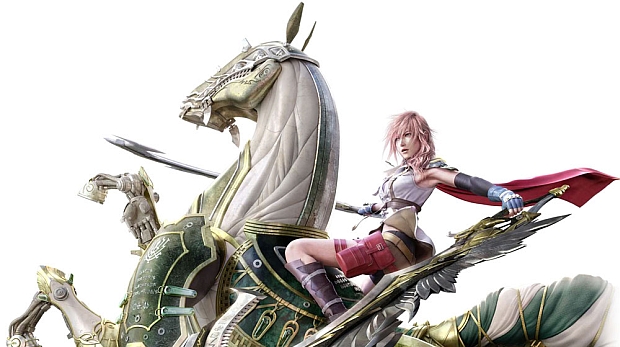 Alright. Now we know Final Fantasy XIII‘s coming out March 9th, 2010. Square Enix promised to blow a load of details onto gamer’s faces on the 13th of every month, but that video with the smarmy dude in too-tight pants wasn’t quite enough to constitute a properly informational spoodging. Thankfully, the game is coming out next month in Japan, and its premier gaming rags are keeping the details coming. Andriasang surfaced with some choice bits about FFXIII‘s character and battle systems.

As you know, character progression happens via the “Crystarium System,” which superficially seems similar to Final Fantasy X‘s Sphere Grid. But instead of a single chain of stat and ability upgrades, characters in FFXIII upgrade according to their role in combat. Selecting (and switching) roles during a battle can change a character’s style and available skills, allowing for some degree of specialization as characters move around their “Power Line” upgrades. All of this is done by spending Crystal Points acquired in battle. In a good move designed to minimize grinding and manage difficulty, the characters all have “Crystarium Levels” that act as level caps, only raised once past certain points in the story.

And then there’s weapon evolution. Not unlike Final Fantasy VIII‘s ingredient-based weapon upgrades, character weapons can be evolved by combining items found around the world and off of enemies. Once evolved, weapon characteristics and appearances change. For example, Lightning’s “Blaze Edge” can turn into a “Slash Carbine,” which looks completely different. Even better, the beanie-wearing, Shiva-riding hero Snow’s weapon is apparently his coat, which becomes more fabulous with every upgrade. This is the first second time fashion has been acknowledged as a gameplay element in Final Fantasy.

If this all sounds too complicated, that’s OK. JRPGs rarely explain themselves very well outside of play. Just know that the game has two styles of Chocobo. One is the tubby spaniel-bird of Pulse, and the other an apparently sleeker, more traditional Chocobo of Cocoon. There. Complicated stuff, and two kinds of Chocobos. That’s Final Fantasy XIII. Sold