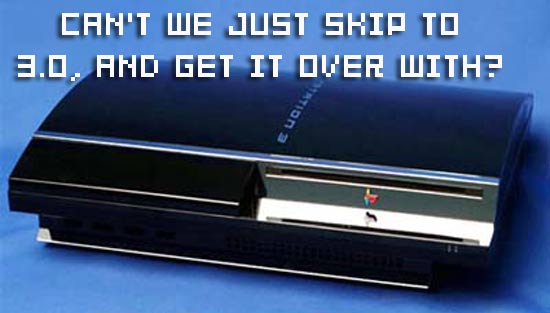 While not exactly brimming with details when they shot one over our bow concerning what we can actually expect from their soon to be released firmware update, Sony was at least kind enough to give us fair warning. In yesterday’s entry of the PlayStation blog, Eric Lempel (Director of PlayStation Network Operations) gave us the virtual “heads up” that version 2.01 shall fall down upon our feet in the next couple of days.

The good news is that it will further stabilize the beast that is the PlayStation 3. As you may have heard, the last update was a source of frustration for some. The bad news is, the update is unlikely to have those Xbox Live-esque features of in-game XBM support and messaging that we’ve been clamoring for. We’d all like to think that Sony has something more up their sleeve, but at this point, I think there are many of you out there that would gladly settle for some relief from the last update — that caused a few surprise cases of console frostbite, without warning.

[Via 1up — Thanks to the only citrus that counts]