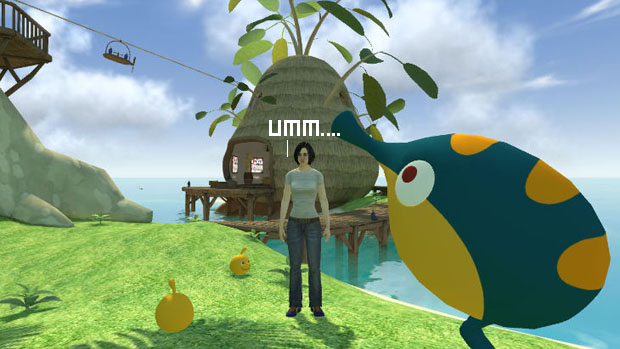 Have you ever seen someone playing something so crazy looking that you just had to stop and ask what the hell it was? That’s what these screens from the newly launched LocoRoco space for PlayStation Home would have me asking?

The new space, probably tied to the upcoming PSP release LocoRoco Midnight Carnival’s November, is set on an island where plenty of the little blobs are hanging out. There’s trumpet face guy, beehive house, and a whole bunch of other sh*t that doesn’t make sense, and then there’s you, standing in the middle of all of it, wondering why you’re in Home and not actually playing LocoRoco?

I love the image above. The girl (probably a guy) looks uneasy around all of that weird crap.