I definitely remember when Beyond Oasis was released for the Sega Genesis back in 1995. The game immediately sparked my interest the minute I laid eyes on the intriguing title’s first screenshots in an old issue of GamePro (or was it EGM?). And although the action-RPG looked amazing to me, I never got around to actually playing it — it was one of those rare games that, for whatever reason, I missed out on.

As the years past, I always told myself I would go back and try it. Beyond Oasis was one of those games that looked like it was made for me: It had colorful graphics, a unique setting, and reminded me a lot of Zelda, a series I have always worshipped.

In fact, many of my friends — including fellow cast members of the late (and great!) podcast RetroforceGO! — held such fond memories of Beyond Oasis, ranking the game as one of their favorites on the Genesis. A “classic”, most people were calling it.

It wasn’t until recently that I finally got around to playing it. Downloading it on the Wii’s Virtual Console, I made myself comfortable on the couch, wrapped myself in a blanket, and prepared to play a classic retro game that had unfortunately passed me by.

I was excited. Playing a classic game for the first time is always such a wonderful experience.

It was about two hours into the game when something funny happened. I wasn’t enjoying myself.

I wasn’t enjoying myself at all.

Maybe something strange was happening, I thought. Maybe I just wasn’t in the mood or mindset to play an older Genesis game.

I put the game down and revisited it a few days later. 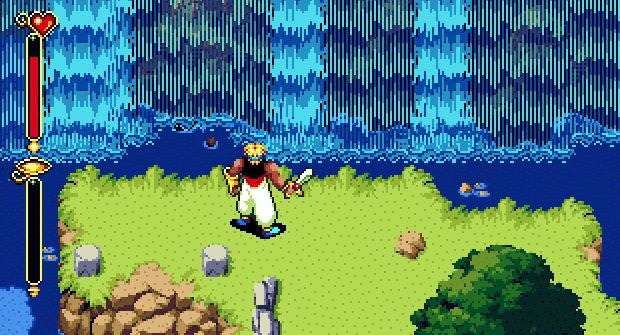 Starting over from the beginning, I pumped myself up by really taking my time and putting myself in a complete retro state of mind.

In a shocking turn of events, I actually liked it even less the second time! Me. Not being a fan of a retro game! Something was amiss.

After another few hours of trudging through the game, the realization finally kicked in: I officially didn’t like Beyond Oasis.

There was something about the game that didn’t sit right with me. While I admired the game’s graphics, the gameplay never clicked with me. I had trouble hitting enemies and running around the screen. What I heard was a stellar Link to the Past clone felt stiff and unpolished in comparison.

The bosses, which everyone who had recommended the game had praised, were sloppy and hard to defeat. Not challenging, mind you, but tough to conquer due to — gasp! — poor design.

Even the music, composed by the legendary Yuzo Koshiro, sounded subpar.

The game really bothered me.

After finally accepting this harsh disappointment, I had to admit that I just wasn’t a fan of Beyond Oasis.

The “classic” let me down.

Now it’s your turn! Has this ever happened to you? Have you ever gone back and played a game everyone told you was a “classic” and discovered that you really didn’t like it? Has a game left you wondering what all the fuss was about?

And just to throw out another more recent example, I had a similar reaction to Dead Rising. I finally played it after purchasing its sequel, and just couldn’t get into it.

Take to the comments and let the discussion begin!