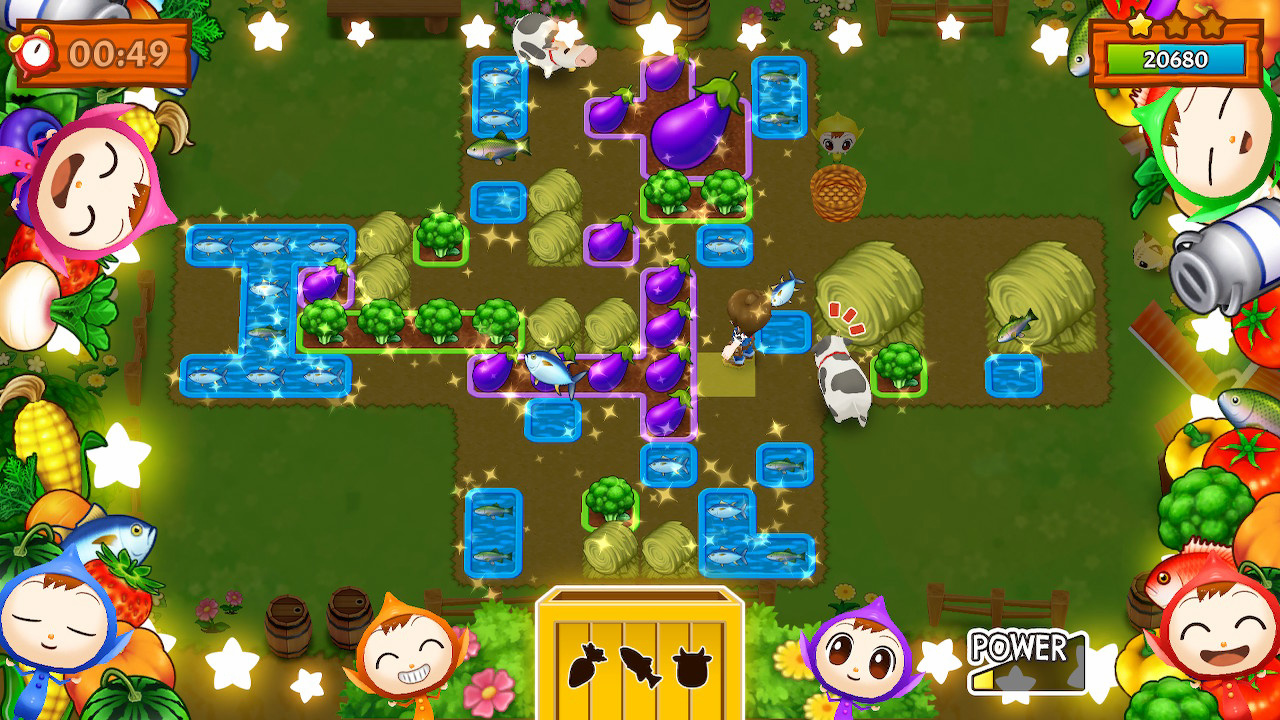 Since it first launched, the Nintendo Switch has been home to some of the best co-op games on the market. On day one, you could pick up Snipperclippers, an inventive and hilarious game for couples and friends. The Overcooked series has absolutely sparkled on the console, and the pick-up-and-play nature of the hardware has sparked a renaissance of couch co-op games. Indie hits like Death Road to Canada and Lovers in a Dangerous Spacetime have flocked to the system while bigger developers like Blizzard and StudioMDHR have found success porting their popular co-op games over.

Natsume is the next studio bringing multiplayer love to Switch. Its upcoming spin-off of the Harvest Moon series, Harvest Moon: Mad Dash, borrows liberally from its contemporaries to create one outstanding little puzzle game. 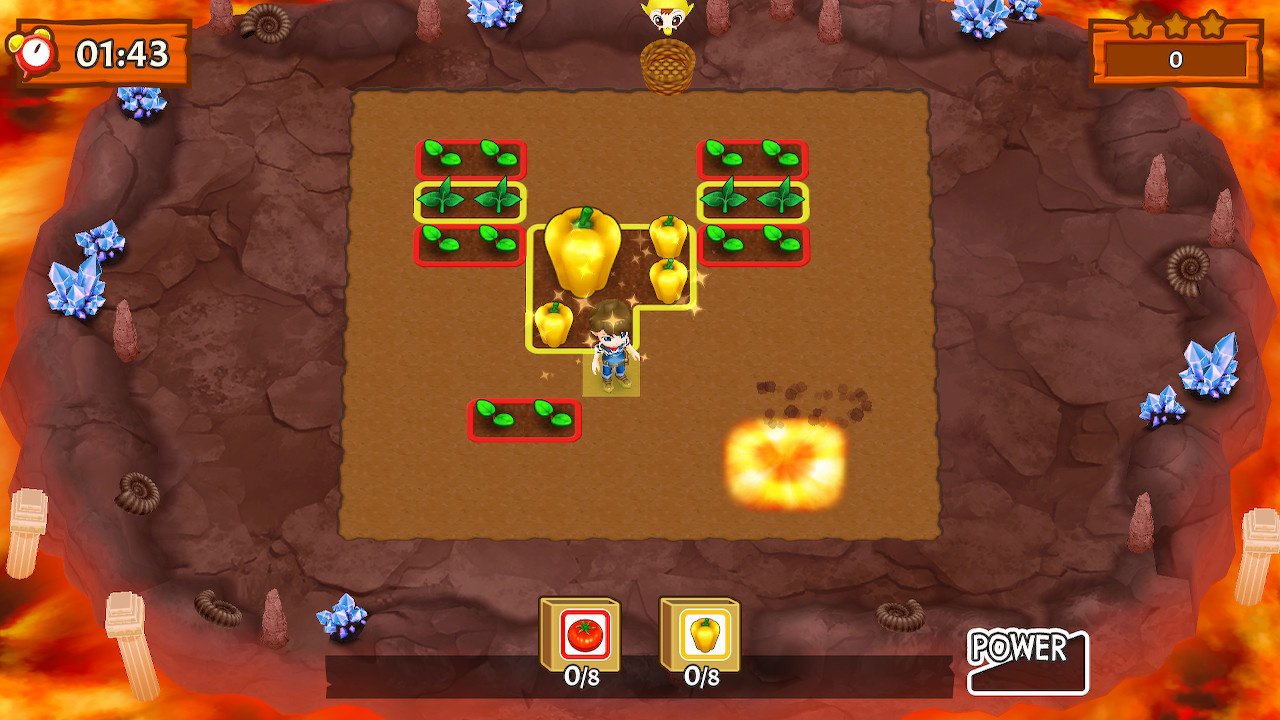 When boiled down to its very essence, Harvest Moon: Mad Dash is a color matching puzzle game. When you start a level, the puzzle field will be littered with two or more different types of crops. These crops will either be by themselves or linked with one or more crops. The object is to combine these crops into squares, at which point they blossom and become bigger crops. Combine those crops to make even bigger squares and you’ll end up with fully ripened crops ready to be harvested. In other words, combine four small potatoes to make a big potato. Then combine four big potatoes to make a giant potato.

Like Overcooked, Mad Dash is divided up into stages where the goal is to get a high enough score to collect three stars. Each stage is located on an overworld map with settings that stretch from the farm and town all the way down to the underworld and up high into the sky. There is a story here, something about a broken lighthouse that needs fixing, by my attention was more fixated on creating as many massive crops as I could in the short allotted time.

For my hands-on with the game, I teamed up with one of the Natsume booth operators to see just how well two strangers can work together in a game that requires good communication. On the first stage, we split our focus on our own individual crop. He handles the fish and I tend to the pumpkins. I get the hang of it quite quickly, years of puzzle experience no doubt bolstering my ability, but at the end of the level it’s clear that just splitting up wasn’t enough. We scored high enough to get two out of three stars but didn’t come anywhere close to getting enough points for that final star. 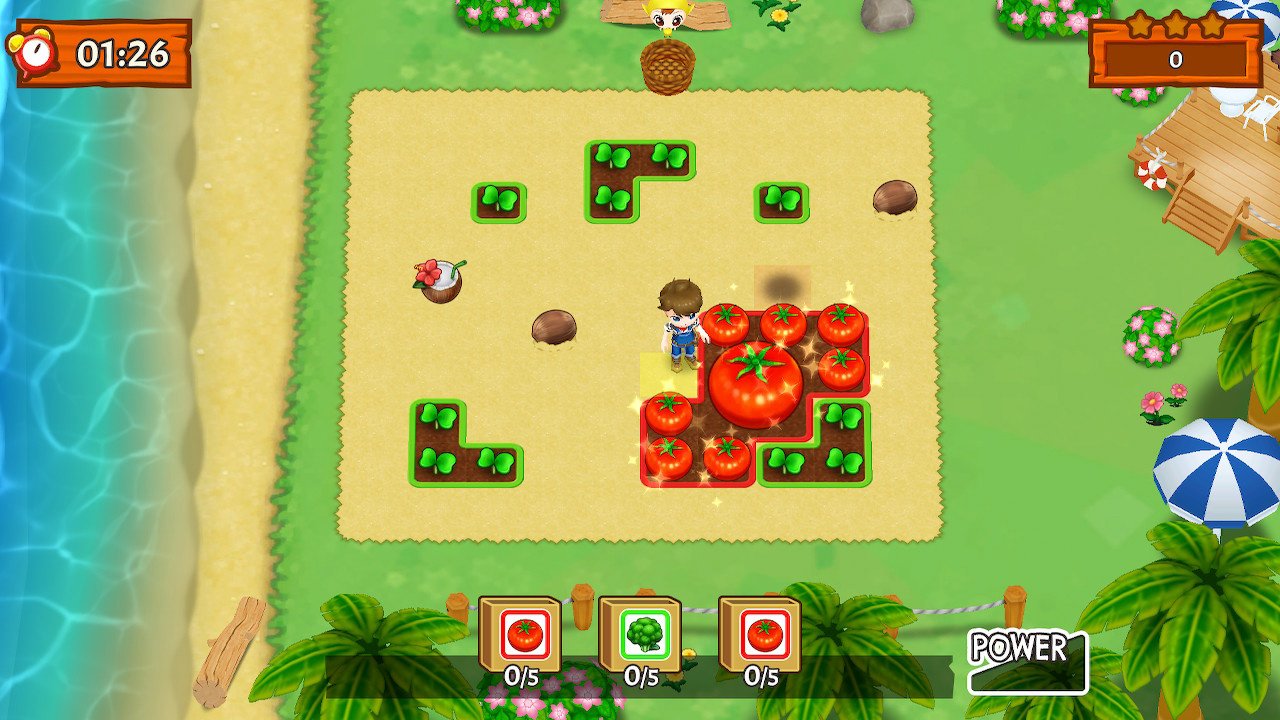 On the next level I realize what I was doing wrong: I wasn’t actually harvesting my plants, just making them bigger and bigger and until they wouldn’t grow any more. On the next level, one that tasks us with handling fish and hay while feeding cows and avoiding falling coconuts, I stepped my game up. We still split the crops duties but communicated more to help one another out. I kept tabs on where coconuts were about to fall to move both our crops so they wouldn’t get destroyed.

As the hay piled up into larger and larger bales, the cows would mosey on over to eat. Well-fed cows produce milk and that was what I was focusing on harvesting in this stage. Keeping everything in check proved to be quite frantic, however, because I was now more familiar with how the game was meant to be played, I work in tandem with my partner rather than independently from him, building up a meter that initiates a “fever mode” where every crop can be harvested right away. Our score jumped up massively over the previous level, netting us all three stars in a single go.

Harvest Moon: Mad Dash may not be the biggest or most electrifying game I play at E3, but the 15 minutes I spent with it is easily the most fun I’ve had at the show so far. It’s not as original as something like Harvest Moon Frantic Farming, but that really doesn’t matter when the core gameplay is such a blast. Harvest Moon: Mad Dash launches this fall for Nintendo Switch and PlayStation 4, and it will retail for $29.99.