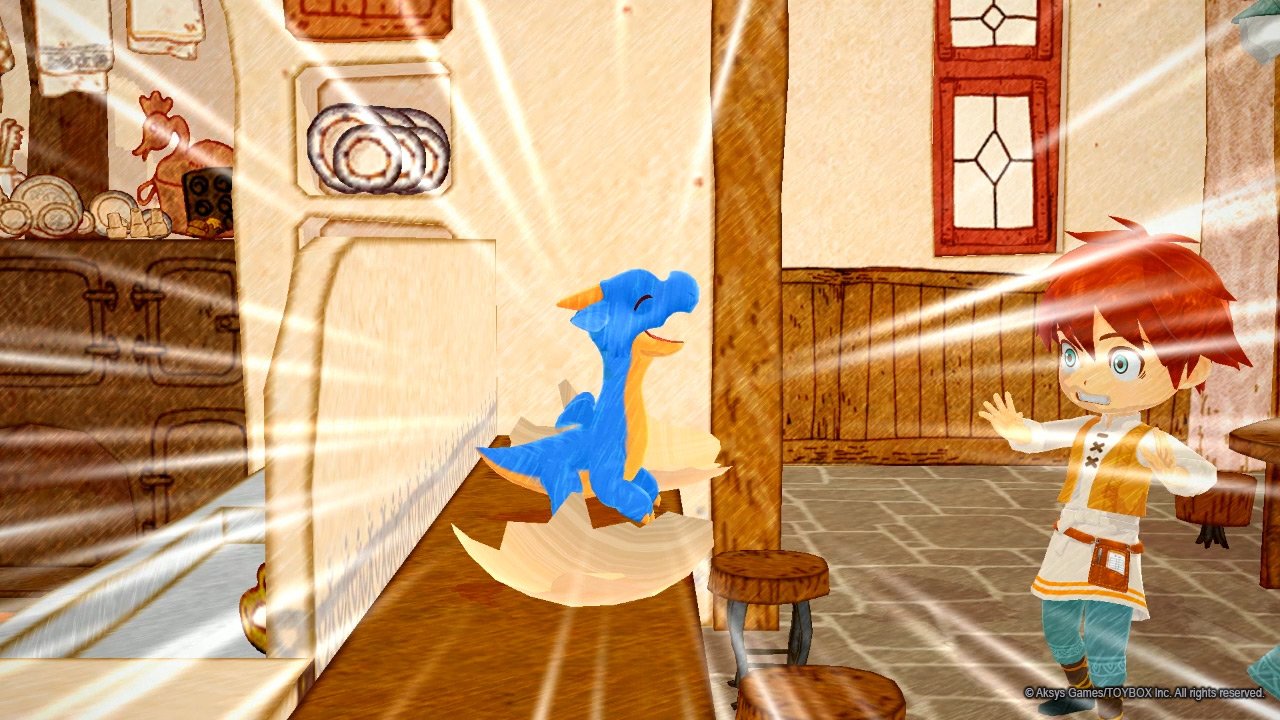 Game is totally cute with personality to boot

“Personally, I love fighting games, and shooters, and violent games in general.”

That wasn’t exactly what I thought I’d hear from Yasuhiro Wada when I asked him what types of games he enjoys playing. Friday afternoon, just outside of San Francisco’s Financial District, I sat down with him, along with Akibo Shieh, founder and CEO of Aksys Games, to discuss Little Dragons Café. The game, releasing later this summer, is a lifestyle-shop sim where players control one half of a set of twins as they try to keep a café in business while raising a dragon that is the key to waking their mother from a deep slumber. That may sound outlandish, but it’s par the course for one of gaming’s most resilient creators.

I didn’t appreciate the brilliance of Mr. Wada until I was in my 20s. Growing up, my hands firmly planted in an SNES control from the moment I finished my homework to the moment it was time for bed, I couldn’t wrap my head around the idea that farming in Harvest Moon could be fun. “Farming was for hicks,” I’d tell myself, not realizing until years later I grew up in a small town full of hicks that’s now full of meth but that has nothing to do with this story. To me, having fun was about saving princesses with Link, gunning down Aliens in Contra, and hitting home runs with HGH-addled baseball players in Ken Griffey Jr. Presents Major League Baseball. Farming? Pfft, farming is dumb.

It wasn’t until 2009 that I really gave the franchise a shot. Wada had long moved on from the series at this point, and the title that convinced me to give it a go had nothing to do with the main series. It was Harvest Moon: Frantic Farming, my favorite puzzle game on the Nintendo DS. The absolute joy that game filed me with convinced me to really give the mainline franchise a go with its next entry, Harvest Moon DS: Grand Bazaar.

Even though Wada wasn’t a part of the development team on this title, it followed the formula he established more than a decade ago; a formula that found a new generation of fans not too long ago with Stardew Valley. Frantic Farming and Grand Bazaar showed me how much fun a more laid-back gaming experience can be, experiences Wada continued to produce with his Toybox Inc. development company.

Sure, Hometown Story was a swing and a miss, but last year’s Birthdays the Beginning — re-released on Switch this year as Happy Birthdays — is one of the most unique titles I’ve ever played. Again, like with Harvest Moon/Story of Seasons/Bokujo Monogatari, Birthdays is an engrossing experience that engages people through meaningful activities that promote harmonious ideas; the polar opposite of the types of games Wada himself plays.

“I play a lot of open-world RPGs. Like Fallout 3 and Skyrim. There are fighting and shooting elements in those games,” he explained. “But if all developers were to make only those types of games, I don’t think the gaming industry would last. There are a lot of people out there who are gamers without having played those violent games. They enjoy something else, so I feel I have to make something other than those genres to reach them.”

That philosophy has guided his career from Harvest Moon to Little Dragons Café and every title in-between. For Harvest Moon, a farming sim simply wasn’t a genre of game. Now, it’s ubiquitous within the industry. What’s changed for Mr. Wada is how he approached the development process of his new title.

“Until now, the way I have been making games is to make the game system first, and then add in characters and all the meat of the game afterward,” he said. “For Little Dragons Café, I worked on this backward where we thought of the characters and the story and the art style first, and then decided how to turn all that into a game.”

The characters and art direction are a collaboration between Mr. Wada and the artist behind the original Harvest Moon. The two are working together for the first time in a decade, transforming their love of Japanese television dramas into a game people around the world can enjoy.

“Both the artist and I, we like these Japanese dramas, different Japanese dramas, where the theme was almost a run-down inn or restaurant that’s ready to go bankrupt and it was revived by customers. So that was the inspiration on that side of the game. The similarities of the dramas we were watching, basically everyone helping run these businesses were misfits or losers. Normally you’d think all these misfits getting together would not create a successful business. But even with all these misfits, one person with a weakness, when you have several people working together, they’d be able to overcome a lot of difficulties. That’s sort of what Little Dragons Café is all about.”

The café is just one of the aspects players will experience. There is also the little dragon they have to raise from hatchling to full-grown flier. Mr. Wada said its inclusion was chosen because of how the medium usually depicts dragons.

“I like dragons. Actually, I love dragons,” he said. “Usually dragons are depicted as enemies in video games where you have to basically kill them or attack them. So rather than doing that, I wanted to implement a dragon where it’s there alongside you to be your buddy as you explore the land.”

Nowhere is this love of dragons more evident than with a simple gameplay element I found in my hands-on session with the title. Little Dragon Café is an AA title through and through. It may lack the production values of its more expensive siblings, but it has a chasm of charm that just might sweep players off their feet. I only had around 25 minutes to spend with the game and a great chunk of that was a cutscene introducing the feisty Ipanema, the second addition to the café crew.

The small sampling of actual gameplay I experienced fit right in with my expectations. Cooking up recipes for café customers is presented as a rhythm micro-game. When I finish a recipe, the item is added to the menu and is rewarded with stars based on how well I do. I can always retry a recipe if I screw it up, and while early rhythm games are simple, they will grow more complicated later in the game.

The controls of the mini-game are tight, which is something I can’t say about general character movement. It’s a bit slippery and while exploring the island – gathering recipes strewn about like Hansel and Gretel passed through, but instead of leaving breadcrumbs they dropped pages of Julia Child’s Mastering the Art of French Cooking – there were a few instances where I’d position myself for a button prompt only to move an inch too far and lose it, forcing me to wiggle my character back to the right spot. There was also some pop-in on the PlayStation 4 and those dreaded invisible barriers that take some of the fun out of exploration. But the island is full of character, and that simple gameplay element I mentioned earlier absolutely seals it for me: Little Dragons Café has a dragon petting button. Much like the hug button from A Boy and his Blob, I sat there for three minutes just petting my little dragon. Hardcore adorable.

The game is still a few weeks away from release, but Wada is already thinking about the future. He confirmed during our interview his team is already at work on his next project. It’s difficult to say what kind of game his next title will be based on his recent output, but one thing we can guarantee is it won’t be free-to-play.

“As a game creator, I don’t think about which platform I want to develop for. I just want to make good content, whether it’s on mobile or consoles, it doesn’t really matter to me. The one thing I don’t want to make is a free-to-play game. Whether you’re downloading or actually buying physical, so long as you’re paying money and playing the game, there’s no difference if it’s on mobile or console. What I don’t like about free-to-play is it’s a free game that’s basically a monetizing machine where you have items to buy. That’s what I want to avoid. To me, that’s not creative. I don’t want to make something that’s not creative. I want to make start to end games as one whole product. Even as a consumer, spending five to ten dollars to play a game from start to end, doesn’t that make you feel comfortable?”