The next title from Harmonix won’t be anything similar to what we know the music-focused studio for. It’s not another spin on Rock Band or anything else resembling note-matching perfection. It’s not even really a video game. It’s a physical card game that’s pushed along with the help of an app on a tablet or smart phone.

DropMix has just been announced but it’s not a true Harmonix joint. This effort is a collaboration between Harmonix and Hasbro — the former taking responsibility for doing all the cool music stuff, and the latter tasked with creating the physical product that makes it all go. The partnership makes sense when you consider each’s relative strength.

Here’s how it works: Each card has an NFC chip in it that contains a part from a song. So one card might just have the bass line to Meghan Trainor’s “All About That Bass” or the “Ooh-wa-ah-ah-ahh” vocals to Disturbed’s “Down with the Sickness” (this was a card I played as often as possible). The DropMix board has five slots for the five different card types. Players take turns dropping their cards and the game remixes them over the top of one another on the fly. 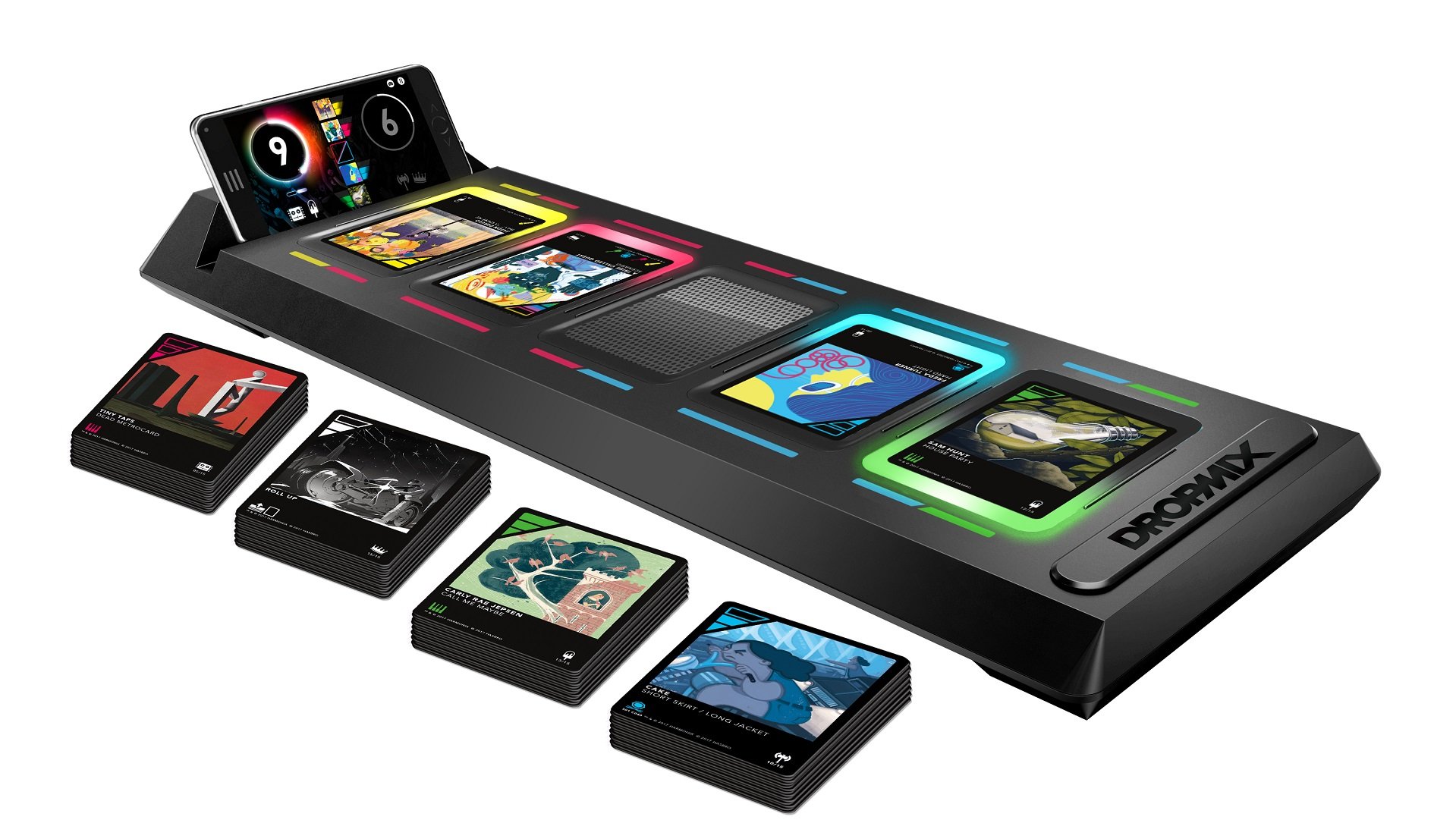 It’s impressive from a technological standpoint, the way that Harmonix is constantly getting better at manipulating music. This has been a natural progression for years now. The likes of Fantasia: Music Evolved and Rock Band 4‘s freestyle guitar solos demonstrating how the studio has integrated creativity into a genre that typically only emphasizes doing exactly what the screen says to. Harmonix is always inching closer to the player feeling as if they’re the one who is making the music.

However, competition in DropMix seems to belie the notion of creative control. We were shown Clash mode (one of three that will be available), and it had us teamed up and aiming to score as many points as possible. The cards have different point values and the goal is to cancel out the other group’s cards by placing stronger ones. The NFC functionality works such that the game will read the top card and this will cause the entire mix to change.

But, in this situation, players aren’t paying attention to what sounds good; they’re focused on whatever cards bring them closer to victory. This feels like a problem. DropMix provides the tools to create some genuinely interesting mashups of popular songs, but the player isn’t necessarily rewarded for doing that. They’re rewarded for playing high value cards, regardless of how it makes everything sound. Maybe (and hopefully) that will be addressed in the other two modes that haven’t yet been revealed. 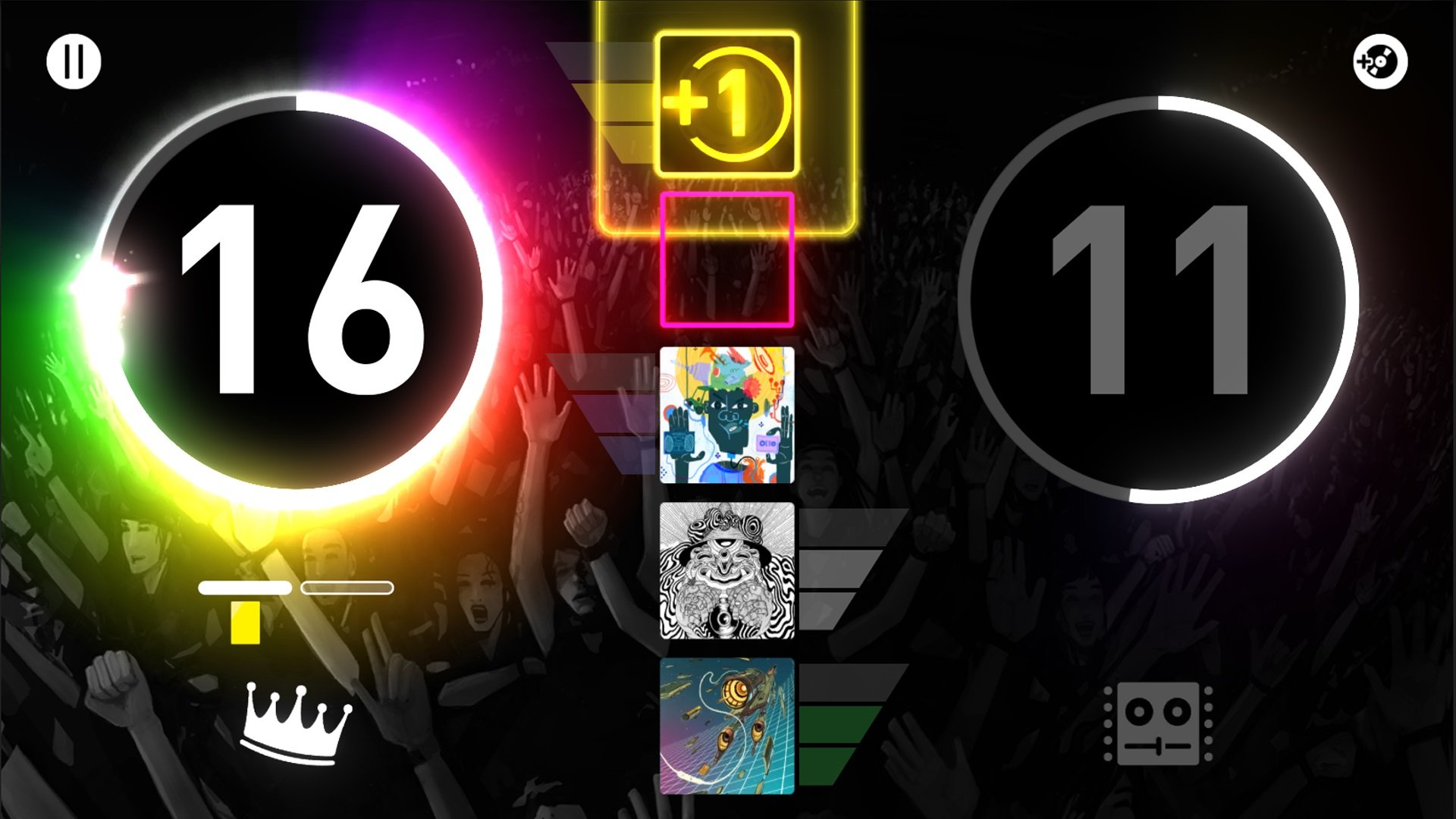 The upside is that Harmonix’s tech seems able enough that most any combination of cards will sound okay. There are countless opportunities to discover a blending of genres that you probably hadn’t considered before. In the case that you stumble across a particularly good one, DropMix allows for saving locally to replay at any time.

The way in which one plays DropMix needs to be considered too. Hasbro is very clearly targeting that “young and social adult with disposable income” demographic, and this is positioned as something of a party game. For those who intend to play this in a somewhat noisy setting, an external speaker will almost certainly be necessary. The speaker on a smart device isn’t going to fill a room in a satisfactory way. Also, DropMix can be hooked up to a television, which seems superior to everyone squinting at a phone screen.

DropMix will release this September. It’s priced at $100, and that comes with the board and the starter pack of 60 cards (many of which are songs in Rock Band 4). Somewhat interestingly, we were told that this is the type of product that will be found in the vaguely broad electronics area, not specifically either the video game or toy sections. After release, DropMix will get expansions of 16 cards for $15 and 5 cards for $5. Hasbro says that a total of 300 cards will be available this year.

The business model feels like an uncertain one. Hasbro and Harmonix are betting enough people care about casually remixing music that this will be successful. It seems to me that those who are passionate about tinkering with music have more flexible ways to do it, and that those who love competitive card games have much more in-depth options. DropMix feels like one of those neat things that nearly everyone would be interested in testing out if it were sitting in front of them, but that hardly anyone would pay $100 just to see if their friends liked it.