Before the folks at Harmonix Studios put themselves on the map with Guitar Hero and Rock Band, it was known for the cult hits Frequency and Amplitude. Blending fast-paced rhythm-based action with mesmerizing visuals and an electronic soundtrack, players could tap their feet along with the beat while using quick reflexes to achieve the high score. Though the titles never lit the charts on fire, they garnered a cult following and were fondly remembered among fans of rhythm games.

With the success of Rock Band, Guitar Hero, and Dance Central under their belts, the developers at Harmonix decided it was time to revisit the long-dormant series. Keen to show off an early build of the game in time for the upcoming PlayStation Experience event, the devs were confident they nailed their reboot of Amplitude.

And with the success of their Kickstarter campaign, they’ve definitely got an audience ready to check out the reunion with the long-missed series. 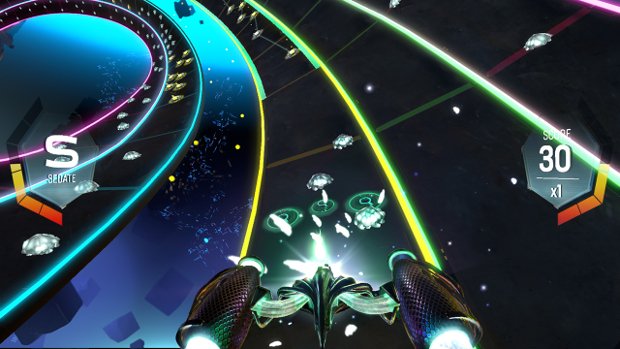 “This opportunity is to make the game we always wanted to,” said product manager Annette Gonzalez while discussing the development of the game. As a reboot of the original, Amplitude features both an expanded track list and gameplay system. Even after the success of the games that followed, the developers wanted to have a shot at creating another title in the vein of Frequency and Amplitude.

“People really, really liked those games, they have fond memories of them, I have fond memories of them — I played FreQuency and Amplitude a lot back in college — but apparently they didn’t really sell very well,” said communications lead and former Destructoid editor-in-chief Nick Chester. “People loved it, it reviewed very well, but nobody bought them, so therefore we didn’t make another Amplitude game and moved on to Karaoke Revolution, Guitar Hero games with Konami and Activision.”

With the rise of game development via Kickstarter, Harmonix figured it was the perfect time to get the next game going. With its crowdfunding campaign, the studio wanted to gauge the current interest for the return of its earliest titles. 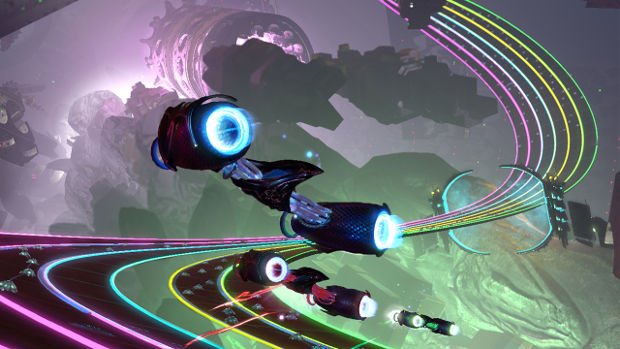 “Kickstarter was a great opportunity for us to say, ‘well, you wanted another Amplitude game, right? We have permission from Sony to actually go ahead and do it, but do you really want this game, prove it.’ If they were really interested in it, then it would get funded, and it did,” said Chester.

For the uninitiated, Amplitude tasks players to ride the musical tracks as they match up each beat and verse with the corresponding buttons. With each track spread across multiple lanes, you’ll have to actively switch between them to maintain your multiplier. If you miss too many verses and beats, your ship will cease function and end the track. With each timed beat, you rack up points and build your multiplier to activate special abilities, such as slow-mo, which slows down track speed, turning snazzy electro into a soothing and calm ambient pieces.

By far, the most apparent aspect of the game was how challenging it was. My first crack at the game was on medium setting, and I barely made it halfway before losing. Perhaps it was because I had a hard time grasping the rhythm, but I initially felt a bit overwhelmed by the pace. Thankfully, playing a few tracks got me in the swing of things. Though I certainly still had my work cut out for me, considering how easy the folks from Harmonix made it look during the more intense tracks.

As with all of Harmonix’s titles, music is the core element of the experience. Featuring over 20 tracks, including licensed music from artists such as Anamanaguchi, Freezepop, and Kasson Krooker, Amplitude definitely seeks to reaffirm the studio’s approach to music games. Moreover, Harmonix has also has incorporated original compositions that not only evoke the same hyperkinetic style of the original, but also manages to tell a consistent story with each passing track.

“They [original songs] have this dark and electro vibe to them to tell you enough about the narrative,” said Nick Chester. “All the tracks in this build were written in-house by the folks at Harmonix, all of the core story for the game was written by us, and outside of that you can unlock other songs from other artists.” 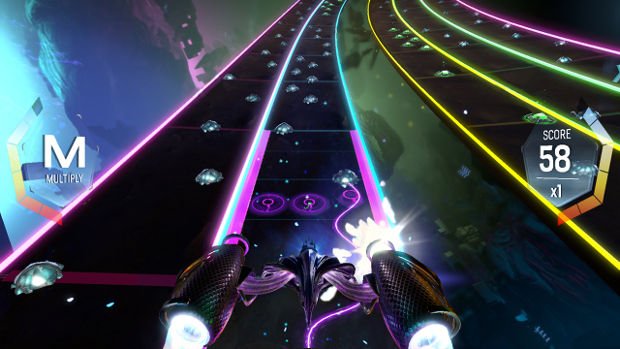 While much of the attention will be focused on the music, the visuals also do a lot to bring players into the experience. Amplitude‘s visual aesthetic feels like a mix between the bombastic and otherworldly Rez, with the vaguely familiar look of the digital world from Tron. Moreover, the visuals become more pronounced and striking as the track reaches crescendo, taking players on a trek through light and sound.

Not content with offering the same experience with new visuals and sounds, Harmonix wants to implement features into Amplitude that take advantage of modern gameplay. In addition to online leaderboards for tracks, players can also engage in multiplayer matches against others locally. During our demo, we tried out the four-player battle mode, which pitted players against each other on the same track. As you can imagine, things got pretty hectic as every had to find an empty lane to score points. After each verse, the lane would collapse, forcing everyone scramble for the next lane to maintain the multiplier.

I came away pretty pleased with what I played. Harmonix has certainly refined its craft for music games, and even though the title is only 60-70% complete, it is on track as a product that will reassure fans of the original and those looking for a unique and challenging take on rhythm action. Amplitude is one title you’ll want to keep an eye out for next year.