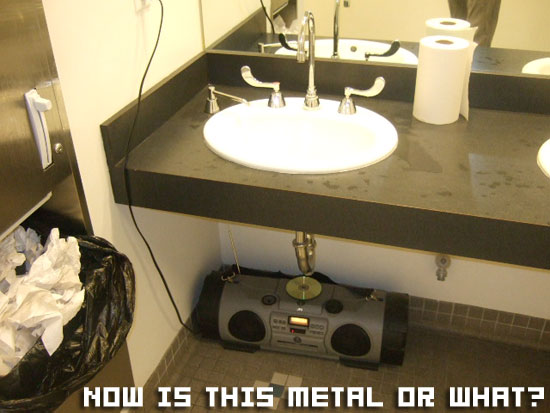 For a company that exudes so much rock, it was surprising to find that Harmonix’s home was an unassuming little Masachusetts office building. Smack in the middle of Cambridge’s hip and ever-growing Central Square, there’s really nothing about the building that screams “We made one of the most influential music game of all time — recognize!”

Inside is a (slightly) different story, and if you expected Harmonix’s staff of 150 plus to mostly be comprised of cool, hipster musician-types, you’ve nailed it. And while I kept being reminded that the offices were relatively new (the team had moved in only a few months prior, in the middle of Rock Band‘s development), it definitely felt like the team had made themselves at home.

Action figures were perched on desks, and rock posters and concept art adorned the walls. It seemed it was impossible to walk into a room without seeing a table full of dismantled Fender guitar controllers, or a lone bass drum pedal sitting in the corner. A full-sized S.T.U.N. Runner arcade cabinet (which no one on the staff could tell me where it came from) sat in the corner of the communal lunch area.

Sound like a cool place to work? All of the Harmonix staff I spoke with seemed to think so, and I was impressed by how passionate and excited they were about their games. Check in tomorrow for my full (and likely very lengthy) review of Rock Band to see if that enthusiasm translates into rock n’ roll greatness.