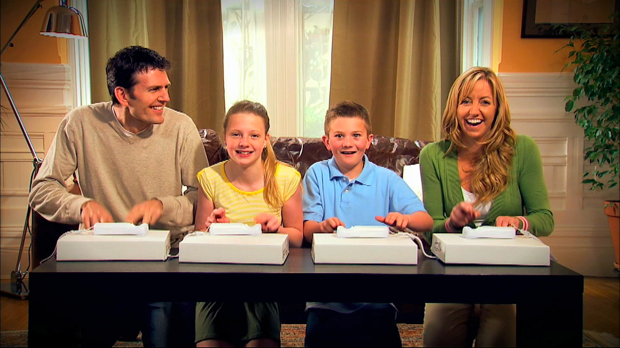 Let’s Tap. It’s a game where you beat on a cardboard box to make things happen on a television screen. If you’re a Wii owner and you’re not down with that, there’s obviously something wrong with you. Sega recently dropped a new trailer (a “Party” trailer, no less) for the game showing a particularly happy family engaging in a rousing gaming session. If they’re having fun, then obviously you will.

OK, I’ll drop the pretense — this game scares the hell out of me. It even beats voodoo on my list of “things to avoid.” I also don’t like incantations, skulls, frogs, badgers or rhythmic thumping. Sorry, it’s just how I grew up.

Anyway, Lets Tap has a total of FIVE GAME MODES (sorry, my caps lock key was stuck) and you’ll see it on store shelves this summer. I’ll avoid it like the plague — or a badger — but you may decide not to after viewing the trailer after the break.

So, what do you guys think? Instant buy? It does ship with a cardboard box, you know.