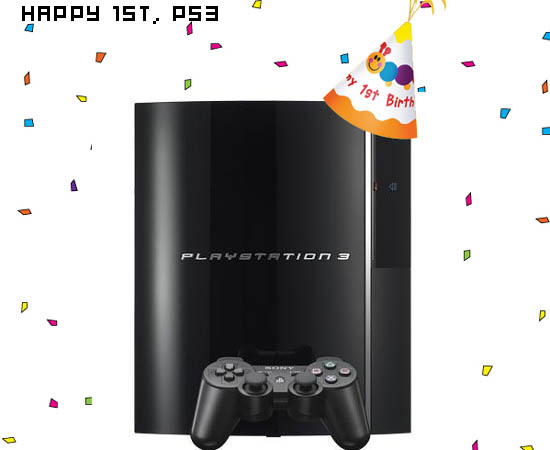 The little one, dubbed PS3 (what a strong family name!), was born to a Japanese family on a cold November morning one year ago just past midnight. The 11-pounder was impressive and healthy, and thousands gathered ’round the babe to witness the miracle.

Since then, PS3 has been hard at work, living up to the name of his father and grandfather. He’s only one-year-old, and his first year hasn’t always been smooth, but he’s got a lot to be proud about already.

The PS3 got off to a slow start, but its steady growth shows promise. In one year, the system saw the launch of the PlayStation Network, helped kick off Blu-ray technology, and has now sold over 5.6 million units worldwide.  Since the launch of the 40GB and 80GB models, sales have increased by 192%, and the system has outsold the Xbox 360 in Japan 3-to-1 this year.

Sure, the PS3 has some peers to contend with, but strong titles like Ratchet & Clank Future: Tools of Destruction, Warhawk, and Uncharted: Drake’s Fortune, prove that it can hold its own, while upcoming games like Gran Turismo 5 Prologue, Metal Gear Solid 4: Guns of the Patriots, Unreal Tournament 3, and Haze show real promise for its future.

Happy Birthday, PS3. Keep your head up and your nose clean. Keep on doing what you’re doing and don’t listen to your detractors — you’re on the right path.

Go on, blow out that candle. We already know what you’re wishing for.