Here’s lookin’ at you, Doom

My, how time flies. Today, we’re 21 years removed from the launch of one of the most influential videogames ever, Doom. It may not have been the original first-person shooter, but it was certainly the most important one in my life. Well, indirectly.

That prestige actually goes to Final Doom. Back in fourth grade, I made a new friend. We went to his house one day after school. The first thing he wanted to do was to boot up his computer and show me Final Doom. I remember being blown away by how awesome it was.

We weren’t taking legit runs at Doom, mind you. IDDQD, IDKFA, and IDCLIP made sure that we could run wherever we wanted and kill whatever we wanted with absolutely no problem. Cyberdemons and Arch-viles fell by the hundreds. And, there was always a squeemish glee to watching a Cacodemon die in a messy pile of gloop. 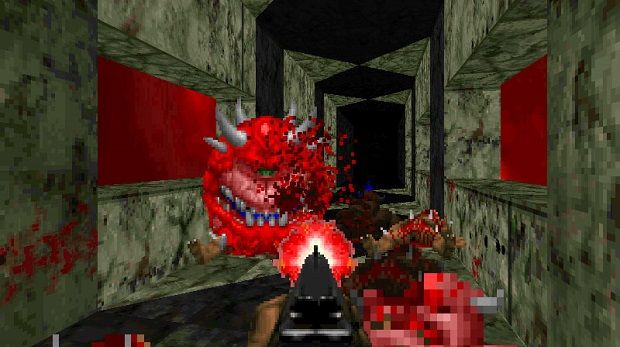 By the time my birthday rolled around, there was only one thing I wanted — Final Doom. My parents delivered and then some, as I unwrapped both Final Doom and Doom II that year. The latter held a bit more shock value as it had me staring down John Romero’s severed head and murdering childhood figure Commander Keen.

Doom was also my introduction to online play. Again, kind of. My computer-savvy uncle worked some networking magic to make it so that friend and I could play Final Doom over the phone line from our respective houses. In hindsight, one-on-one deathmatch wasn’t the most thrilling multiplayer, but at the time, it felt like the future.

The funny thing is, there are many ways this story could’ve gone differently. Right around the same time as my introduction to Doom, GoldenEye 64 came out. If I had played that first, it may have significantly diminished my love for Doom. The same can be said for other first-person shooters such as Wolfenstein. But, as it stands, Doom was foot in the door to FPS games and the world of PC gaming. Suddenly, my Sega Genesis seemed a bit dated.

Just like Chris last year, it’s impossible to deny what an effect Doom had on my life. It may not have been Doom proper that I played over and over, but it obviously laid all the groundwork for those future titles that I loved so much. It wasn’t until years later that I tried the original Doom, but the sentiment held up, much to my delight.

Now that you’re of age, let me buy you a beer, Doom. It’s the least I can do.