The Game Boy left many slain in its wake. From the very beginning, many have challenged Nintendo’s dominance in the handheld market and all of them failed. Some of those systems made a bigger splash than others, but Nintendo would inevitably hog the market in perpetuity, with even Sony’s PlayStation Portable failing to overtake the Game Boy’s successor, the Nintendo DS.

Regardless of how badly other handhelds were trashed by Nintendo, it’s a pretty interesting graveyard to dig through. The Atari Lynx was physically massive, but actually a pretty neat console; the N-Gage was a silver taco; and the Neo Geo Pocket was totally awesome, and I want one. Then there’s the Bandai Wonderswan, which was developed by one of Nintendo’s most prolific hardware designers, Gunpei Yokoi. The former mentor of Shigeru Miyamoto, Gunpei Yokoi departed Nintendo soon after the massive failure of the Virtual Boy (whether this was related is debatable) and set to designing his own console. Sadly, he died in a traffic accident before he could see the release of his creation, but the little handheld actually made a modest impact in Japan.

The Wonderswan was released in March 1999, making it 20 years since it left a pockmark on the industry. Happy birthday, pockmark. 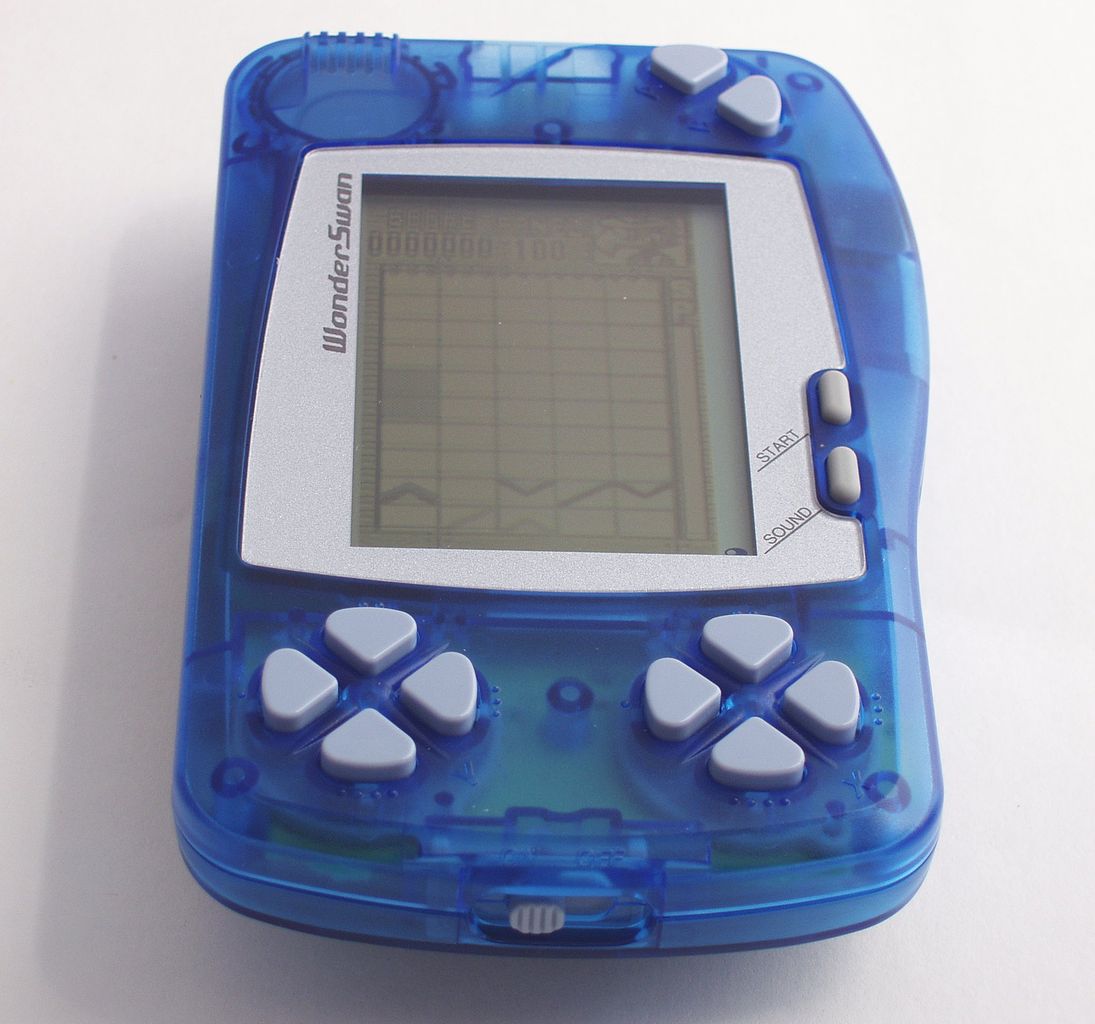 Many of the Game Boy’s opponents had the same strategy for approaching Nintendo’s monochrome monster: more power means more popular. At the turn of the ’90s, both the Atari Lynx and the Game Gear had significantly more horsepower than the grey brick, but their colorful, backlit screens weren’t quite enough to court customers away from Tetris. Even in more recent eras, the PlayStation Portable and Vita helped prove that powerful hardware doesn’t trump irresistible games in the handheld market.

Both the Neo Geo Pocket and the Wonderswan took a different approach. They cut out the bells and whistles and present customers with a console that has a similar price tag to what Nintendo was peddling, but with slightly more power. The Neo Geo Pocket, as wiz as the system was, sold about 2 million units and then died with the rest of SNK. The Wonderswan, conversely, fared a bit better.

When the Wonderswan first hit the Japanese market in early 1999, it was strictly monochrome. Giving it a leg up over its direct competition was a 16-bit processor and a display that pushed a palette of eight shades, as opposed to the Game Boy’s four. The design itself was unique in that it provided a wider screen and two sets of buttons, allowing the system to be played in both portrait and landscape mode. To top it off, a single AA battery could power the little console for 40 hours.

On the other hand, there were some major downsides. The biggest complaint I personally have about the hardware was the lack of headphone jack and the fact that the volume control is just a single button. This resulted in the Wonderswan having four volume options: mute, too quiet, too loud, and ear-perforating cacophonous. You could buy a headphone adapter that plugs into the expansion slot, but after three hardware revisions, this problem was never addressed. It also has the same issue that a lot of non-backlit screens did, where you have to hold the screen angled just right towards a light source or you can’t see anything. The struggles we had to endure in those days.

It was pretty bold to launch a competing handheld in 1999. Not only had Nintendo just released the Game Boy Color, but Pokémon fever was still raging strong, with a new entry releasing at the end of the year. Bandai had to come out swinging, and it did so, releasing two Digimon games in its first month as well as versions of Puyo Puyo 2, Mega Man, and Nobunaga’s Ambition. Following that was a series of other excellent titles, including exclusive entries from series like Makaimura (better known as Ghosts ‘n Goblins over here) and Clock Tower.

Less than a year later, in December 2000, Bandai launched the Wonderswan Color, once again with a low price tag to try and compete with the Game Boy Color. But, before Bandai could get the system to market, Nintendo took the wind out of their sails by revealing the Game Boy Advance; a full-color system with specs that could trounce the low-cost Wonderswan. It would be over a year before that system reached the market, but even the promise of a new portable from Nintendo lured away developer support and consumer buzz.

In the meantime, Bandai attempted to strengthen its still meager market position. An enhanced version of Final Fantasy was released in the first year of the Wonderswan Color, followed by versions of Final Fantasy II and IV in subsequent years. Pocket Fighter and portable versions of Guilty Gear would scratch the fighter-fan itch. There was even a version of Fire Pro Wrestling! Anime fans, especially those into Digimon and One Piece, would find themselves welcome on the handheld, with the full force of the Bandai and Banpresto brands behind the system. So, I mean, if you’re big into Meitantei Conan or Gundam, the Wonderswan is the handheld for you. So long as you can read Japanese. 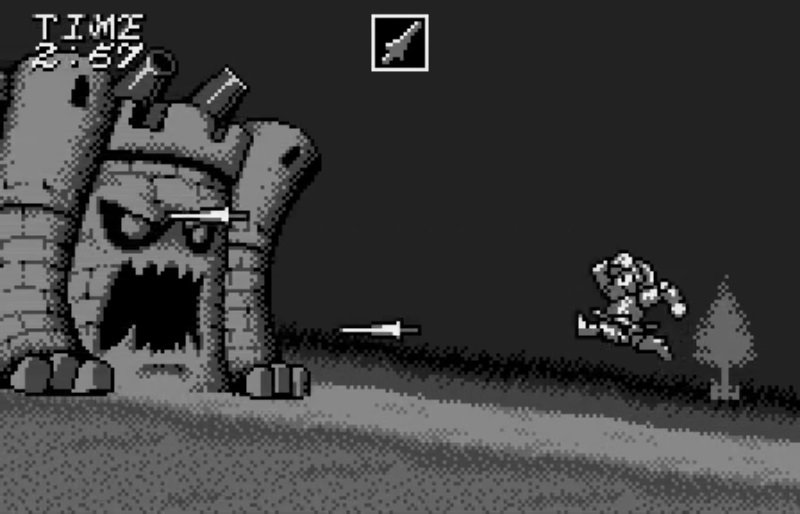 There was no saving the Wonderswan from the Game Boy Advance, though Bandai tried. The number of releases for the Wonderswan dropped drastically in 2001, although, to be fair, many of the lingering releases were ports of some excellent RPGs.

In 2002, Bandai released an updated model called the Wonderswan Crystal. While it wasn’t any sort of hardware enhancement, it did feature a much clearer screen. That wasn’t enough to improve the system’s flagging sales, nor did it spur any additional development. In 2003, the system was discontinued, and Bandai backed out of the handheld business forever. Estimates for total sales along the whole Wonderswan line is 3.5 million units, which isn’t bad for a Japan-only system. Even with its limited success, it was destined to become just another gravestone left in the wake of Nintendo’s handheld dominance.

There are rumors that Bandai was in talks with Mattel to bring the Wonderswan stateside, but, evidently, that never went anywhere. Instead, the system was left locked in its home country.

If you’re interested in picking one up for yourself, realize that a large portion of the library is RPGs and anime games that require a certain amount of Japanese literacy. An original Wonderswan or Wonderswan Color is pretty common and cheaply had, but a Crystal will put you out of pocket. The price of most of the games aren’t anything spectacularly expensive, and Japanese gamers had a habit of keeping their boxes for everything, so it’s easy to get complete packages.

Overall, the Wonderswan was a solid system. Out of all competitors for Nintendo’s throne, it’s probably the most well-rounded attempt, having a decent library and hardware that eschewed all the powerful bells and whistles to provide something reliable and affordable. It saddens me that so many promising competitors, like the Wonderswan or Neo-Geo Pocket, were absolutely trounced by Nintendo. We never saw the diversity that was found in the console market, and the Wonderswan is just a sad reminder that even the best attempts aren’t always enough to topple a giant.