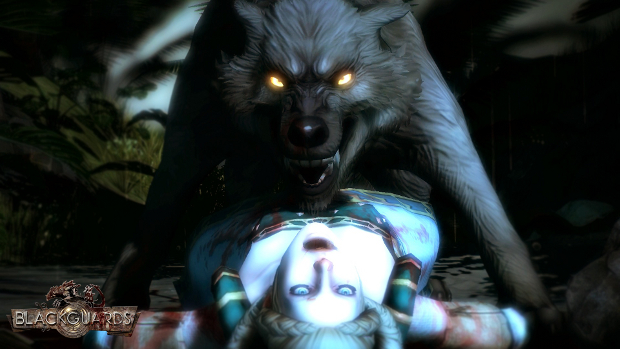 From adventure to turn-based RPG

Straying from its more worn path, Daedalic Entertainment is branching out from adventure games to tackle the world of turn-based RPGs in Blackguards. Set in the land of Aventuria, the setting of The Dark Eye: Chains of Satinav and the recently announced Memoria, Blackguards follows the adventures of a less-than-heroic band of unpleasant misfits, including a lecherous wizard and a drug-addicted half-elf. This group of unscrupulous rogues are led by a convicted murderer, the title’s protagonist, who can either be a wizard, warrior, or a hunter.

Blackguards boasts upwards of 170 battle maps, over 40 hours of gameplay, and, unsurprisingly for a studio known for its adventure games, a focus on storytelling. On the topic of said story, Daedalic is being a tad vague, likely to save up for its presentation at GDC.

Unlikely as it may sound, this party of ne’er-do-wells are actually trying to save the world from a “dark menace,” apparently. Well, it’s always a lark to play as a villainous character, even if they are trying to stop an even more foul evil. Blackguards is set to launch in Q3 of this year.