Before we get another Smackdown vs Raw, THQ is going to be delivering an over-the-top, arcade-style wrestling game in the way of WWE All Stars. This WWE game is about getting into the action fast with twitch-like controls and overly stylized moves.

You’ll likely recognize a lot of the moves, but expect a very cartoon-y result. Imagine The Big Show power bombing someone which then results in the opponent getting launched 12 feet into the air from the impact. You can even juggle others like in traditional fighting games (e.g., Street Fighter). 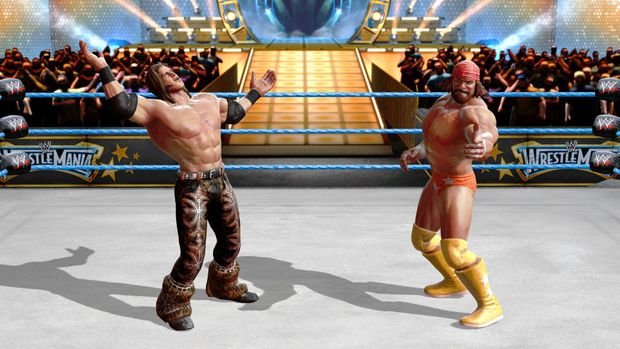 There are around 31 wrestlers that will be in WWE All Stars, and so far, THQ has shown off Ricky Steamboat, Bret Hart, The Rock, Triple H, John Cena, Andre the Giant, The Big Show, Kofi Kingston, Rey Mysterio, John Morrison, Sheamus and Randy “The Macho Man” Savage. Two additional characters — Million-Dollar Man and Ted Dibiase Jr. — will be available exclusively through GameStop pre-orders.

All of the fighters are split up into four categories: acrobat, big man, brawler and grappler. Don’t expect the wrestlers to have the same moves just because they’re in the same category, either. Someone like Shamus will have a completely different play style in comparison to someone like Bret Hart.

Only one game mode was shown off — a simple one-vs-one gametype. There will be up to four-player support that we’ll hear more about at a later date. We were at least told to expect a wrestler creator system, downloadable content and multiple modes including one called “Fantasy Warfare” where players pick between WWE Legends or WWE Superstars to see who the greatest (virtual) fighter of all time is. 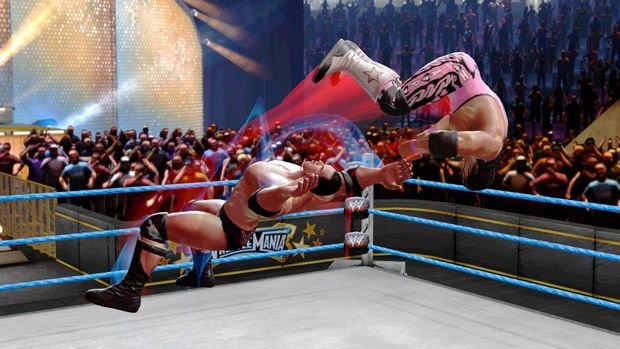 Controls were pretty simple from what I tried out on the Xbox 360. Y is assigned to your strong strike, X is for a quick strike, B is a strong grapple and A is for a quick grapple. Combos can be performed and a different move will happen depending on which direction the joystick is pushed with the button presses.

Players have an energy meter that allows them to use four different signature moves for each wrestler (The Rock’s “Rock Bottom,” for example.) These meters fill up faster the more a player uses different techniques. Performing these signature moves is done with a combo of either the X + A or Y + B buttons. These special moves also cause all of the action to go into very cheesy slow-motion.

Along with the energy meter is the Finishing Meter which is activated by pressing the left and right bumper together at the same time. A player can activate the Finishing Meter once it’s filled up and if they connect, it’s over; the opponent is knocked out.

On the defense side, players will be able to counter grapples/reversals with the left bumper and block/counter strikes with the right trigger. It’s kind of a guessing game as you’re not sure if the player is going for a strike or attempting to grapple. Everything can be reversed, so it’s up to you to be quick enough to prevent an attack. 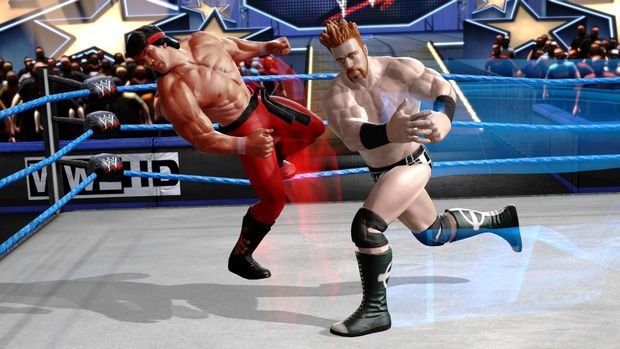 You’ll of course be able to do things like climbing the turnbuckle, whipping players into the ropes — you can even use objects like steal chairs, although you have a limit to how many times you can use a weapon before getting disqualified.

The other meter you’ll be worrying about is your health meter, naturally. You’re in trouble when it’s flashing red and it’ll be harder to get out of pins. One thing I liked about All Stars is that even a pinned player will have a second chance as a meter pop-ups for both players. The player that’s pinning the opponent will need to try and fill the meter while the pinned player will be trying to increase the capacity of the meter, making it harder to get filled up.

Overall, I felt that the controls were very easy to pick up and play. I managed to win a couple of matches; granted, I used Andre The Giant against an AI-controlled Rey Mysterio. It’ll be interesting to see if players use the Mad Catz Fight Sticks or Fight Pad for All Stars. I think the regular controller is a better fit, but I can see why THQ would want pro controllers.

The one thing I couldn’t stomach with All Stars is the over-the-top look for the wrestlers. I mean, I get why they did it, I just think caricature designs of ANYTHING are always gross looking. 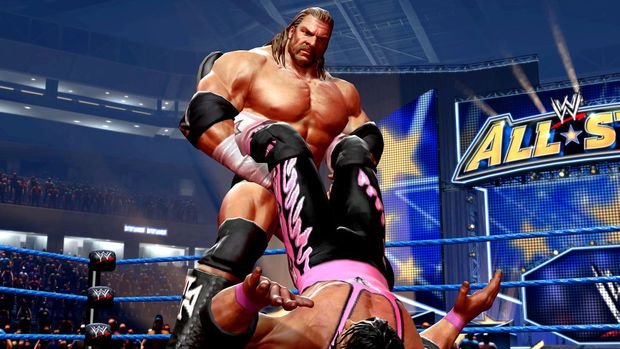 After the WWE All Stars presentation, THQ had The Big Show, Ricky Steamboat, Kofi and Shamus talk about the game. It was kind of cool hearing how the current wrestlers are honored they are able to go up against old-school wrestlers like Bret Hart, Macho Man and more. It’s just as much of a dream match for the wrestlers as it will be for wrestling fans that get WWE All Stars.

*Images in the gallery are a mix of PS3/Xbox 360 and Wii screens. See if you can tell the difference!

Filed under... #Destructoid on assignment#THQ#WWE