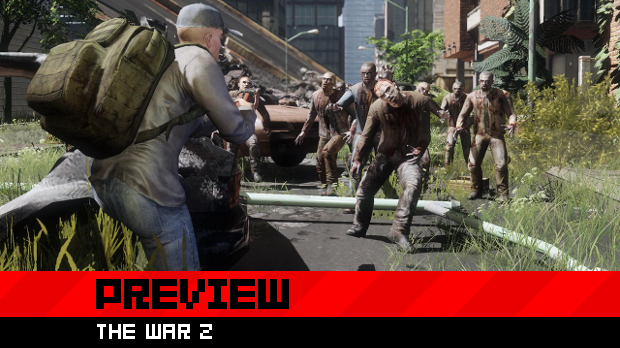 I guess we’ll have to blame Max Brooks for the whole “Z” minimalism in which the letter stands in for or otherwise denotes “zombie.” It does make parsing between the widely popular Arma 2 mod, Day Z, and the newly upcoming MMO, The War Z, a bit of a headache. The latter began development first, while the release of the former (and its subsequent success) has sped up development on The War Z, which is now aiming for a late October release date.

Sitting down and playing The War Z helped clear up some of the conflation. It also got me rather excited for the upcoming survivalist zombie MMO, which is something to be said for a game with zombies in it amidst our current deluge of the undead.

Anticipatory parties can also thank Day Z for one other fundamental design to The War Z’s besieged world: the completely open map. Initial design was to have sections of the map blocked off, in the oft used style of open world games, until players completed certain missions. Community response to Day Z showed fans didn’t want or need that sort of funneling and overbearing direction. Accordingly, War Z begins entirely open, casting you in this immense, dangerous landscape with little sense of direction and vast expanses to explore.

People seem to like big maps, citing the square footage of their favorite games as a point of pride. Here’s a point for you. The War Z’s launch map, called Colorado, is about 70 square miles of blended urban and rural environment. The map that’s currently in development, which will be pulling influence from California (specifically, LA and San Francisco), is almost twice as big. So I am not overselling when I say there is a vast expanse to be explored. Vehicles are still being worked on and will eventually be available to abet transport by the end of the year as well, though I’m not sure what sort of limitations will be put in place in terms of availability, gas, and so on.

Content like new maps and vehicles will be available free of charge to those who purchase the game (at around $30), while micro transactions will be present, but not overwhelming or game breaking. Everything is meant to be under a dollar, every item available can be found in game, some of the options are purely cosmetic (like hats), and higher tier weaponry like explosives or good guns won’t be sold.

There are five survivor slots available to you in The War Z, as well as eight different characters, some of which need to be unlocked with in-game experience points, and some that allow for mild aesthetic customization. With these survivors comes the decision to play in normal or hardcore mode. In the latter, a death is a death. You lose your loot, of course, but also that character and any progression they’ve made as far as stats go. In normal mode, you will lose your loot (unless maybe you’re playing with a kind friend who picks it up for you from your sorry corpse) and be locked out of using that character for a day or two.

When you’re thrown into the game with a new character, you have little outside of a flashlight, which doubles as a last ditch melee weapon, so the impetus is to scavenge and get a lay of the land. Probably to pray, too. Zombies are of the shambling ilk and require a headshot — just one, thankfully — or blunt force trauma to the head to down. They can’t climb ladders or open doors, either. Even standing on a car can provide relative safety, though if you’ve drawn enough zombies to surround you, you’ll have put yourself in an interesting predicament. If you have enough stamina you can out run them, too.

Zombies have a natural knack for being where you least expect them and this is no less true in War Z. They’re treated as an environmental factor, less dangerous than your fellow, likely gun toting player, yet they can creep up on you. Quite a few times I found myself wandering into seemingly safe areas only to have one end up right behind me, and then another, and another. It’s surprisingly easy to get overrun and you probably won’t have a lot of bullets to mow them down endlessly, especially since the hullabaloo is only bound to bring more and more your way. I anticipate the quick switch between third and first person views will be helpful as you ebb and flow between killing the biggest threats and watching your back for unsolicited surprised.

If unguided and aimless exploration wears thin, there are also interesting social and communal elements at play. You can freely leave notes for other players, for example, either to help or hinder them. I expect much of the latter. Additionally, there are various zombie-free zones where players can meet up, trade items, takes on tasks, etc. There are no NPCs, but players can use the bulletin board to make quests. The first type of quest lets you alter specifics of sort of generalized tasks; “kill this player for me,” or “accompany me to this point.” An in-game system will be able to tell if you’ve completed the mission, at which point the game will offer you a reward in addition to whatever the player offered.

Additionally, there is a more open ended mission board that’s entirely trust dependent, as task masters can ask for whatever they like and are not bound to give you your reward. I was told of one instance of a mission posted that was oddly specific in the gear the accepting player must have. A player took the mission, met the user who had posted it and was promptly killed for his gear. Even in these zombie free zones, players can still kill each other. Cool aside: a player is said to have killed another wandering the supposed safe zone from three miles away with a sniper rifle.

Players can also create their own strongholds in small instanced worlds. Small being something like over two square miles. There are various tools at play for people to build their own little societies. One player made a farmhouse for his Farmville-obsessed wife with rows and rows of little blocks that, when watered, sprout vegetables, which he would then go into the main world and barter with. Another made a gladiatorial arena around a set spawn point of one of these smaller maps and led zombies in, allowing those who wished to spectate access for a small donation, while those who wished to participate would be allowed in at no cost. Anyone who wants the entire 70 square mile expanse as their own personal stomping ground can rent a server, which can be done through the embedded in-game interface.

There is also a day and night cycle lasting about four to five in game hours and nighttime is terrifyingly pitch black, which was amazing. Without light, you can barely see the shadow of a zombie lurching toward you until they’re just a few feet away.

While I’m not sure I have it in me to go it alone, I’m hoping to rope some people into playing War Z with me, as we live out our own survival scenario and see how well we do. Probably terribly, but them’s the breaks when society crumbles and every person out and about is probably a jerk who wants to kill you and take your fancy hat.