One of the big game reveals of last night’s Ubisoft event was Zeit2 (pronounced Zeit-squared). Like the publishers other hot hybrid title Outland, Zeit2 works to combine influences from a variety of different games and fuse them into one cohesive package. The game looks a bit like FlOw, plays like Gradius, and thinks like Braid.

As you can tell by the look on the guys face in the video below, the game is quite thought provoking. Hit the jump for my full impressions.

Zeit2 is a time distortion shmup, not unlike Retro/Grade, but with less guitars, and more variations on the time travel theme. From start to finish, you’ll need to regularly reverse time and play through a segment again in a new way. It may sound strange, but after a few tries, it becomes second nature.

As you play, you build up fractions of seconds that you can reverse time. Unlike in Braid, turning back the clock doesn’t save you from taking damage. Instead, it allows you to dish out more damage to your many enemies. In fact, some enemies can’t be hurt unless you shoot at them, reverse time, and then live through the moment again, as you watch your future self take out the enemies for you. 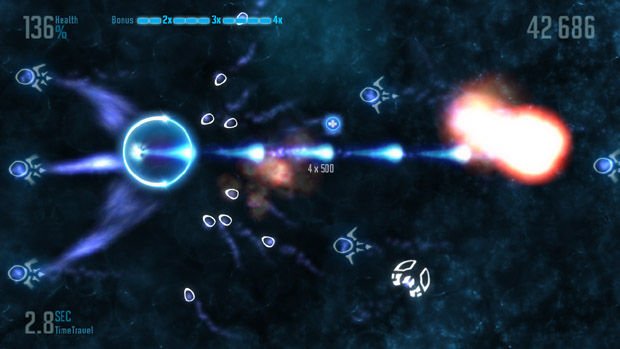 Remember those scenes in Bill and Ted’s Excellent Adventure where Ted would plan to later go back in time and leave a helpful item around so that he and Bill could use it in the present? Zeit2 feels like that, but in shmup form. You’re always planning to go into the past to help your future self out with a new problem. I know it may sound complicated, but it actually comes together quite naturally, like any good shmup should.

There’s more to the time travel fun than that. When you reverse time and move forward again, you see your old self in the form of a shadow. You can actually shoot your former self (which takes the form of a shadow. “Shadow of your former self. Ha Ha.) before he goes back in time to become, well, you. Like most time travel movies, this doesn’t actually make any sense, but it’s awesome. Killing your shadow self doesn’t harm you, but instead causes a huge explosion that sends bullets out in every direction. This is just another way the game encourages you to experiment with the time reversal mechanic. 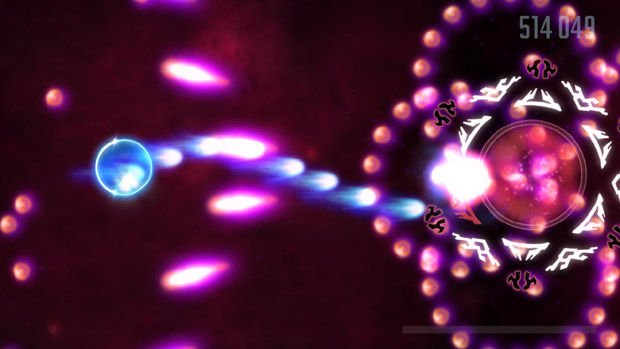 That said, this is a shmup. People are going to get good at it. For them, there is the option to fast forward time as well. This makes the game much harder, but the reward comes from a score multi-plier that activates for every enemy you hit while in fast forward. It’s also great for speed-runs. 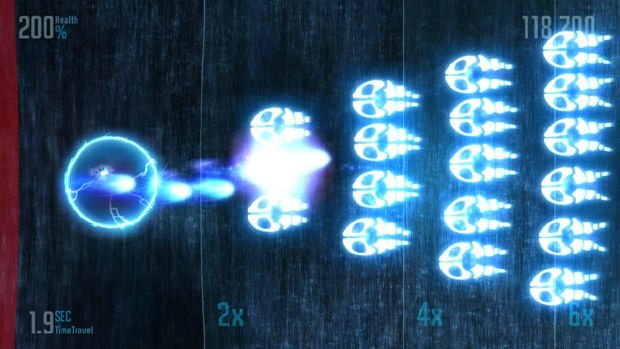 There’s more to the game than just time travel. You acquire weapons from bosses. The game has multiple modes to explore (but no co-op. Sorry, LifeForce fans). There’s even rumor that the famous Konami code may activate some new features. The whole package adds up to something accessible enough from 2D shmup fans to easily jump into, but innovative enough to give them reason to take notice.