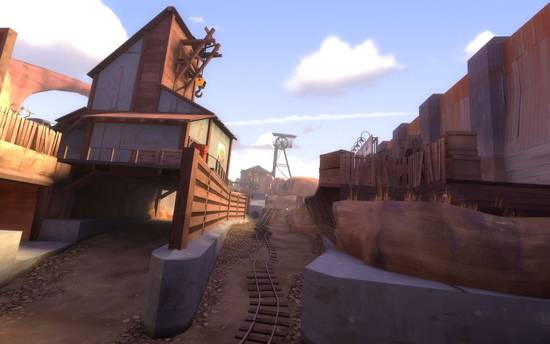 Valve threw a nice little get together at Blondie’s Bar in San Francisco last night. In the midst of free flowing alcohol and pizza that was good only if you were drunk, dozens of computers were lined up with Team Fortress 2 ready to go. Valve was there to preview the new map Goldrush, the new gametype called Payload and the new weapons for the Medic class.

The Medic is the first class to receive these new weapons upgrade with the rest of the classes getting new weapons throughout this year. For all the new info on the new maps and weapons, hit the jump for all the details on the new additions to Team Fortress 2. 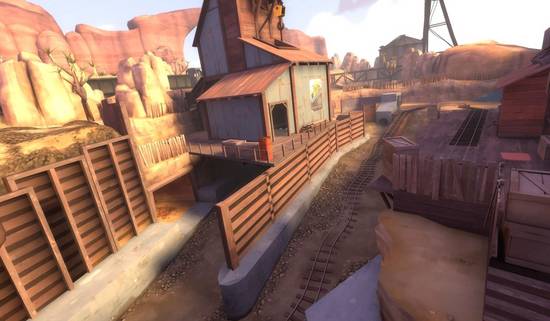 First, lets talk about the new map Goldrush. Goldrush is set up for the new Payload gametype. There are mine car tracks all around the map and there are multiple ways to get through each of the choke points of the level.

In the Payload gametype, teams are split off into defensive and offensive sides. The offensive side has a giant bomb that they need to protect and help move along to three different points on the map. Once one point is captured, a new round is started and the offensive side does the same thing again except the checkpoint is further on in the map than before.

The bomb cart will only move when the offensive team is standing next to the bomb cart. The more people that are near the cart, the faster it will move. If the bomb cart is left alone for more than 30 seconds though, it will slowly start to move backwards until someone gets near it again. The Payload will also heal any of the characters near it as the Payload is advanced forward. The Payload also acts like a giant shield and forces the defensive team to get in real close.

I really found myself enjoying this gametype. It required for some heavy teamwork and coordination on both teams. The first time through, the team I was on was easily able to get the Payload to all three checkpoints on the map. Later on in the night when I played again, my team wasn’t so fortunate. We managed to get to the first checkpoint easily enough. It was the second checkpoint we hit that created a giant stalemate. My team continually got stuck inside this one room with the Payload and couldn’t get past the defenses of the other team. An Engineer had set up a turret just out of site that kept tearing us apart. Plus a Demoman and Soldier were endlessly shooting into the room that the cart was stuck at adding more chaos to the scene. 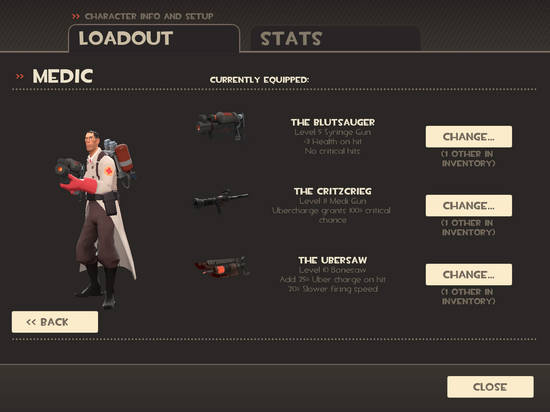 The Medic class weapons were shown off during this preview as well. The Medic is the first class that will be getting this type of upgrade and expect all of the other classes to get similar upgrades throughout the year.

Gaining two thirds of the achievements will gain players the new Critzcrieg gun. This new Medigun will give other players a 100 percent chance that they will fire critical shots.

Finally, gaining all 36 achievements will get players the Ubersaw. The Ubersaw will take health away from players that are hit with it and convert it into ubercharge. Getting four hits with the Ubercharge will fully charge whichever Medigun the Medic has equipped.

Players can pick whichever weapons they want in their inventory when they pick the Medic before a match starts off or when you respawn back at the base. Valve is all about making sure everything stays balanced so these new weapons and the new weapons to come for the other classes are all still going to be pretty balanced.

No exact time frame was given for the release of all this new content, but we should hopefully see these released in the next couple of weeks for the PC. Valve is working on getting this stuff out for the console versions as well, but that’s probably isn’t going to happen anytime soon.