Have you heard of “trolling”? I guess a lot of people are into it; you know, going to a Super Mario Bros. tribute site and starting a topic called “Why do you guys play such sh*tty games?”, or a Tekken fan site and saying “Tekken‘s not really a fighting game, it’s just fast-paced rock paper scissors”. That sort of thing has become normal by Internet standards. I guess it’s funny?

Regardless of how funny that sort of douche-y garbage is, it seems that it’s here to stay. Going to someone else’s virtual house and giving them some unrequested opposition is something that people crave. Mindjack works to meet that craving, in videogame form.

At first glace, I wasn’t sold on the premise, but after a few minutes in, I began to understand understand how being a jerk can be fun under the right set of circumstances.

Hit the jump for my full impressions of Mindjack.

[Warning: We tried something new when we shot these videos, and as a result, the ended up in a format that we couldn’t edit or otherwise manipulated. I’m letting you decide if you want to watch them or not. Just know that they are not up to my standards.]

At its core, Mindjack is just another third-person shooter. It’s got the standard stuff that most of us have come to expect from the genre: a cover system, a handsome male lead, a female love interest with butt-flattering pants, a group of bad guys that have mysterious intentions, an 8- to 12-hour-long campaign mode, that sort of stuff. The hook here is that you don’t have to settle for just playing as one character. At any given time, you can take control of one of the game’s many NPCs through a very Ghost in the Shell-style “jack-in” system. By pressing the analog sticks in, you can leave your body and float through the air as a cloud of data (red data if you’re on the “bad guys'” team, blue data if you’re on the protagonist’s team. You can do this both in your campaign mode, and in other people’s games as well.

That’s where the trolling comes in. There is something undeniably dick-ish about jumping into someone else’s story and killing them off before they can get through a given level. If you’re the type of bastard that’s always identified more with the bad guys than the good guys, this game lets you fulfill your fantasy of killing the hero in his own story. 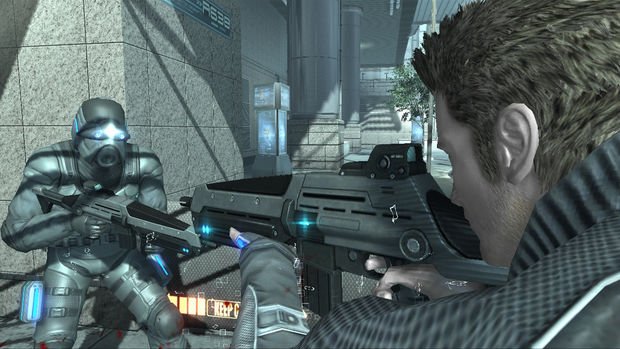 Anyone familiar the Manga and/or Anime of Shirow Masamune will immediately see that the similarities between the mind-jacking in Mindjack and mind-hacking of Ghost in the Shell. The similarities between the two works don’t stop there. At its best, Mindjack looks a lot like a Shirow Manga come to life. The game defies the current trend amongst Japanese game developers, who seem more and more inclined towards mimicry of Western-style art direction, and instead goes for a more “hemisphere neutral” look. Unlike Gears of War, which looks definitely Western, or Final Fantasy, which looks very Japanese, Mindjack could pass for either Eastern or Western.

The game’s human characters appear realistic enough, which works well to ground the game on a solid, suspension-of-disbelief-inducing foundation. Sadly, this “safety first” philosophy towards graphic design comes packed with a touch of tedium. There is a whole lot of gray and light blue in this game, more than most people probably want. Still, this is just the foundation we’re talking about. I’m been promised that the game features a variety of environments and big, beautiful bosses. I didn’t get to see any of that in my limited time with the game. Instead, I was treated to a couple of battles against the game’s “regular” enemies, including standard soldiers, giant cyborg gorillas, little robot monkeys with machine-gun wings, flying drones, six-legged walking tanks, and Gatling gun-armed droids.

It was fun to battle this assorted bunch of foes, but it was even more fun to take them over. Being able to posses a 12-foot gorilla and crush my enemies with my bare gorilla hands made for a great break from the “cover, pop-up, shoot, repeat” gameplay that marked the majority of my experience with Mindjack (and most modern third-person shooters).

As expected, the emotional satisfaction isn’t the only reward for jumping into someone else’s game and ruining their day. You gain experience points in multiplayer modes that can be applied to skills and stats to your character in campaign mode. One such skill was a Vanquish-esque power-slide that was a lot of fun to pull off. It wasn’t quite as awesome as in Vanquish, but maybe it will get there after some leveling up. 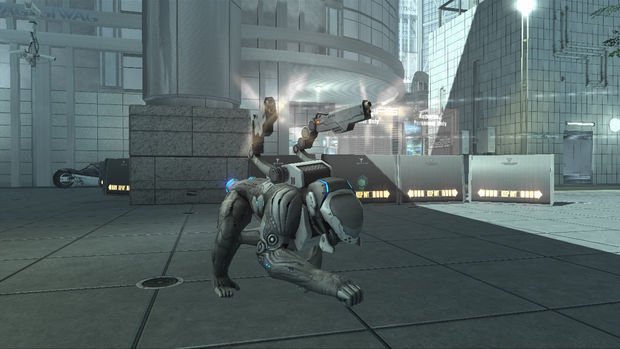 I assume there will be some level caps in place to keep players from grinding their characters into super hero-hood and then blasting through the game’s story without a challenge, though I (stupidly) forgot to ask Square Enix about this when I had the chance. Balance could definitely be an issue with a game like Mindjack. Still, even if the game ends up being unfair at times, it’s undeniably original.

It was definitely too early to say for sure how well Mindjack will turn out. It’s the kind of game that can pull you in with its new ideas, but its lasting appeal will depend on how well those ideas are executed in the long run. One thing I am sure of is that fans of Masamune Shirow and progressive third-person shooters should definitely give the game a shot when the inevitable demo is released early next year.