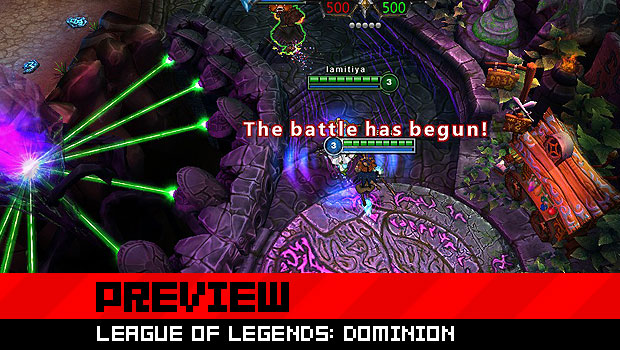 This week, Riot Games announced that it would be starting a limited-run beta session for the upcoming League of Legends mode, Dominion, during off-peak gameplay hours. I’ve gotten to experience this new mode during one of these sessions, and man was it fresh.

For those of you who may not be familiar with Dominion, it’s a new mode and map combo that seeks to drastically change the way this multiplayer online battle arena game plays. To those unfamiliar, this might not seem like much. I mean, in other genres, new modes and maps come out all the time, right? Well, think of LoL like it’s baseball for a moment. Dominion does to this game what changing the diamond field to a circle would do for baseball.

And not only does it shake things up, it seems (so far) to do so really well. Initially full of confusion at the unfamiliar yet beautifully detailed surroundings, it quickly became clear that this new mode was set to do away with a lot of the common staples of the genre to make for a more action-filled, fast-paced experience.

I must take some time to single out the amazing audio design that has been done for Dominion. The round starts with a triumphant sound playing that really gets you pumped and ready to go when the setup phase concludes. The music will shift and change depending on conditions of the match, such as which team is winning and by how much.

It’s music that’s unlike the more paced rhythmic drum beats and clicks of the normal gametype, instead favoring a much faster tempo, with violins playing faster and faster, drums beating with a primal fury, and the choir chanting on and on, urging your team back from the edge of defeat, or egging you to stay your place when your team has the upper hand.

And it clings really well to the faster gameplay. The mode starts off with a deceptively long startup time of about one and a half minutes. In exchange, you always start off at level three — and with a pile of gold in your wallet — allowing you to begin with a good bit of equipment. This is great, considering the first thing you’ll notice when the magical barrier finally drops is the lack of the three traditional lanes and minions trying to walk from one base to another.

Instead, there is the outer ring, and it is always visible. There are five giant nodes situated along this perimeter, arranged like a star with the fifth one being at the top most point of the ring. There are minions, but they only walk from captured nodes to the nodes adjacent to the originating node. For the most part, there is no laning phase because of this, and there is little in the way of farming.

Minions do give out more gold than in the normal mode here, but there are a lot less of them, and they also have a finite lifetime. Instead, more emphasis is placed on capturing the nodes, and defending them from the enemy champions. Captured nodes will cause damage to the enemy nexus, and an award of gold and experience is given to the champions involved in capturing it. The same is also true of champions that interrupt enemies from capturing an owned node. This also devalues killing enemy champions unless it serves either capturing or defending a node, as the gold obtained that way is only 100, as opposed to 300 in the normal mode.

Most of the action so far seems to take place on the outer ring, but that does not mean you will be spending all of your time there, nor that it would be wise to keep walking along the always visible path. Inside the circle are a series of paths you can take to shortcut your way around the map. This area is also completely shrouded by the fog of war, save for one spot in the center where crystals that can be captured for a buff for a member of each team spawns. In here is also something new to League of Legends, mainly pickup items. There are two, one is a movement buff, and the other is a health pack. There are no neutral monsters at all on this map, and strategic maneuvering through buffs can help your team more efficiently defend or assault nodes.

Dominion seems mostly balanced from what I have played so far, though it appears that some work still needs to be done with it. So far, I’ve only played with three champions: Irelia, Riven, and Lux. I’ve had success with all three; it seems that most champions are still very much viable here, although you may have to get used to building your character up with different items. Aside from just the faster startup, and the lack of a laning phase, there are also new items specific for this mode, and some of the old items are unusable.

It also seems like the importance of your team’s composition might have been toned down a notch, making room for more people to play who they want to. I think part of this lies in the drastically reduced respawn timers, maxing out at 20 seconds at level 18. It does seem to me though that characters that are fast, and stack movement speed like Master Yi, Irelia, and Teemo have a bit too favorable of an advantage, being able to maximize the use of the movement buffs to sneak their way to nodes on the complete opposite side of the circle.

Dominion seems to be shaping up wonderfully so far. It’s certainly the most impressive endeavor I think I’ve seen from Riot Games, or really, just any group of people working on a MOBA game at all. It only needs a little more work and balancing, but this could truly be a viable next step for the genre — one that I think really opens up the idea that it can still evolve into something versatile.

If you’re interested in checking this out, it seems like the mode has been available around 5:00-8:00pm Eastern during the week, and 1:30-4:30PM Eastern on weekends. You can sign up for League of Legends here if you don’t have an account already.

Filed under... #Beta#Free-to-play#Gallery#League of Legends