Spray some ink, turn into a squid, the usual

Two days ago, if you had told me that Nintendo was working on a competitive multiplayer third-person shooter, I would have thought you were crazy. Imagining Nintendo venturing into the territory of blood-spattered 360 no-scope headshots just does not quite feel right.

Of course, Nintendo can take a gameplay mechanic that is normally reserved for more “mature” games, open it up to everybody, and inject its own ideas to create something that is wholly its own thing. That thing is Splatoon, and we got some hands-on time with it here at E3. 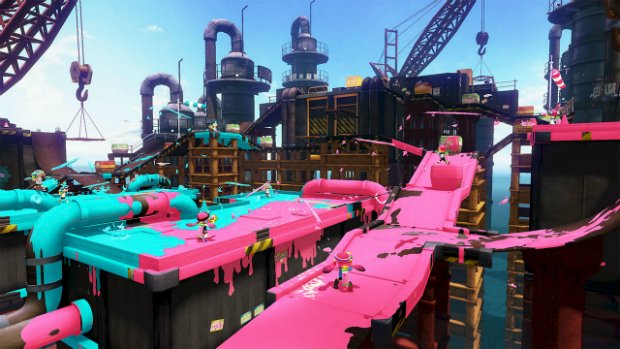 Splatoon pits two teams of four players against one another, but rather than a competition for the most kills, the goal is to use a paint gun (think F.L.U.D.D. from Super Mario Sunshine) to cover the arena with as much of a particular color as possible. Naturally, the other team is trying to get its color on the floor and walls as well.

From that simple setup, a few additions make things interesting. At will, combatants can morph from kid to squid, which removes the ability to apply color, but allows for paint regeneration and different movement options. When traversing through an area with one’s own team’s color, movement is faster, while moving through an enemy color slows a player down a considerable amount. If a player shoots an enemy team member enough, the target will explode, dropping a splat of the attacker’s color over a good area.

What results is a game that has no explicit class system, but allows players to more organically take on different roles. In order for respawning team members to get back into the fight more quickly, an unbroken chain of the team’s color helps, so one player may choose to stay back and defend previously claimed territory. Conversely, those on offense may find it useful to sneak by and cut off the enemy team’s reinforcements. 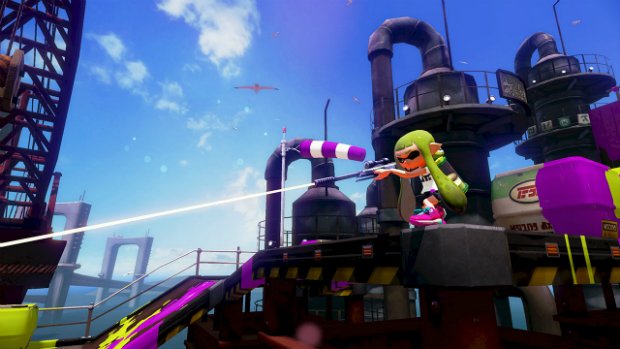 The GamePad is used both for aiming control and as a minimap of the battlefield. Tapping on team member here will allow players to tactically jump to one another. It takes a bit of time to execute, so it probably cannot be used to escape a sticky situation, but it beats trudging through opposing color when the action is further ahead.

I did have some trouble getting the hang of the controls. Rather than a straight dual-stick setup, aiming is done via the tilt sensor in the GamePad. The right stick does have camera control, but I found myself fighting with it to try to look where I wanted. Additionally, my years of console shooter conditioning hindered me every time I expected to jump with the bottom face button, only to have to take a few seconds to remember it is on top. I asked if the controls would be customizable, and the Nintendo representative showing Splatoon said that the E3 build was set, but that it is still in development and custom controls will probably make it in the final version.

As a result of the tricky controls (and this is my excuse), our team lost pretty badly. One of the other tactical features touted in the promotional material is the use of upgraded weapons and items depending on paint coverage, but we did poorly enough that I did not get to see any of those. Still, Splatoon was a lot of fun, and surprisingly deep despite its simple premise. This is definitely one to watch for any who long for a good competitive shooter on the Wii U.