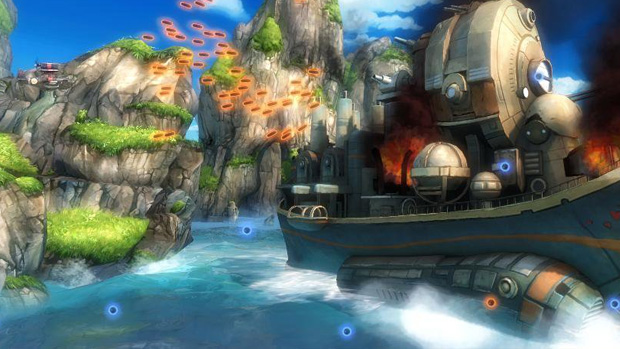 Grasshopper Manufacture has been a busy little studio of late. Hot off the heels of Shadows of the Damned, it has Lollipop Chainsaw in the works for Warner Brothers, and has teamed up with Digital Reality on not one, but two downloadable titles — Black Knight Sword and Sine Mora.

Sine Mora is a game about time. Each level must be completed before a timer counts to zero, otherwise you lose. There’s no health meter or one-hit kills, either. Taking damage cuts precious seconds away from the clock, while destroying enemies adds them. This balance of time is what Sine Mora is all about.

Despite this quirk, there’s a lot of tradition to be found in the game. The scrolling action and focus on throwing many, many bullets at the player betrays Sine Mora‘s strong arcade roots. In addition to regular fire, players have access to a powerful alt-weapon. There will be six alt-weapons in the game, and the one I got to try was a huge beam of energy that decimated enemies in moments. In addition, there is also an option to temporarily slow down time, a blessing when facing the game’s huge, multi-part bosses.

No shooter is complete without powerups, and Sine Mora has a modest offering of icons to pick up. Most of them replenish ammo and slowdown, but one can also pick up red orbs that make the regular attacks more powerful by increasing bullet spread. Taking a hit causes these orbs to fly out of the player and require recollecting, though to panic and go after them without thinking often leads to a quick death, as I soon learned.

Sine Mora is on track to be a fantastically fun downloadable shooter. The graphics are terrific, there’s a silly story at play and the bullet-Hell action is fast-paced and surprisingly varied. In my one demo session, I fought giant skytanks, went underwater, and shot at big worms in a subterranean cave. With three planes to choose and plenty of levels with shifting scenery, I can’t wait to try out the full game.

It’s due out within the first two months of 2012. Definitely don’t let yourself forget about it!