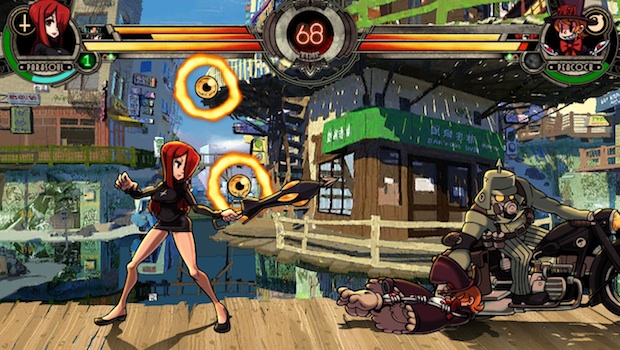 If you are a fan of fighting games, odds are that Skullgirls is on your radar. Developed by Reverge Labs, this upcoming game features gorgeous 2D graphics and a fighting game engine developed by tournament fighter Mike “Mike Z” Zaimont. Amongst my coverage at EVO this year, I had a chance to sit down with Mike Z and check out the recently announced character “Parasoul” from one fighting game fan to another.

Parasoul is the princess of the Canopy Kingdom and was given a special umbrella that allows her to throw balls of napalm that are instrumental to her play style. She also happens to be in charge of the kingdom’s military and that command is apparent in her moveset.

One of the first things I noticed about Parasoul is that her umbrella allows for a pretty large range on her weak attacks, allowing for decent poking game to start combos from a distance. While her umbrella allows for ranged normals, her long legs give her the ability to stomp opponents in the air, similar to Seth from Super Street Fighter IV. Unlike other characters in the game, her throws keep characters close to her, which allow for combo opportunities off of them. 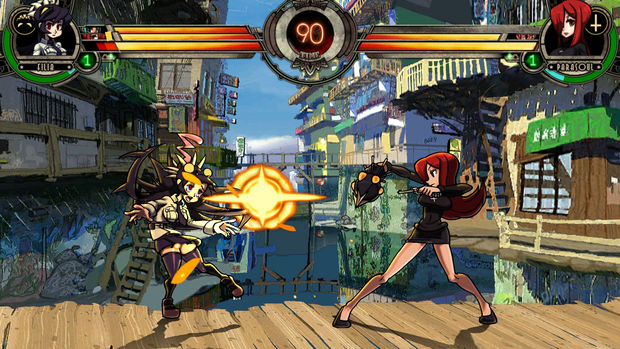 Her special moves can be divided into two types. The first involves the use of her umbrella, which releases napalm grenades that travel in an arc dictated by how long you hold the button down. If you played as Cable from Marvel vs. Capcom 2, you should be familiar with this system. What I found interesting is that the Skullgirls team used EVO as a play-test and actually changed how these grenades worked based on what they saw at the convention. Therefore, the way to set off these grenades is still under development, but it’s impressive that they are relying on actual gamer play-testing to decide on the final move set.

The second type of special moves relies on the fact that Parasoul is in command of the kingdom’s military. I found these moves to be the most interesting in that each different button press calls out a soldier on the screen to serve a certain function. One soldier serves the purpose of blocking projectiles, one serves as a grab that takes your opponent to the other side of the screen, and the third is basically a soldier that acts as a Roman Cancel from Guilty Gear X, allowing to cancel the recovery of any move upon input. Mike Z was able to show me how this specific move allows for very interesting combo opportunities. 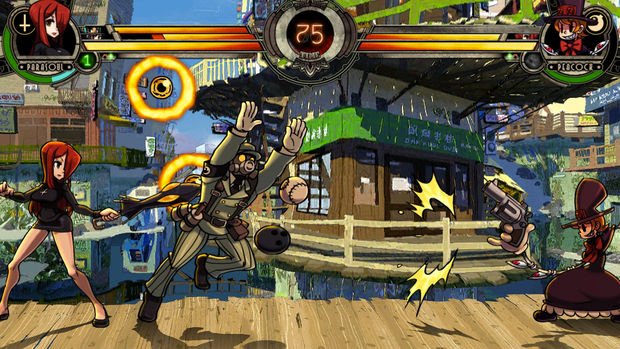 I was able to check out two of her supers, one of which is a sniper shot that hits wherever the opponent is. This super leaves the opponent in a crumple stun that can be comboed off of, but if missed, has a long cooldown that leaves you wide open to attack. The second, her level 3, is reminiscent of B. B. Hood’s Super in Marvel vs. Capcom 2 in that her soldiers come out with their guns to pump lead into your enemy.

As with other level 3s in the game, it has invincibility on startup and isn’t prone to damage scaling, so it’s an ideal way to end a combo for maximum damage.

My time with Parasoul was interesting in that I could see that she had a decent ranged game with the napalm grenades, but also lots of ways to be technical with cancels and stomping in the air. I came away impressed with the fact that the Skullgirls team is definitely drawing on what they enjoy from many other fighting games and incorporating them into very unique characters.

If you are a fan of fighting games, I would definitely pay attention to this game because it’s shaping up to be a great one, due to come out sometime later this year.