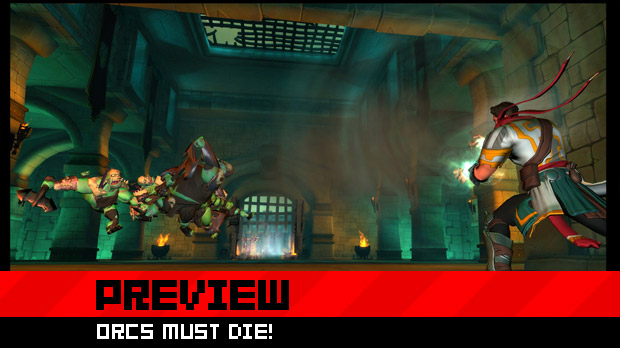 Earlier in the year, we got some PC coverage from Colette Bennett. From my Xbox 360 playtime with three full levels at various points in the game and a great variety of traps and spells, I can confirm that Orcs Must Die! is shaping up to be an awesome and frantic experience that will appeal to a large audience of gamers for both the tower defense and adrenaline-filled action genres. 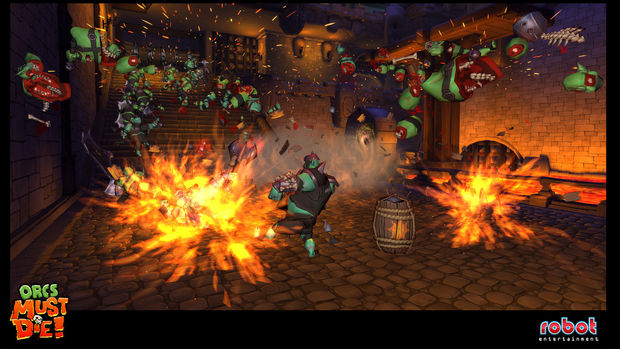 Let me level with you. Though Robot Entertainment is partially made up of the team who used to be Ensemble Studios — the company responsible for PC strategy games such as Age of Mythology, Halo Wars and Age of Empires Online — I’ve never personally had experience with these titles; I have never been able to get into strategy games as a genre. I do generally like tower defense games, but in my mind these equate to a lighter form of strategy game, such as Locke’s Quest and Plants vs. Zombies.

Going into Orcs Must Die!, I loaded up the second level of the game and was immediately faced with an inventory filled with traps, spells and weapons. It was a little overwhelming at first, as I had no idea where to begin and didn’t want to look like an idiot in front of members of the team who created the game.

Fortunately, some basic mechanics were explained to me as I glanced at items in my possible inventory, and the on-screen prompts confirmed what I was being told. In every level, you are given a certain amount of slots to choose the kinds of traps, spells and weapons you will carry with you in battle. In my first load-out, for example, I chose a sword to go along with my default bow and arrow weapon, and a few different traps such as tar pits, arrow-shooting walls, and an always comforting and familiar game trope: the exploding barrel. 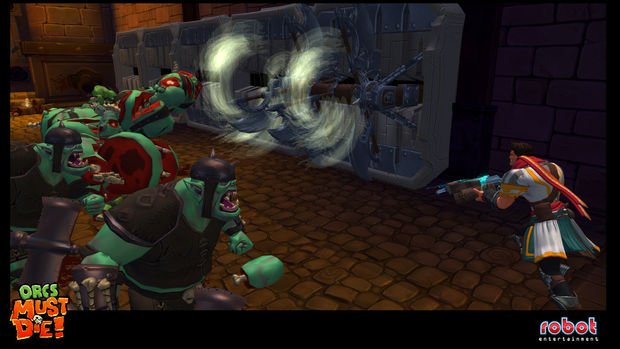 Once my load-out was chosen, I had as much time as I needed to set my traps and plan a good strategy before I could cue the first wave of orcs and other baddies. The only limit to my strategy was the amount of coins I defaulted with, which allowed me a specific number of traps based on price.

In every level, the orcs break through barricaded doors and take a general path towards the rift(s) you’re trying to protect. The path is outlined by two ghostly bluish lines, and as you set traps, the pathway of the lines changes in accordance with your trap placement to help you a little more in planning your strategy. Every kill you make gains you points, and these points add to the currency that you use to set more traps.

This all sounds a little complicated, but with the intuitive controls (on the Xbox 360 controller) it only took a few minutes before planning my strategy became second nature. This is a wonderful thing too, as the waves of orcs are relentless and between each wave you generally only have a few seconds to buy and add new traps or sell your old ones and switch up your routine. This is true at least until certain halfway points, where you’re rewarded with a great deal of coins and have another chance to take your time before you’re ready to unleash the last and most challenging waves of enemies in a level. 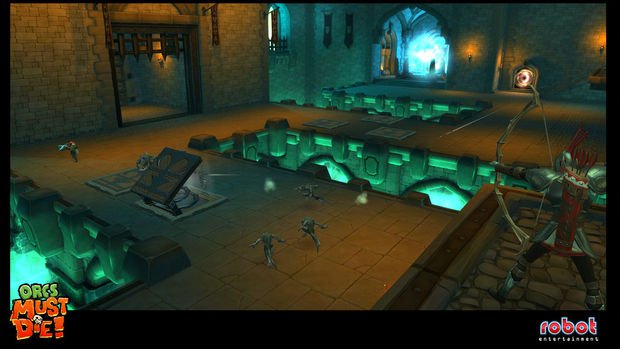 After conquering the second level and feeling a little better about my strategic skills, I was ready to take on something closer to the midway of the game. This level featured a much more open space with a large amount of strategic opportunities and a few archers hanging around to boot. In every level, you may be given some environmental elements and even a couple of elf archers and sword-bearing paladins to help you defend your rift. The strategy increases in these levels since protecting your help can be just as paramount as keeping the enemies from breaching the rifts.

Further in the game, you can also equip spells. Though these generally don’t waste your money, they do zap your mana reserves and you have to wait a period of time for it to regenerate. My favorite equipable spell was an ice blast that could either immediately shatter the enemies in front of me or freeze solid a number of enemies in a horde.

These frozen enemies are not only vulnerable to your melee sword attacks, they also provide as a temporary obstacle to the rush of orcs behind them. This spell is also awesome for slowing the onslaught of particularly hard enemies later in the game, such as armored ogres. 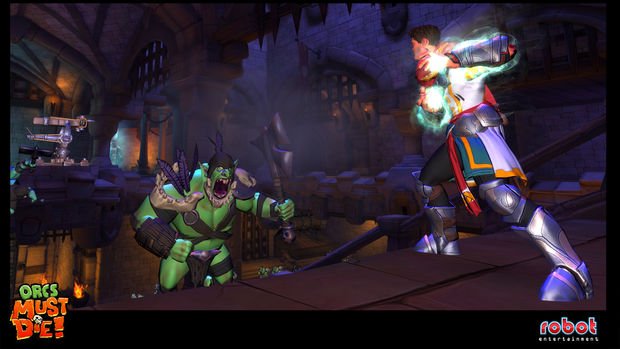 Adding even more complexity to the spells are upgrade paths that are implemented through the use of Weavers cards. You are given an option to choose between different cards that have various upgrade abilities, and then once you’ve chosen your card you can upgrade each ability on the card as you see fit. I went with an elemental Weavers card and with a thousand and some odd coins I upgraded my sword and bow and arrow to have elemental abilities, such as fire arrows.

As for enemies, a great part of the strategic element of the game is that there is a nice variety of different bad guys rushing to your rifts, and each one takes a different strategy to successfully subdue the horde. A couple of examples I saw were quick running rat-like creatures that were easy to kill with melee attacks but with their numbers and fast pace could be much more effectively handled with a smart placement of traps, and odd looking flying creatures that were easy to forget about as I ran around setting traps and getting into the thick of it with gangs of orcs.

The last level I got to play was relatively close to the end of the game, and it was a doozy. I failed it pretty hard the first time, though I gave it a second shot and with lots of help from the team I was able to set up clever barriers and fun springboard traps that launched enemies into acid. I could quickly see how playing this level on harder modes would be a challenge that even the most seasoned gamers would struggle with, though you can bet they’d be enjoying the hell out of it the whole time. 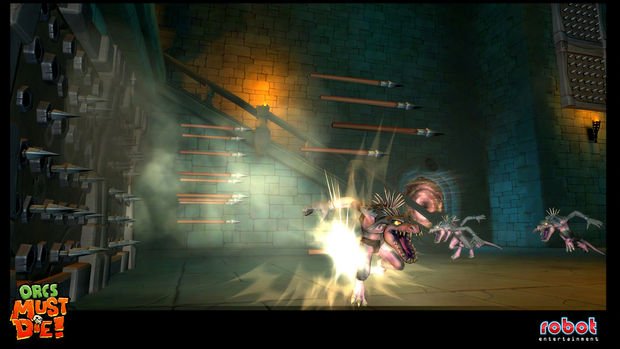 Orcs Must Die! should provide for about an eight-hour main campaign. It will also have tons of replay value thanks to an unlockable Nightmare mode that is far more challenging than the normal mode, and a sort of new game+ feature where you can replay the missions from the start with all of your upgrades fully intact.

This seems especially promising, as you’re given all kinds of points/coins for the clever combination of traps. One example might be setting up a bunch of springboard traps to create a Rube Goldberg device that launches your enemies all over the level until eventually flinging them into acid. This is only one of almost limitless possibilities to rack up combos and get high scores on the Xbox Live leaderboards.

Orcs Must Die! will release some time in the late summer, and though no official price point has been set, you could probably expect it to follow along the Microsoft price guide of good new XBLA IPs. Even at a possibly higher price point, the game is a fast-paced, highly replayable action tower defense experience that I can personally recommend as a gamer who skews more towards action and thinking on your feet than plodding, turn-based strategy games in similar genres.

Filed under... #Orcs Must Die!#tower defense