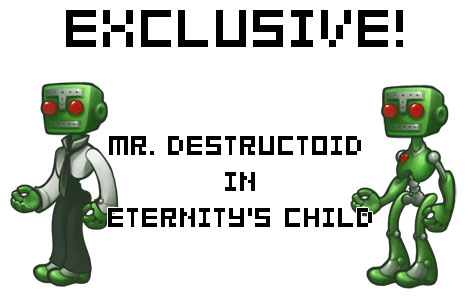 Destructoid readers should no doubt be aware of Luc Bernard’s game Eternity’s Child. The designer — who is active in the Destructoid community — has for awhile now been documenting the title’s development quite publicly. Originally conceived as an Xbox LIVE Arcade title, Eternity’s Child will eventually be finding its home on the Wii via WiiWare and PCs by way of Valve’s Steam service later this year.

The developer was kind enough to send a preview build of the game my way, which contained two levels that will eventually make it into the final product (Bernard is hoping for about 20 in all). We can also exclusively announce that Bernard — a fan of Destructoid — has included his own interpretation of our mascot, Mr. Destructoid, in both the WiiWare and PC versions of Eternity’s Child. While we don’t know what role he’ll play, we’re all honored and thrilled that he’s been included.

Hit the jump for some early impressions of Eternity’s Child.

OK, so up front, I need to say this — Luc Bernard may or may not be bat s**t crazy. A loose cannon of sorts, the outspoken developer has said some things about his own games (and the work of others) that would probably make most PR people blush with frustration. I’ve never met him in person, but in emails, he comes across just as loony. In one correspondence, he apologizes for a late reply because he’d been intoxicated for the past few days; in another, he’s hard on himself because he’s not happy with how Eternity’s Child is shaping up.

His honesty, approachability, and passion is admirable. That, combined with whatever insanity is going on inside his head, has certainly brought to life an extraordinary-looking game. If Eternity’s Child has one thing going for it, it’s Bernard’s art style, a strange mixture of H.R. Pufnstuf and Tim Burton’s gothic sensibilities. In-game, the hand-drawn 2D characters and environments look gorgeous. Layers of clouds pass by one another in the background, and the glow of the moon lights up the sky; ethereal trees and plants highlight the game’s atmosphere.

The titles two main characters — Angel and his floating, yet-to-be-named protector — share the same interesting artistic style. The game’s enemies appear to be mechanical in nature, and include large bat-like creatures, stationary cannons, and flying hearts with wings. While everything looks good standing still, the animation is a big rough around the edges; Angel’s arms and legs move like cardboard cutouts, almost giving the game a puppet show-like feel. Still, considering Bernard designed this game almost entirely on his own, the artistic merits of the game shouldn’t be understated.

Gameplay wise, Eternity’s Child is a pretty straightforward platformer, and a difficult one at that. My excuse is that using a keyboard and mouse is probably not the best way to control this style of game. The “A” and “D” keys move Angel left and right, and the space bar will make him jump. His floating, unnamed protector moves independently and on her own, and the mouse is used to aim a reticule the shape of a heart on the screen. By left clicking and holding the mouse, you’ll fire a steady stream of small orbs at enemies; by holding the right button, you can charge a larger orb for more damage.

Much of Eternity’s Child seems to rely on well-timed jumps on moving platforms, collecting, and bouncing on gigantic springs to catch air and move forward. By quickly pressing the space bar, Angel makes a tiny jump, and pressing it down longer will cause him to hop higher. The issue I found was that regardless, there seems to be a slight lag in what you’re doing and what’s happening on the screen. I’m more used to pressing a jump button and having it happen immediately, as is the case with most platformers. In Eternity’s Child, Angel does a slight bend at the knees before hopping up, which was throwing my timing off left and right. It took a while to compensate for this, but I eventually was able to adapt.

As for the “combat,” my first impressions were that the game was impossible. The first level I fired up had a mechanical bat creature descending upon Angel and pulling him up towards the sky, before dropping him down to the ground. I did everything I could to stop this — I fired a flurry of small orbs in the bats direction, I fired a charged orb at it, and I even tried to run. No matter what I did, I was grabbed and tossed to the ground. During one gameplay session I was able to finally stop the beast, who went down in flames, but I was frustrated. So I expressed my concerns to Bernard.

“You must really suck at the game,” he laughed.

He did admit that some other testers and journalists had some issues, but chalked this up to intentional difficulty.

“Most other testers all tend to die too often,” he wrote. “Because in Eternity’s Child, every platform must be jumped the right way. No mistakes or you die. I just want to make sure no casual gamer will play it by making it so hard.”

Whether or not he was kidding about that last statement is unknown, but a later build of the game he sent me seemed to have the difficulty tweaked a bit. There were far less enemies on the screen, and I was able to make it through most of the level with little or no problems. The second level in the newer build was a different story — I’ve never seen so many enemies in my life. It was nearly impossible to move without being attacked by a flying heart, and the destroyable stationary cannons were liberally placed all over the screen. I died. Quickly.

Narrative-wise, it’s hard to get a sense where Eternity’s Child is headed. Visually, the characters and the world have me interested in its history, but the preview build I had contained no intro and no indication as to what was going on. Both levels seemed to center around platforming and collecting coins, which Bernard says you’ll need to collect to open new worlds.  He likened the system to “jiggies” from Rare’s Banjo-Kazooie.

Bernard has recently confirmed that Eternity’s Child is soon on its way to PCs via Steam, and could hit as early as this week. The WiiWare version of the title is in the hands of the game’s publisher, Alten8; the latest word is that it will see the light of day in both North America and Europe sometime this year.