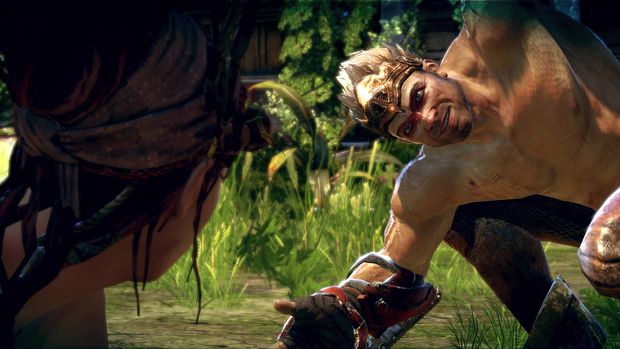 [We sent Community Member Ace Flibble off to Namco Bandai in London to take a look at Enslaved: Odyssey to the West. — Hollie Bennett]

Namco Bandai recently held some preview events for their upcoming action-adventure title, Enslaved: Odyssey to the West here in the United Kingdom. I along with several other Dtoiders were lucky enough to go to Namco Bandai’s offices in London and play three hours worth of the game for ourselves.

Having followed Destructoid’s previous coverage of the game, including Dale North’s preview, Maurice Tan’s impressions of the game and Hollie Bennett’s interview with the lead designer of the title, I was expecting the game to be decent to mildly great.

I was in for a gigantic shock. 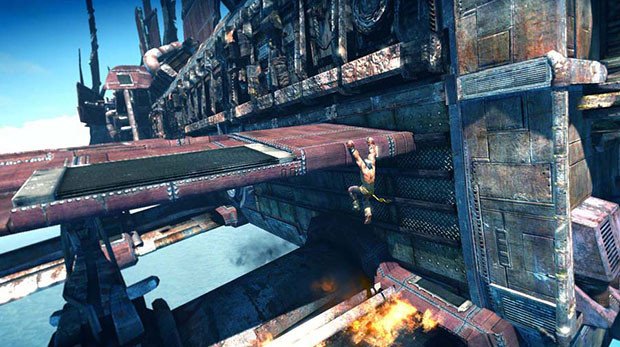 I picked up the controller, selected “New Journey” and sat back in my big, comfy chair. Thirty seconds later I was sitting forward and staring wide-eyed at the screen as I controlled the hero of the game, Monkey, escaping from a burning slave ship. Pipes were bursting all around, sections of the ship tore away and combat mechs were deployed to stop me (as well as to teach me the basics of combat).

Before long I was blown out into the open, struggling to keep a grip on what remained of the wings as I dodged explosions and pieces of the stricken craft. Barely two minutes into the game and already I couldn’t quite believe what I was seeing.

[Editor’s note: You can check out this section in video form right here. — Hollie] 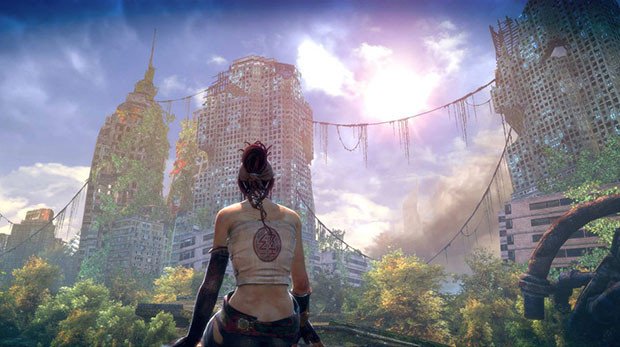 Much has been said about Enslaved‘s world and atmosphere, but it really does bear repeating that this is one of the liveliest and most awe-inspiring settings you’ll ever have the pleasure of exploring. I defy anyone to play this game for more than ten-minutes without stopping to take in the world around them. From the mammoth spectacle of a ruined skyscraper overrun by trees and vines, to a fleeting glimpse of a deer — no matter where I pointed the camera there was always a new and intriguing sight.

What was perhaps even more impressive was that despite all of this detail, the game never had to stop to load within each massive level. Loading screens only popped up between chapters and before particularly lengthy cutscenes.

However, although the world of Enslaved appears random and wild at first, this bright and lush setting wasn’t created just to produce pretty screenshots. Ninja Theory have put the environment to good use, with patches of vibrant flowers and vivid signs from a bygone era offering visual clues as to where the player should be heading next. It wasn’t long before I realised that I had been following the enticing sights of the world around me more than I had been paying attention to any HUD markers. Taking in the gorgeous surroundings often yielded quicker routes to my destinations, as well as providing my with some of the most achingly stunning visuals I have seen in any videogame to date.

The enemies — a variety of robots designed for nothing more than ripping Monkey and Trip to pieces — deserve a great deal of attention themselves. Each type of mech is superbly designed and they all felt both deadly and yet oddly beautiful at the same time. The “C-Dog” mech in particular was quite stunning, albeit terrifying, to view in motion. 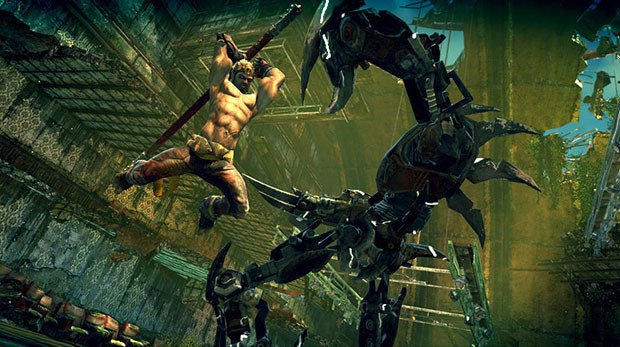 Combat was a highly enjoyable affair, simple to get to grips with yet increasingly rewarding as I took on more varied and more dangerous mechs. Monkey has access to the typical normal and heavy attacks as is common in most action games and brawlers, as well as a wide attack to give himself breathing room and a stun attack. He can of course also use his agility to dodge incoming attacks and he has a shield to block attacks, although this wore out after a certain amount of damage and took some time to recharge.

At first, combat seemed to be an overly-simple task of running straight up to a lone mech and mashing the standard attack button to stun it, followed by a heavy attack to finish it off. However, very quickly I found myself having to make full use of Monkey’s skills and agility to survive. I made the mistake of taking certain combinations of mech too lightly and paid the price; if you’re thinking this is a one-combo button-masher, think again. Enslaved stays away from the typical ethos of sending countless identical enemies against you to feign challenge and instead opts for a much smarter approach, giving you smaller groups of mixed enemies that require real thought and skill to deal with. This ensured that battle never got repetitive or too easy and this resulted in some of the most enjoyable combat I’ve experienced in an action title.

The combat also found its way into some of the puzzles, as several times in the chapters we were allowed to play I came across rooms which needed to be crossed without waking dormant mechs. It was incredibly tense to be walking just a few feet away from a group of sleeping mechs, aware that walking just slightly too far to one side might result in a hard and potentially lethal battle. Combine this with helping Trip cross the region as well and you’ve got some extremely compelling gameplay on your hands. 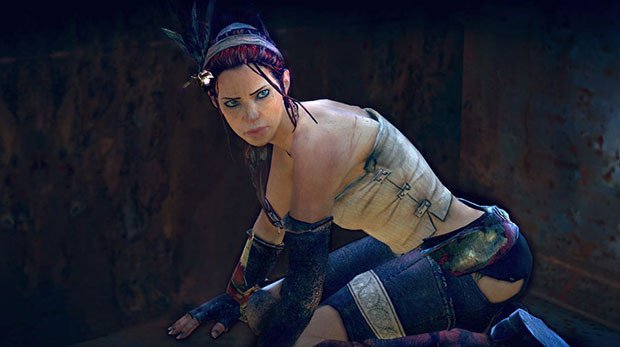 Before playing Enslaved, I had been worried that Trip would prove to be nothing more than a nuisance. After all, nobody enjoys escort missions. However, I am glad to report that any such fears are quite unnecessary, as Trip provides some of the most interesting and enjoyable gameplay and is a genuinely endearing character. She’s intelligent, she can defend herself (to an extent), she’s useful and not once did helping her feel like any kind of arduous task. In addition to opening doors and operating levers that Monkey can’t, she can distract enemies to draw their fire away from Monkey as he makes his way through an area. She can upgrade Monkey’s abilities, shield, health and heal him too. This was all controlled using a simple menu that only required a simple flick of the analog stick to operate, continuing the Enslaved theme of keeping controls basic and instinctive.

As well as battering mechs with Monkey’s staff, a good portion of these chapters was spent swinging from branches, climbing pipes and scaling walls. All of this was handled using just one action button to leap and swing and the analog stick to point Monkey in the direction I wanted him to jump or climb. Unlike many games of this type, especially those that try to get one button to do everything, Enslaved actually pulled it off very smoothly. When I got my timing right it appeared as though Monkey was leaping around the world almost automatically, with each animation flowing into the next seamlessly.

While Monkey’s acrobatic antics were easy to pull off, they didn’t come without a sense of danger. Although it seemed as though Monkey wouldn’t allow himself to be flung into the unknown, Ninja Theory have done a wonderful job of making exploration and climbing feel tense without there being any real danger of aiming a jump poorly and falling to your death. As sure-footed as Monkey is, I repeatedly found myself holding my breath as he attempted each impossible jump and it was always quite a relief when I landed on solid ground. 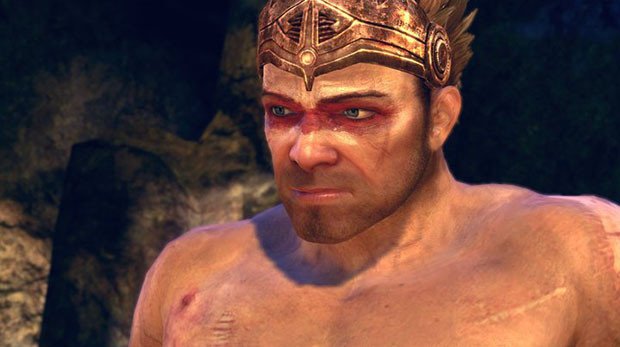 Undoubtedly the highlight of the game for me was the presentation of the characters. Never before in a videogame have I seen such incredible facial animation. During every cutscene I found myself stunned in silent amazement at the accuracy and believability of the characters’ performances. In the three hours that we were playing I didn’t notice a single stilted or stiff animation. Every expression looked so natural that it was quite hard to believe I was playing a videogame and not watching a big-budget computer-animated film. This is matched by a superb script and wonderful voice acting. There wasn’t a single line of dialogue that felt forced or out of place and within the first hour I found myself caring far more for Monkey and Trip than I ever have about any character in a videogame previously. I even found myself tearing up twice, quite a feat given I spent a mere three hours with the game and from the looks of it had only just begun to get into the meat of the plot. Andy Serkis (Monkey) and Lindsay Shaw (Trip) both give Oscar-worthy performances.

It is almost a shame when each scene ends and you are returned to gameplay, as both characters have been brought to life so brilliantly and each scene is truly captivating. Frankly, Enslaved‘s presentation is worth the price of admission alone; the fact that the gameplay is so well-crafted as well is just a bonus.

I can honestly say I have never been sucked into a game as fast as I was by Enslaved. I didn’t leave my seat once while we were playing and the three hours were up seemingly very quickly. Within one minute I was hooked on the gameplay; within half an hour I was hooked on the characters and the world. Whether it was climbing around a damaged and disintegrating plane as it hurtled to the ground, swinging from pillars and branches to get to an enemy turret, sprinting from a giant mechanical dog with my heart in my mouth or just watching the characters converse, Enslaved had me completely captivated and I felt genuinely upset when it was time to stop playing. I absolutely can not wait to get my hands on the finished product and see what happens next to Trip and Monkey.

Enslaved: Odyssey to the West is worth being very, very excited for.