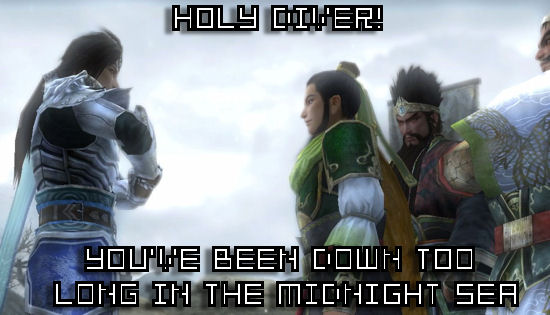 As promised, I attended the London Expo today with one thing on my mind — Koei. My head full of giddy delights (and a lingering flu virus), I hopped onto the Docklands Light Railway and shook my head as I realized that I’d boarded a train containing cosplayers. Yes, I was headed to a geek convention, as that bespectacled kid in the Dr. Salvador costume had confirmed.

My goal at the Expo was simple. Collect as much free stuff as I could. My secondary goal, however, was to get hands-on time with Koei’s two upcoming big hitters, Dynasty Warriors 6 and Bladestorm: The 100 Years War. As you know, I’d been eager to get my hands on the former for quite some time, while the latter has been an interesting conundrum that definitely needed playing.

So, with my curiosity partially satisfied, what did I make of these two very different games? Hit the jump for part one of my hands-on-a-palooza, with my first impressions of Dynasty Warriors 6.

(By the way, a big shout out to Chin from Koei Warriors. Great to finally meet such a valuable news source. Also, many thanks to Len and Mikey of Koei UK, who made me feel very welcome indeed.)

The first thing that surprised me with Dynasty Warriors 6 is that it wasn’t playing right. There I was, hitting the square and triangle buttons on the PS3 controller, attempting to create attacks, yet the two buttons weren’t working in unison. The normal attack button would string together a chain of attacks, but the charge button, which once created different special moves when pressed at different stages of a regular combo, only performed one attack.

This would be the harbinger of what turned out to be a most … unsettling change.

My playtime was limited and without anything in English (it was the Japanese TGS version of the game) it was difficult to get to grips with these unexpected changes, but my first impression of the new system is something that I never could have imagined … Dynasty Warriors 6 has actually managed to simplify the control system — even more than before!

Yes, you read that right, the controls are even more streamlined than before in one of the last games to ever, ever need streamlining. As I played through the game, I discovered that more attacks were being unlocked and added to my combo chain, but not once could I make the regular attacks and the charge attacks work together as they did in previous titles. What we now have is a system where there are two seperate combo chains, each assigned to one button — gone is the art of timing your button presses to create new moves, it’s just hammer, hammer, hammer.

Apparently, Koei is looking at Dynasty Warriors 6 to bring new fans into the fold, and the developers didn’t want to confuse any newcomers with complex controls. The controls were not complex to begin with, so why anybody felt they needed dumbing down is just beyond me.

The saving grace, however, is the Renbu system, something which looks like it may add a little more depth to the chicanery. Again, my time was limited so I didn’t get to grasp what was going on fully, but as you progress through a stage, you add more to your combo, and can use a shoulder button to change up your moves some more. While I never really got to experience this in full, it seems that the potential might be there to make up for the streamlined combo controls. That, however, won’t be something I can confirm until I get my hands on a full copy of the game (and rest assured, I made sure that this will happen), but hopefully there is something more involved just lying under the surface.

The Dynasty Warriors series has never been known for cutting-edge visuals, and this latest installment is no exception. Frankly, your surroundings are sparse as ever and the enemy peons are abysmal looking. Where Dynasty Warriors 6 shines, however, is in its art design. The playable officers look absolutely stunning in their new makeovers and the attacks, while simple to perform, at least look very complex and offer an aesthetic thrill that I found addictive. There’s nothing quite like running into a group of enemies as Zhao Yun and leaping at them like a whirling tornado of spear-flavored death.

So, what’s the verdict? Renbu or Renpoo? Right now, it’s tough for me to say. I can’t deny that I left Dynasty Warriors 6 feeling a little disappointed, and wanting for there to be more. That said, I didn’t have time for the new controls to grow on me, nor could I effectively get into the meat of the Renbu system. In the coming weeks, I intend to get a full-on preview with the game where I can tackle it at leisure, without cosplayers dressed up as Yuna getting in my face. Until then, I am going to confess that my confidence has been shaken, though my hope has not been lost.

Next time, I’ll be sharing my thoughts on Bladestorm: The 100 Years War. Was my experience more positive? Does it deserve the attention of the Destructoid army (spoiler: Yes and yes!)? Keep your eyes on Destructoid for my hands-on skinny of the battle between England and France.