I had the pleasure of getting some quality hands-on time with Crysis last week at a swanky little press event EA threw. How swanky? Well, it all took place on a freaking aircraft carrier! Yeah, it was that swanky.

Unlike previous events, Crytec and EA really wanted to make sure the press really played the hell out of the game. Which we did — for five hours straight. Read on to see what I thought about the single player campaign, the mulitplayer modes and the map editor. 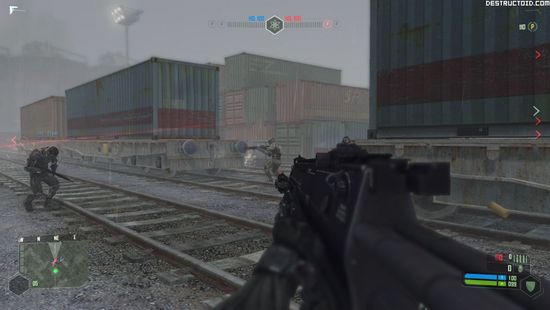 Before we were given the chance to play some of the single player, Crytec and their partners gave a brief presentation on the Crysis project. I’ll just give you some of the interesting bits from a couple of the presenters. The CEO of Crytec, Cevat Yerli, talked briefly on Crytec’s past games; which were Dinosaur Island and Far Cry. That was actually pretty surprising to me when I heard they’ve only had two games released up until this point. Cevat also emphasized that they put a lot of work into the multiplayer and said they designed it so it could be a standalone game. Not that it’s actually going to be a standalone (as far as we know) but that they put as much work into multiplayer as they have with the campaign. Dan Vivoli, Senior V.P. of Nvidia, then stepped up and talked about the design aspects of the game. The most interesting thing about his speech was when he said that this is “their Halo 3“. I believe he was referring to the hype meter and how this is considered to be the most anticipated PC game ever, but take it how you will.

During one of the presentations, a short video of the campaign was shown and it finally became clear as to why we were having a LAN party at this location — Part of the game takes play on a aircraft carrier. The main character was running through the hallways of the ship, explosions and gunfire were exploding all over the place as a group of aliens were attacking the ship.

After about 20 or so minutes of this, we were set lose to play some single player for one hour straight. The level started off just before the break of dawn in a North Korean jungle. You and a group of soldiers are in North Korea as one of your first major objectives was to take out two anti aircraft weapons. It was completely up to you how you wanted to do this mission. You could either go down to the beach and hop on a ship to go to the small island that held one of the anti aircraft units. Or you could hope in a car and go into the jungle to the other anti aircraft unit. That’s something I really liked — it’s your choice how you wanted to do the mission. Another great feature was that as you progress in your mission, night turns to day as your progress in the game. Maybe I’m just easy to please, but a real time night and day effect was really neat.

The enemy AI was extremely smart. I have never played a game where the enemies were this damn good. They knew how to run around on the map and get the surprise on you. There were a few times I thought I would nail the enemy when jumping around the corner, only to see that the were hiding behind a tree and the guy just threw a grenade at me while one of their other buddies comes out of hiding from the distance and started shooting me with dead on accuracy. They know how to use teamwork and how to use their environment to their advantage.

Like my colleagues have been saying, Crysis is absolutely gorgeous. The level of detail in everything was just fantastic. And before you ask, this was on DirectX9. They did have one game of Crysis running on a laptop in DirectX10, we just weren’t allowed to play it. We could only stare and look at the super shininess of it as someone played it.

But like my colleagues have also said, I just wasn’t really wowed by the game. Don’t get me wrong; I did enjoy playing this game. I thought it was great and will definitely be picking it up (well, once my computer can handle it at least). I think the Nano Suit will really help differentiate it from other FPS games, but if you were to simple take the suit out of the game, it would easily feel like other shooters on the market.

Speaking of the Nano Suit, I think it’s a really great idea for a gameplay feature, but the way it seems to be executed isn’t the greatest. The suit seems to run out of energy way too fast when using some of the special abilities like cloak and speed. I noticed that cloak seemed to be almost pointless during the game too. Even when I turned on the cloak, the enemy, from a great distance mind you, could some how still see me and nail me. 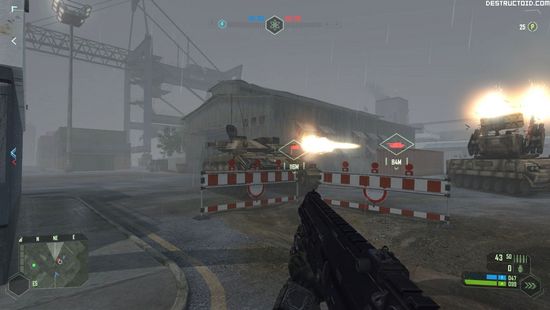 Here’s the basic gist of it all: In Power Struggle, it basically plays out like a campaign game where you have various objectives to do. On the map, there are several places you have to capture to score points, get weapons upgrades and get vehicle upgrades. Each side will have a variation of the Nano Suit and every time you spawn in your base, you can purchase weapons such as machine guns, rocket launchers, snipers and a mess of other stuff. To get money to purchase weapons, you have to capture points or kill enemies.

The big thing about this game type is that you really need to coordinate with your teammates. Otherwise yelling at the guy on the end of the table doesn’t really work out to well — especially with your opponent’s one row behind you. It became quite frustrating toward the end. It was hard understanding the scoring system and I more or less stopped caring and just wanted to play the next game type. I’m more used to just hoping into a match, killing some bitches, and then moving on to the next battle. 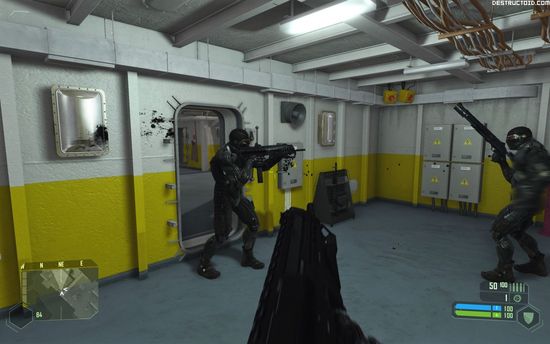 Before we had to leave the ship, I took a real quick look at the map editor for Crysis. When I say you can edit every single aspect of the game, I mean you can actually edit every single aspect of the game in both single player and multiplayer. From the way a solider patrols a path, to how gigantic you want a Palm Tree to be, it’s your call. Want to make a river path that will lead you to each one of your objectives so you don’t have to fight a single enemy? Well then you can you cheap little punk! It’s going to be really exciting to see what people will come up with.

All in all, I had a great time with it and I’ll be looking forward to its release on November 16th. In the mean time, you can go check out the Beta that was released earlier in the week to get an idea of it yourself.