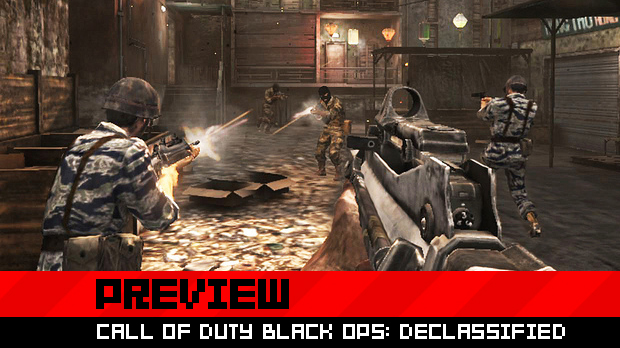 In the same way armchair economists have explained how the release of a Monster Hunter title would “save” the Vita in Japan, many have espoused the necessity of a parallel big-name release for North America. That sales boon is expected to come in the form of Call of Duty: Black Ops: Declassified, which was announced for the Vita during this past E3, albeit with nary a screenshot or video clip to go on.

Still, whereas an unspecific Monster Hunter for the Vita was said to be scheduled for release before the year’s end, Declassified exists and is quite playable. I’m not sure it’ll be how the west is won for Sony’s wonderful handheld, but it’s definitely a Call of Duty game and they sell staggeringly well.

If supposed common knowledge is worth going on, a lot of people play Call of Duty games for the online multiplayer (though some don’t at all), and since that was what I got hands-on time with, that’s where I’ll begin.

Save for some mindless zombie exterminating in World at War and Black Ops, I haven’t spent extended time with the series since Call of Duty 4: Modern Warfare, which feels like it came out ages ago at this point. However, if you’ve played any Call of Duty game, or even a lot of the shooters that have followed the first Modern Warfare, you should be instantly familiar with how it plays, save for a few Vita-specific changes.

There are two options for sprinting in Declassified. Running (just by moving the analog stick pressed fully forward) will eventually put you into a sprint. Alternatively, you can map the command to down on the d-pad (you don’t have to hold it). Aim steadying, a necessity for sniping, can be done by pressing anywhere on the back touch panel. In one of the cooler additions, grenades show up on the HUD and by dragging the grenade icon from its corner you can place grenades right on the screen where you intend to throw them, which was rather neat in practice.

Kill streak icons, similarly, pop up on the bottom left corner of the screen and are perfectly accessible. With a tap on the mortar strike icon, I brought up the map, and with a tap on the map, I was able to rain fiery death from above. Incidentally, I did so terrifyingly close to my own position so I was able to watch the fires of war consume my opponent quite personally. Tapping any real estate left on the touch screen without a specific function yields a knife swipe — or a healthy jugular impalement if you’re within striking distance of an adversary.

Everything else is pretty much a scaled down version of what you might expect out of a Call of Duty game. I quite like the personal nature of four-versus-four competitive multiplayer, though I’m sure that’s bound to turn some people off. The six maps are more intimately constricted given the maximum player occupancy, but include a variety of thoroughfares and most buildings have multiple points of entry. Of the two I tried out, I was much more fond of the snowy outdoors locale than the war-torn, brown urban decay, although I’ve always had a soft spot for boreal, wintry settings in games. (I live in San Francisco; snow is a vacation, not something that inhibits and burdens my life every winter, and it’s pretty.)

As mentioned, Killstreaks are a part of the multiplayer experience, as well as different bits of customization, like creating custom loadouts, and prestige levels, so there will still be the proverbial dangling carrot encouraging play.

I was also shown (hands off) a bit of the single-player portion of the game which aims to fill in events between the first Black Ops and the upcoming Black Ops II (random aside, I like saying “Blops”). Ten different campaign missions, some featuring Black Ops characters, are strung together with little cutscenes beforehand meant to fill in story events. Each mission is said to have its own specific “hook,” while their bite-sized nature is geared towards portable play. The one I was shown tasked the player with saving some hostages in a two-minute time frame.

In addition to replaying campaign missions on higher difficulties, solo gamers can look forward to a “Time Trial” mode that involves cardboard cutout shooting and “Hostiles,” a survival mode that swarms you with enemies until you die (or until the world runs out of non-descript terrorists, I guess).

I’m still just a bit wary of the game, which is being developed by the same studio that developed Resistance: Burning Skies. Just from a visual standpoint, I think it looks strangely less impressive than the latter, but that might be because I find the “modern war” look a bit boring and plain. Still, this game was announced at E3 without even a screenshot or trailer and it’s already dropping this month, which seems to explain the compact nature of the solo components, whereas the online multiplayer needed only to built around the tried-and-true Call of Duty framework.

While going hands-on with the multiplayer for half of an hour is enough for me to tell you it plays well enough and familiarly, the success of the final product will be contingent on a number of factors, including how many other people are playing online. It’s going to be interesting to see how well it sells and if it moves systems, which of course should have some correlation to how robust the online community is. There doesn’t seem to be much there in regards to single-player content to warrant a purchase unless you desperately need to play Call of Duty when you’re away from your consoles.