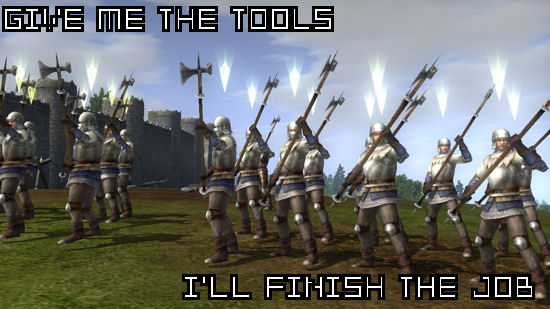 Welcome to my second post of hands-on impressions from Koei’s London Expo booth. As those noble few of you will remember, my thoughts about Dynasty Warriors 6 were surprisingly less than stellar. Could Bladestorm: The 100 Years War be the rookie upset that tips the balance?

I have to say that despite my very limited time with the game, I could see something of great potential in Bladestorm, something I can’t wait to unearth more of with a full copy of the game. If you’re a fan of strategic titles and quirky gameplay, I would advise you to put any Warriors-influenced bias to one side and hit the jump, because this might very well deserve your attention.

You listening to me? Make good on your demands for fresh IPs and hit that jump.

Firstly, I should point out that Bladestorm is not a game that demos very well. Despite its tactical roots, the game prides itself on a variety of RPG elements that enrich the title more as you play. Koei UK was very keen to point out that playing through the first stage simply isn’t enough to get a sense of the scale that battles can achieve once you level up and are able command larger armies. The promise of full-scale warfare that the player can personally lead is a thrilling one for budding megalomaniacs such as myself and something I can’t wait to get my wretched talons on.

But enough of the promise, what did I see? What I saw was something very fresh and yet equally familiar. As a fan of Koei’s cult hit Kessen series, I felt instantly at home with the game’s main method of gameplay — allowing you personal control of a battlefield unit. At the start of each battle, you control your own personal soldier, a self-created avatar who represents you throughout the game. In your bid to climb the ranks and become a hero of the 100 Years War, your goal is to join up with allied units by moving into range and hitting a button (X on the PS3, which I played this on). You will then become part of that unit, or rather, the unit will become part of you, as you now control the entire group as one.

From there, you will be able to charge into the enemy ranks, holding down a single button to keep your warriors fighting, while using a variety of other buttons to unleash special attacks. The idea of the game is to choose your units and the timing of your special moves wisely, making sure to attack the troop types that your current unit is strong against and joining up with different groups of soldiers on the battlefield as and when needed. As you do this, you have to be making sure that you fight as one with your army. The focus on balance and efficiency is the major draw here, and the ability to switch to nearby units at any time allows you the opportunity to always make sure you’ve the right tools for the job.

The key to winning a battle is to capture bases in a manner that should also feel familiar to fans of the Dynasty/Samurai Warriors: Empires series of games. The only trouble is, it was at this point that I remembered how painful it was to play videogames while stood up at those horrendous kiosks, and my mind wandered right over the tutorial that explained how bases were captured. What followed was an excruciating amount of time spent wandering round in circles, beating up lone archers, unwilling to ask for help and feeling the burning eyes of gamers behind me, analyzing my every worthless move onscreen.

However, bases are confirmed to be in Bladestorm, believe that.

The closest I got to RPG elements in the game were a few in-battle level ups and a dropped item, but once I get a full build of the game, I’ll be able to dive into this side of affairs. The potential is there for you to take your unknown nobody and turn him into a famous general, capable of commanding massive armies and crushing your foes into dust. Even the early goings felt fun though, so the knowledge that it will expand and improve as the game continues certainly entices.

Graphically, as always with Koei, this is nothing you will pray to the Gods of Blu-ray over, but the aesthetics did the job. Hopefully, the graphics are compromising depth for scale, meaning we will see some huge battles later on. They’re certainly not ugly visuals by any means, but graphic whores can skip this and wait for Folklore or something.

Sometime soon, I should be getting a full copy of Bladestorm: The 100 Years War so I can give you a full review. Until then, I would advise that gamers looking for something fresh keep their eyes on this one. While I don’t expect Bladestorm to revolutionize the games industry, I do expect a deep and enjoyable action/strategy game that will keep players occupied more than adequately throughout the cold winter’s nights. You have now been advised.