There seems to be a certain stigma in gaming, as of late, that Japanese developers have lost their touch when it comes to creating experiences that appeal as much to western gamer as they do to the Japanese. Once dominant franchises, such as Final Fantasy, have fallen by the wayside to the likes of Call of Duty and have been further left behind, in terms of design, by the mammoth undertakings of titles like The Elder Scrolls V: Skyrim. Times have definitely changed, but has gaming’s past premiere home of compelling content really been separated from the western world?

Binary Domain, from Sega and the minds behind the Yakuza series, is an attempt to bridge the gaming world’s differences. Upon first glance, a very déjà vu sensation sinks in — with its Gears of War styled combat meets Terminator aesthetics — but judging this game by its looks alone is a huge mistake; as it’s what’s on the inside that makes this game special. 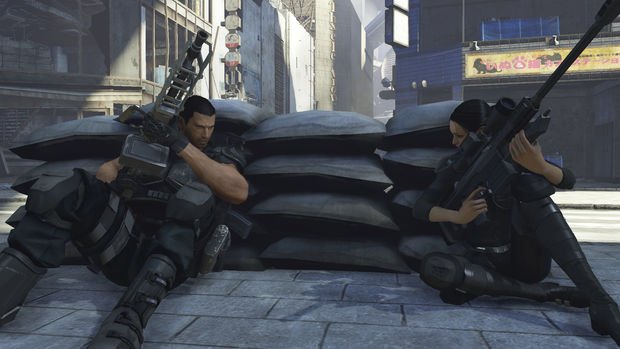 Back in August, our own Maurice Tan went into great detail describing the many systems that furnish Binary Domain‘s single-player squad-based shooter mechanics. From the games use of cover, to its voice command system, all the way to having to build trust amongst the game’s seven squad mates; Binary Domain takes some of gaming’s best features and wraps them up into a fresh and unique experience.

To recap the story, it’s the year 2080 and most of Japan has been flooded due to rising water levels. Society has rebuilt on the remains of the ruined cities and has thus been segregated into to an upper and lower strata. Technology though, has continued to advance in this dystopian future and eventually leads to a robot infestation. That’s were Dan Marshall and a crew of ragtag soldiers come in. It’s up to them to get to the bottom of this international incident, especially when the “hollow children” — robots that actually believe they are human — turn up. While the premise sounds eerily familiar, it’s conveyed in a way that is not normally seen in video games, let alone the shooter genre. 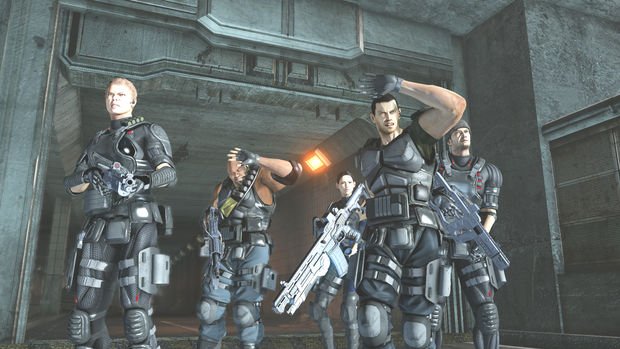 My hands-on of Binary Domain began with Marshall, and his brother-in-arms, Big Bo, thrust into the derelict highways of Japan. As we pressed forward through waves a robots, dismembering each limb by limb in enjoyable cover-based combat, it was actually the banter between the two comrades that made me realize Binary Domain wasn’t a typical shooter.

While the dialog was by no means exceptionally compelling between the two — as Bo’s character, at times, felt very stereotypical — the simple fact that I was given the option to directly answer the brute man (and later other teammates) via voice created a slightly more invested experience for me. The responses were simple and generally dealt with story progression, but the freedom to answer in a wide array of attitudes was far more natural to shaping the narrative than Mass Effect’s dialog wheel. 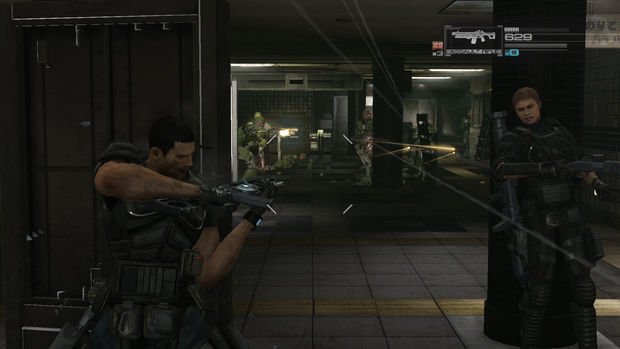 It’s in creating these types of engrossing experiences that the team behind Binary Domain hopes to bridge the gap between eastern and western gaming. The core of game is built behind a very competent shooter, which should greatly appeal to the western market, but it also has a rich story — a strength of Japanese design.

My only concern from what I have seen of the plot, is the length of each story sequence. While they don’t approach the ludicrous durations of say a Metal Gear Solid 4 cutscence, they definitely remove the player from any sort of control for lengths that may turn some casual gamers off. Personally I didn’t have an issue with this, as each scene was well acted; and in the case of the “hollow child” moment that took place in the slums of Shibuya, the overall quality and believability was just as impressive as any Hollywood blockbuster. It was shocking, gripping, intense, and hopefully something representative of the story’s final product. 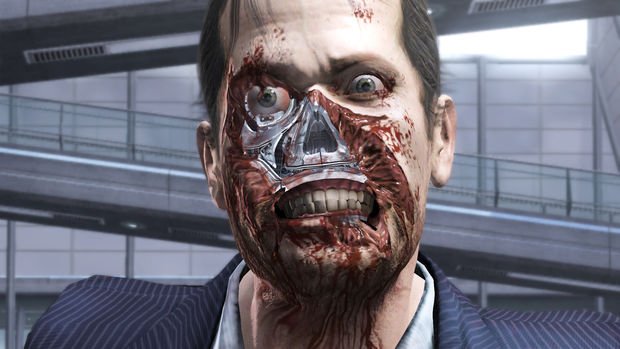 Before my time was up with Binary Domain though, I was given a brief opportunity to go hands-on with the game’s three rather straightforward, five-versus-five, multiplayer modes: Team Deathmatch, Data Capture, and Domain Control. Team Deathmatch is exactly what one would expect in a competitive shooter. Data Capture is Binary Domain‘s take on capture the flag, and Domain Control see teams vying for territories in rather confined maps.

Before the start of each mode, players are able to chose from the typical types of classes that call home to shooters (i.e. sniper, soldier, scout) and then allocate points towards custom loadouts and items to gain a tactical advantage. During each skirmish further points are earned through kills and can later be allocated towards more supplies after death. 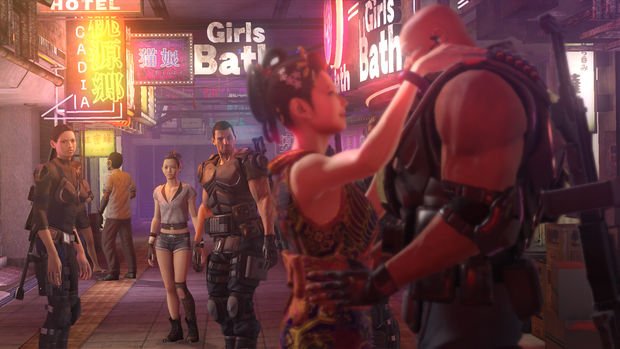 Multiplayer is definitely the weakest link when it comes to Binary Domain. While the mode doesn’t feel tacked on per se, it just doesn’t have the overall polish and creativity that the single-player campaign contains. Hopefully there is more planned for the games online affairs, as I would love to see a robot massacring take on Gears of War’s Horde Mode somewhere down the road.

With only a few short months away it’s hard not to get a little bit excited for this intriguing third-person shooter. Its gripping story of robots versus humans, good versus evil, and the lower-class versus the elite of humanity has made Binary Domain on my most anticipated titles for next year. The game just exudes human emotion — fitting considering Binary Domain releases on Valentine’s Day.