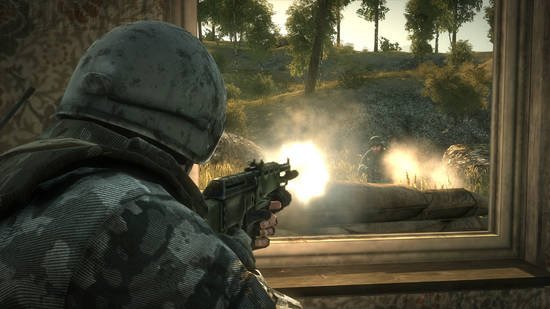 Ah yes, Battlefield: Bad Company. The Internet was set into a fury of rage not too long ago over the microtransaction business EA and Dice were trying to pull. Even though the microtransactions are now gone (in regards to the guns, anyway) many still feel that game won’t be worth their time.

So what did I think of the game? You’ll have to hit the jump to find out.

First off, this was the latest build of Battlefield: Bad Company we got to play. In fact, outside of DICE and EA employees, me and the other gaming press and community members that were there were among the first people to play this newest build. I haven’t messed with the beta at all but what we played was apparently leaps and bounds better. The game looks finished with some minor bugs here and there, none of which hindered the gameplay.

We started off on the second level of the game. You and your squad mates’ (Sarge, Sweetwater and Haggard) objective on this level is to take out various gun and missile emplacements spread throughout the level. Since this team of four is by itself, no one will notice if they do anything on the side, such as finding gold throughout the levels. Hey, a little side money never hurt anyone. 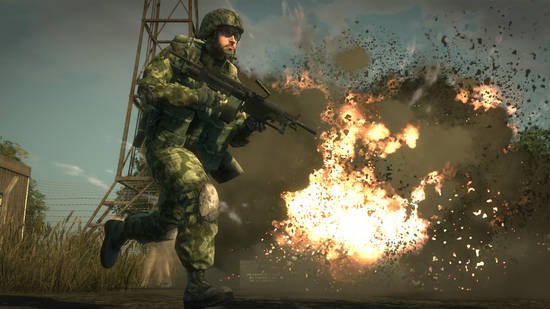 As soon as the level starts off, you’re told by your teammates to inspect the house you’ve been dropped off next to. After you’ve cleared the place and found some gold, you’re told to move on and go forward with your mission. The levels are extremely detailed and there’s a lot of space for you to move around. Even though the levels are huge, you have to stay within the boundaries. There’s a minimap that shows your current position on screen and if you stray off into the red territories for too long, it’s game over.

I found it odd that you have such a limitation on where you can go on the map. I can understand that the developers don’t want players to get lost, but it just feels very limiting. It can also really get in the way when you’re in the middle of a firefight if you’re not paying attention to where you’re running off to.

You’re also limited to just one gun for the most part. You can pick up your enemies’ weapons, but you’ll have to drop your current weapon. Weapons will range from pistols, sniper rifles, rocket launchers, and automatics to a whole bunch of others, and a handful of the weapons have secondary firing options. While you’re limited to just one gun most of the time, you will have a few disposable weapons within your inventory, such as grenades, C4 and a few other things. There are supply depots spread across the map too, which will come in handy as I found myself running out of ammo a lot. 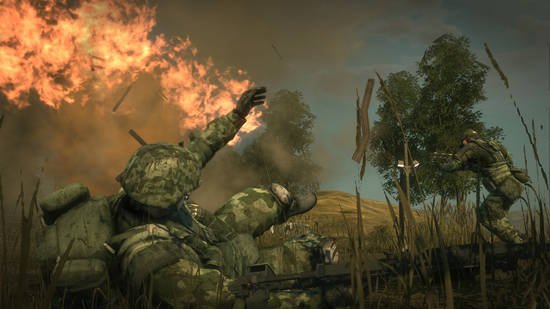 While I was trying to get used to the controls and weapons, I noticed that my A.I. partners weren’t as completely retarded as I feared they would be. They would take out enemies and they made for a good distraction while I had to heal myself.

The health system threw me off a little in Bad Company. I’ve become so used to the regenerative health system as of late (see Halo, Brothers in Arms, Call of Duty 4, etc.), that I was really surprised to see a 100% health bar at the bottom of my screen. If your health gets too low, the screen starts to turn dark and will stay that way until you heal yourself. You only have a limited amount of health injections you can carry with you too.

Still though, even if you die, it’s not really a bad thing. You get kicked back to your last checkpoint, and everything you’ve destroyed and killed remains as you’ve left it. I’m not exactly sure how I feel about this aspect. Sometimes, you’ll be walking for a while until you get back to where you died with nothing to do in between. 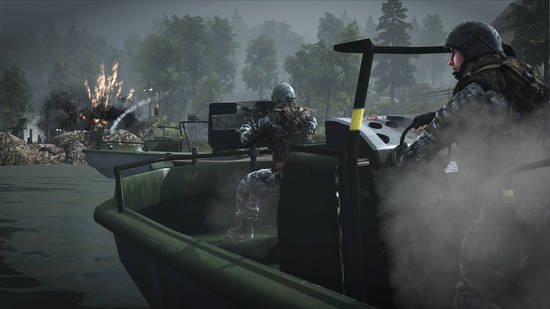 After reaching some checkpoints, which triggers cut scenes every time, I came across a few vehicles. At this point, you can pick between an armored truck and a boat. Either way, both paths will have you cross enemies in vehicles and both paths will take you to a facility where you have to destroy some gas tanks. Once you get in a vehicle, your teammates will automatically hop in and take up the mounted guns. At anytime, you can switch positions to take up one of the mounted guns yourself. This will leave you stranded, though, as your teammates won’t drive the vehicle you’re in. The vehicles can get destroyed, too, as they have a similar health system as you do. You can repair the vehicles, but if one gets destroyed with you inside, then you will die too.

The enemy A.I. for the most part is pretty good while on foot. Enemies become completely retarded, though, when they’re driving vehicles. I noticed this more so on the land vehicles, as they don’t seem to know how to turn around or go in reverse while on a small road. Finally, on the subject of vehicles, I noticed it was actually difficult to control the Armored Vehicle and the trucks. It was very rough to make turns and they all seemed way too slow. There’s still plenty of time to fix those issues, though.

After destroying the gas tanks, you come across a Russian Mortar Strike device. This baby is a lot of fun to use. It’s a homing device that actually belongs to the enemies you’re fighting. Of course, the enemy headquarters doesn’t know that you’re using it, so they will blindly listen to your commands. All you have to do is aim the device at any place that you want targeted and after a few seconds, a few jets roar overhead and drop a ton of bombs. You can do this an unlimited amount of times, and it’s totally fun abusing the thing.

The level continues on more or less the same, with you driving around and taking out weapon installations to make it easier for your forces to roll on through. It was at this point we all took a break for lunch. 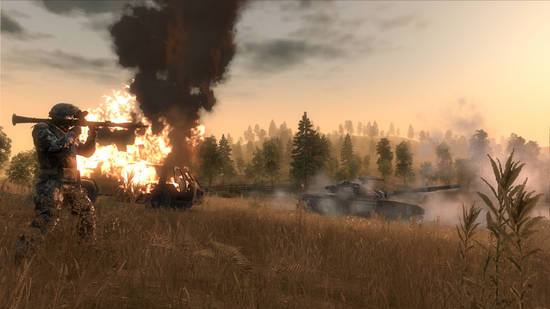 After we got back from having some delicious pizza, it was time to try out the multiplayer. Now here’s where I can see a lot of people getting upset. As of now, Battlefield: Bad Company is only going to come with one map and one gametype. The map is called Harvest Day and the gametype is called Gold Rush.

Even though there’s only one map, it really feels like it’s five maps in one. The map is huge and every time the offensive side wins a round, a new section of the map is opened up. There are villages and houses in each section and tons of vehicles, too. The map starts off with lots of space and wide open fields. The red boundaries from the single-player campaign are here, too, and if you get out of bounds for more than five seconds, you will die.

Before the match starts and every time you die, you will have a choice between five different classes:

Yeah, as you can tell, I spent a lot more time with the Recon class than any of the other classes. What can I say? I like being the prick that picks off people from a distance. Each class will have different types of special items, such as grenades, C4, sensors and that Russian Mortar Strike weapon from the single-player game. You can also pick up weapons from corpses, but you won’t know what you’re getting, as there’s no obvious notification of what you’re picking up. 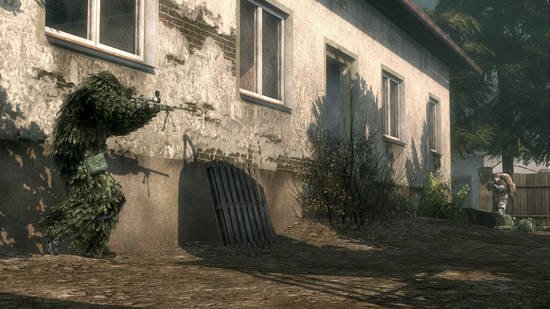 Bad Company supports up to 24 players and has an … interesting squad system. You can make a small little clan with three of your buddies and while you’re playing the game, you can only communicate with your three friends. You can never speak with the rest of the team.

Now then, on to Gold Rush. In Gold Rush, the teams are split up into two sides, offensive and defensive. The offensive side’s objective in Gold Rush is to invade the defensive base and destroy three gold crates. After all three crates are destroyed, the next section of the map is opened up, and you do it all over again. Destroy three crates and open up a new section until all the crates have been destroyed.

The defensive side is to, obviously, defend all three crates. The crates are located in buildings and just like in the campaign, the buildings can be destroyed. The crates can be repaired, though, and the defensive side has an unlimited amount of respawns, while the attackers have limited respawns. Warning alarms will go off when the crates are being attacked, and you have a few seconds to disarm any bombs that are on the crates. 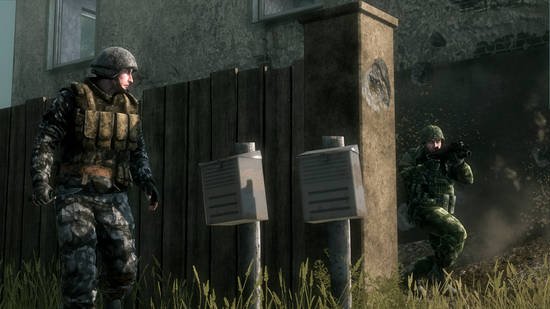 As you play through, you will get in-game medals for doing various things ranging from knifing five people to getting two seconds of airtime with a vehicle (which isn’t that easy, actually). You also gain experience points and once you get to level 25, five new weapons for each class of soldiers will be unlocked.

Overall, I found this mode to be really fun. It’s always a power struggle and just when you think you’ve won, the battle can easily turn around. However, only having one map [Update: Eight maps! Not one!] and one gametype right out the box is a very poor move. We were told that new gametypes will be released in the future.. Yup, microtransactions look to have just been shifted to another aspect of the multiplayer.

Battlefield: Bad Company will be out on the PlayStation 3 and Xbox 360 at the end of June.