Before going out to view Prometheus, I felt it necessary to watch the first three Alien movies again to get a more cohesive feel of the universe. After coming away from this marathon viewing, I noted once again how different in tone the three movies are to each other while still managing to weave a compelling narrative. My personal favorite of whole series is decidedly the original Alien, as the movie ratchets up the tension in great scenes of psychological stress between the crew members of the Nostromo, and then eventually it all pays off in a structure very reminiscent of most modern day slasher films.

I bring this personal preference up primarily because after getting some hands-on time with Aliens: Colonial Marines, I feel more than a little conflicted about the game’s tone. While the fan service is doled out in helping heaps — especially in regards to Aliens — the actual single-player experience seems a little mired in convention.

Aliens: Colonial Marines takes place sometime after the third film, though it sticks much closer in theme to Aliens. The game begins with your team responsible for investigating the Sulaco after it reappears above the atmosphere of LV-426. Upon investigation, you come across Weyland-Utani mercenaries lurking throughout the doomed ship. Immediately this turns into all-out warfare between your ship and the Sulaco, and you and your crew end up crash-landing on the moon right near the presently overrun Hadley’s Hope colony.

Fans of Aliens will immediately take in many details that tell the chronology of events, such as the turrets used by the original Colonial Marines, now spent of their ammo, or the computer used by Bishop (who is back again, of course) to try to gain access to more of the colony’s interface. It’s all there, and it’s all certainly neat to take in. But then, the Xenomorphs arrive. 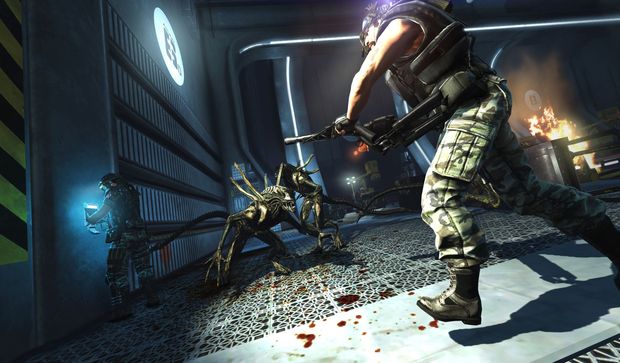 The single-player campaign starts to give a sense of Déjà vu to any seasoned FPS player. The aliens themselves are not really frightening, not even in the “monster closet” sense like the creatures in Doom 3. This may be because much like the original marines, you have a ton of firepower. Of course, the demo I played had nearly everything already unlocked — though as per suggestions, I stuck with the weapons you would normally have at this moment in the game. While the aliens certainly looked cool, they didn’t necessarily act with any sort of real predatory A.I. as I mowed them down and cleared the area a couple of different times while running back and forth to finish objectives.

Going further into the ruined depths of the colony had both high moments and low moments. After helping Bishop set up motion trackers and defending the main comms area, my character and one other marine were tasked with going even deeper into the colony, at which point I was given a smart gun to take down any of the Xenomorphs we might come across. Of course, a huge Xenomorph attack was pretty much telegraphed at this point, so when the swarm came I wasn’t exactly shocked. The smartgun also took down so many Xenomorphs with auto-aiming ease that I felt like I was playing any number of other shooters that involve heavy guns and swarms of enemies. Yes, the Xenos were dropping from the ceiling and leaping from dark corners, but they were essentially cannon fodder for a short period before the objectives changed and urged me to move on.

The H.R. Giger style of Alien constructs really came into play soon after this point though, as our characters ventured deeper into the infestation and got a good look at the strange squirmy shiny looking metallic “architecture” of the Xenomorphs environments. The demo soon ended after this point, just as soon as things were starting to get truly fresh and interesting. To be fair, slowly making our way through this environment with the motion tracker had it’s fair share of tension. 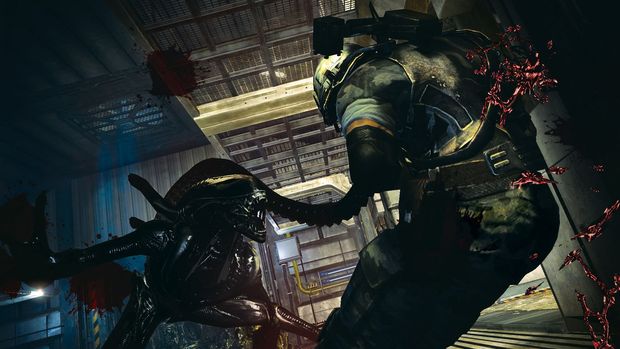 The biggest issue I have with what I’ve seen so far is in the fact that the human menace of the Weyland mercenaries seem to be more of a challenging opponent than the Xenomorphs. The aliens don’t seem to have very adaptive A.I. and don’t really hide out so much as wait for you to chance upon them. They seem at this point to exist solely to jump at you and quickly get mowed down.

This is allayed quite a great deal within the multiplayer structure of the game where I had a chance to play two similar modes: Escape and Survival. I came away much more excited for the multiplayer than the single-player and its desire to feed so much fan service while somehow forgetting to add fresh elements of game design to the mix.

In both of these objective-based modes, you play as either a team of human marines (with one spawn and you’re out unless revived quickly by a teammate), or a team of Xenomorphs bent on killing the humans before they can finish their objectives. 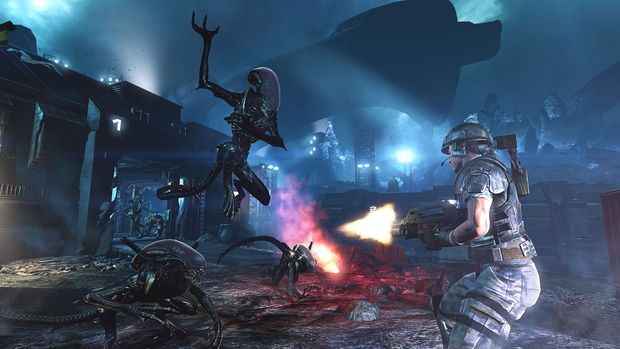 The marines play as expected with the usual weapon loadouts and upgrades we’ve seen with many other FPS games, just set in the Aliens universe. The Xenomorphs, however, have three different classes — soldier, spitter, and lurker — and they’re all generally based on closer quarters combat.

As the Xenomorphs, you can jump to ceilings and walls and crawl through vents while your vision is altered to see the marines in the level very clearly. You also have special upgradeable moves depending on your class that integrate a little strategy into the different modes. Soldiers are your basic melee-based attackers, while lurkers leap from the shadows, and spitters live up to their name, spitting acid like the hissing Xenomorphs in Alien 3.

The gameplay in multiplayer is fast-paced and genuinely fun, and playing as the marines can actually be a much more tense experience than what I witnessed in the single-player campaign. You’re constantly ambushed by the opposing Xenos if you’re not looking over your shoulder. Getting killed feels especially punishing, as you’re forced to watch the comrades you’ve let down get picked off by the opposing team, one by one. 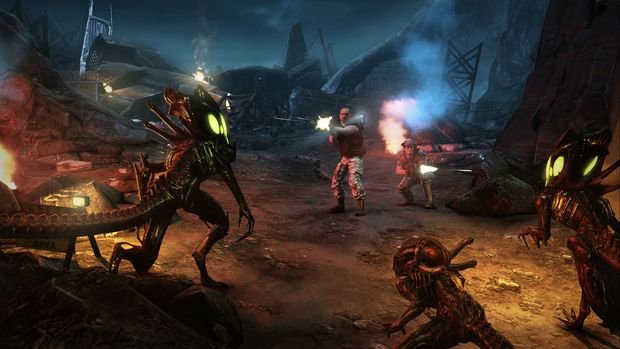 Perhaps the reason the multiplayer appeals to me so much more than what I witnessed of the single-player campaign relates back to personally liking the movie Alien more than Aliens. I prefer my Xenomorph horror of a less blunt and in your face kind, and more of a psychological thriller wherein you’re faced with some dangerous unknown and must actually struggle to find a way to survive.

As for Aliens: Colonial Marines, as a total package this should be a solid enough shooter to appease all sorts of fans of the series, but it’s also a retread of many outdated and familiar gameplay mechanics. Maybe some day, Gearbox will make an open-world thriller of a game based off exploration of LV-223 in Prometheus. But until that time, I believe that if nothing else, Aliens: Colonial Marines will at the very least be a decent franchise tie-in that continues the canon of the series.