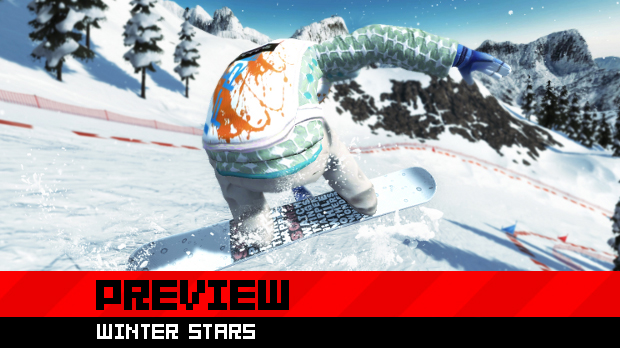 Were your aspirations towards professional athletics deftly crushed due to injury or ineptitude? Have you ever wanted to partake in the fanciful, snowy events that are popularized when the Winter Olympics roll around ever four years? Well, thanks to 49 Games’ upcoming Winter Stars, your dreams of hibernal glory can come true.

That’s right — you can be an off-the-couch-but-still-inside-where-it’s-warm Winter Champion. You might even burn a few calories with this motion peripheral-based title, so ready your Kinect, bust out your Move, or dust off your Balance Board. (I’d be even more impressed if you can play all three at once.)

Winter Stars, with its 11 different events, might come off as another disparate compilation of minigames, but the game tries to bring a bit more cohesion to the table. Events are unlocked by playing through the game’s story mode, which has some light narrative background. Each event features its own character and these characters compete for the same team. These cutscenes can be easily skipped and ignored, but it’s nice to see that the team has made an attempt to flesh out the game and the scenes seem mildly amusing — if anything, the voice acting and comic relief character (a Chinese reporter covering the games) seem like they could be worth a few grins.

The single-player also features some light upgrade elements. Doing well in an event or meeting some small goal, such as making a perfect turn in the bobsled, yields experience points that can be used to upgrade the characters’ abilities, as well as their gear and equipment. Playing through the single-player is also necessary to unlock all of the events, which will then become available to play at any time. The game also features various difficulty settings, including a “Family” mode, which simplifies the movements, making the game more accessible.

I played through two of the singe-player events, the bobsled and the biathlon, and went head to head in a downhill snowboard race in the local multiplayer. I played the 360 version of the game, using the Kinect, which is bound to produce a different experience than the other two versions of the game. That being said, the Kinect controls seemed fairly responsive, as subtle leans were able to appropriately change my direction, and they intuitively mimicked the actions I would expect in the respective events.

One of my favorite parts about the bobsled event was that it required you to reach your arm out and touch the side of the slalom to stabilize the sled. Unfortunately, the first person perspective precludes you from seeing your arms, so it also felt like I was blindly groping for a wall in a dark room, though there are onscreen indicators to inform you when your sled is stable or unstable.

The biathlon is an event that I didn’t even know was a thing prior to my time with Winter Stars. It’s a combination of cross-country skiing and rifle shooting. That’s right, your skiing character has a rifle strapped to her back and has to stop at marked points and shoot out some targets (killing fans in attendance is a penalty, I’m sure). This was my first time using a Kinect to shoot things and I was surprised that it was actually pretty neat. You point one arm outward like Ironman to aim the gun then bring your other arm, which is pointing upwards, down to shoot, bringing it back up to reload. Basically, Ironman making a crocodile mouth.

The snowboarding multiplayer mode was interesting. Despite having the least amount of flailing and other extraneous movements, it was the one I had the most trouble grasping. It was oddly reminiscent of those giant snowboarding arcade games with the built-in snowboard in that I could never grasp how to turn efficiently or pick up speed — I just impotently slid down the slope. Assuming I’m just awful at it, it seemed like it could be fun, and the team is working on adding Mario Kart-esque weapon pick-ups, which will hopefully lead to frustrated, physical living room violence in local multiplayer. The Xbox and Wii versions of the game will support two player local split-screen, while the PS3 version supports four player local, and all three versions support up to four players online.

Winter Stars isn’t going to be the next big thing in motion controlled gaming, but it was amusing enough playing with it for an hour after not having done any motion gaming in a while, and I was curious about how the other modes played. It was novel, in the same way those giant arcade machines have always been, but it looks like sufficient effort is being put forth to elevate the game above your typical motion-gaming or minigame cash in, so you don’t have to cringe when you see people picking it up off the racks. I suppose there is also contingent of avid winter sports fans that need their excitement for the sports sated, especially in the off years. Plus, the development team is German, and you know the Germans make good stuff.