To me, the original inFAMOUS featured an almost ideal sandbox game world. Running around with such explosive, limitless power made me feel like I could do anything in the game, and that felt pretty great. But now I know that this was only the beginning. Imagine having the tools to create your own missions to play through in this world. Imagine being the hero of your own missions. The new user-generated content ability in inFAMOUS 2 lets you create just about anything you can imagine, and then share it, making this sandbox a whole lot more fun to play in.

At a inFAMOUS 2 media event last night I got to try out a few examples of user-created content. I also made an attempt to put some of my own ideas for a mission together. 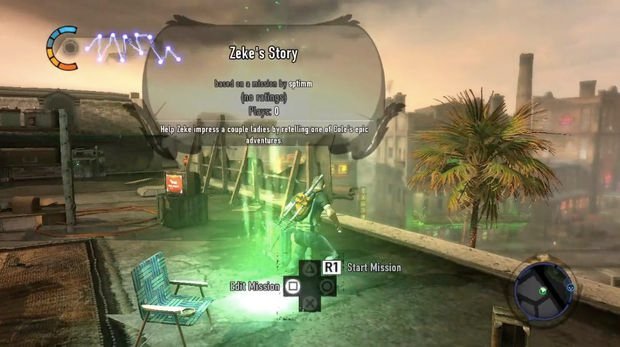 My favorite demo mission made creative use of prompts and text, rather than your standard “beat 10 baddies to proceed” type of mission. In this one, Cole meets two ladies on a rooftop. His goal is to impress these females with a grand tale of his conquests as a hero as Cole and his pal Zeke create this story as they go along. What’s fun is that the made up bits play out before Cole as they talk to the girls, putting him in some hairy (and funny) situations.

As the tall tale grows taller, Cole finds himself in some pretty rough spots. In one part, while he’s out to save a damsel in distress, a dozen heavy gunners appear out of nowhere. As the (fake) story goes, Cole takes them all out out once, which means that Cole really does have to take them out all at once! Later, snipers pop out of nowhere while bailing out another helpless person strapped to some bombs. The string of BS that the two are feeding these ladies has Cole running all over the city, doing ridiculous things just so he can say he did them. 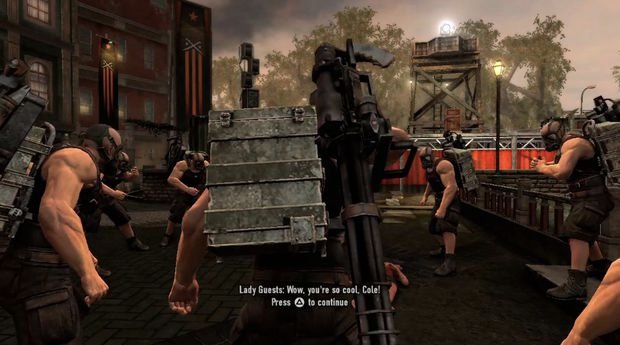 Another demo was a play on the classic game Space Invaders. Called inVaders (get it?), this one had Cole blasting shots into the air over the city to take down a grid wave of invaders before they could land. And just like the classic game, these invaders gradually increased the speed of their back-and-forth decent. The creator even managed to work in a good stand-in for a UFO fly-by, just like in the classic. This was a short, one-wave demo, but I was told that a full mission could work out to be much longer. I asked how long it would take to put a mission like this together with the creation tools and was told that it would only take a couple of hours for someone with a bit of experience.

For creative types, the tools supplied for user-generated content are like a game on their own. You can go nuts modifying and dropping in objects to create just about anything you can think up. The logic system lets you take your designs and make a real game out of them. Being visual, you can see how logic nodes connect to take your ideas into and make them real mission functions. You’ll set triggers and conditions for these modes, and you’ll have the ability to make missions of a very high level of complexity.

My time with the creation system wasn’t enough to get past the initial learning curve, but I was able to see what a well-versed creator could do with the same tools. I watched as a Sucker Punch staff member took my idea of a sort of disc toss-ish game where Cole would have to throw cars through a series of goals to proceed through a sort of course and make a working demo in only a few minutes. The logic looked fairly simple when he showed it to me, but it was encouraging to see how little work was required to make a fun mission. 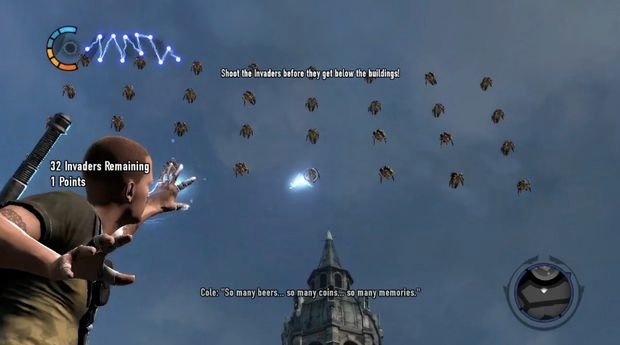 Several templates for mission design are included in the creation tools, which is great for those that can’t wrap their head completely around the logic required. You’re also free to start work on a mission, upload it, and let someone with a better grasp of the system finish it up.

It seems that Sucker Punch has gone out of their way to let you add whatever you desire to their new baby, letting you share in the fun. The beauty in this is that we’ll end up with a single-player game that never really ends as there will always be fresh content created by gamers to try out.

What’s encouraging is that inFAMOUS 2 seems to invite creativity. It truly welcomes creators. Take a powerful character like Cole, stick him in a huge, varied world, and then add in tools for players to create their own missions and you have the gift that keeps on giving. I think gamers are going to have a lot of fun with this.

Filed under... #Destructoid on assignment#inFamous