Upon first playing Rochard, some immediate impressions come to mind. The art style of the game is very reminiscent of Team Fortress 2, using a similar bold and simple color pallet and cartoonish characters that seem to carry themselves with the same kind of heft as the characters from the famed team-based shooter. The mechanics call to mind Half-Life 2 with a device that works quite similarly to the gravity gun. Even the general format of the game is a hearkening back to other “2.5D” games released on the PlayStation Network and Xbox Live Arcade, most notably Shadow Complex.

Yet what makes Rochard stand out is exactly how it incorporates these elements with a fine level of polish, while simultaneously adding some new twists to well-tread formulas. 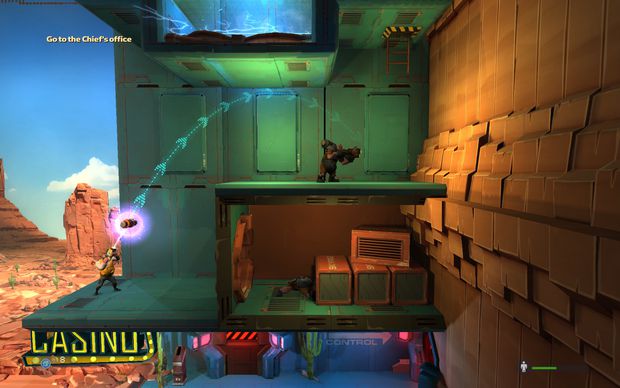 The story begins with your hefty hero, astro-miner John Rochard (voiced by John St. John) narrating as he explains how the trouble he’s in all began. I won’t go too much into story detail as I certainly wouldn’t want to ruin it but I will say that it involves your plucky blue collar gravity-manipulating hero involving himself in something about alien artifacts, space pirates, and plot twists rife with betrayal and sabotage.

The first half of the beginning chapter of the game serves as a tutorial of sorts, guiding the player’s hand through the game mechanics that are gradually introduced. Even at these early parts of the game, Rochard’s vibrant character shines through. Much of the first chapter of the game involves banter between John and his fellow miner Skyler as she carries the plot along or goads the player into figuring out puzzle sequences. 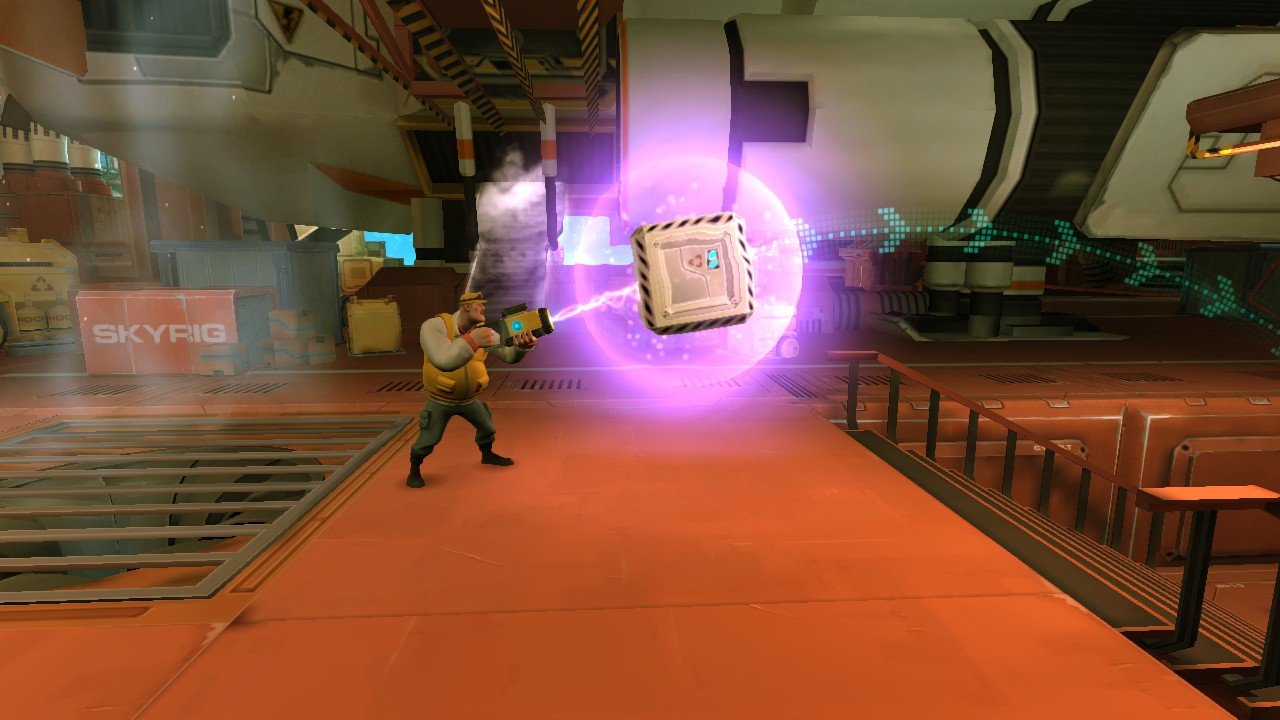 The primary item of use that the character gets is the G-Lifter, a sort of gravity gun that first allows you to manipulate objects such as crates and movable platforms in order to solve relatively simple puzzles to progress. While you’re holding onto an object with your G-lifter, the object is encased in a protective gravity bubble that serves as a shield and even deflects bullets back at enemies when held at the correct angle. It’s a pretty neat defensive strategy, but the most fun comes from simply lobbing large objects at your enemies a la Half-Life 2, and Rochard never lacks the endless supply of large crates, explosive canisters, and other items to lob at enemies in various strategic ways.

Throughout the game, Rochard comes across upgrade stations that add a new twist to what his G-lifter can do. One of the first new tricks you discover and one of the primary new mechanics of the game is the complete manipulation of the gravity around you, so that you can jump and float at will in order to reach areas that may be otherwise too high or too far out. Once this mechanic is introduced, it can be tricky to remind yourself to implement it at the right time. Or perhaps it was just that I had issues as I had to make repeated attempts to jump from insane heights without low gravity switched on.

I was told that upgrades you’ll find may relate to more active abilities such as new powers for your G-Lifter, or to passive abilities such as upgrading your health and regenerative powers. Throughout my session with the game, I was treated to more active upgrades and each one added more ways to solve puzzles and gave interesting new twists to combat. One of my favorite examples of these upgrades actually came in the second chapter, which takes place in a refreshing change of atmosphere, a sort of space casino with all of the neon and noise expected of such an environment. 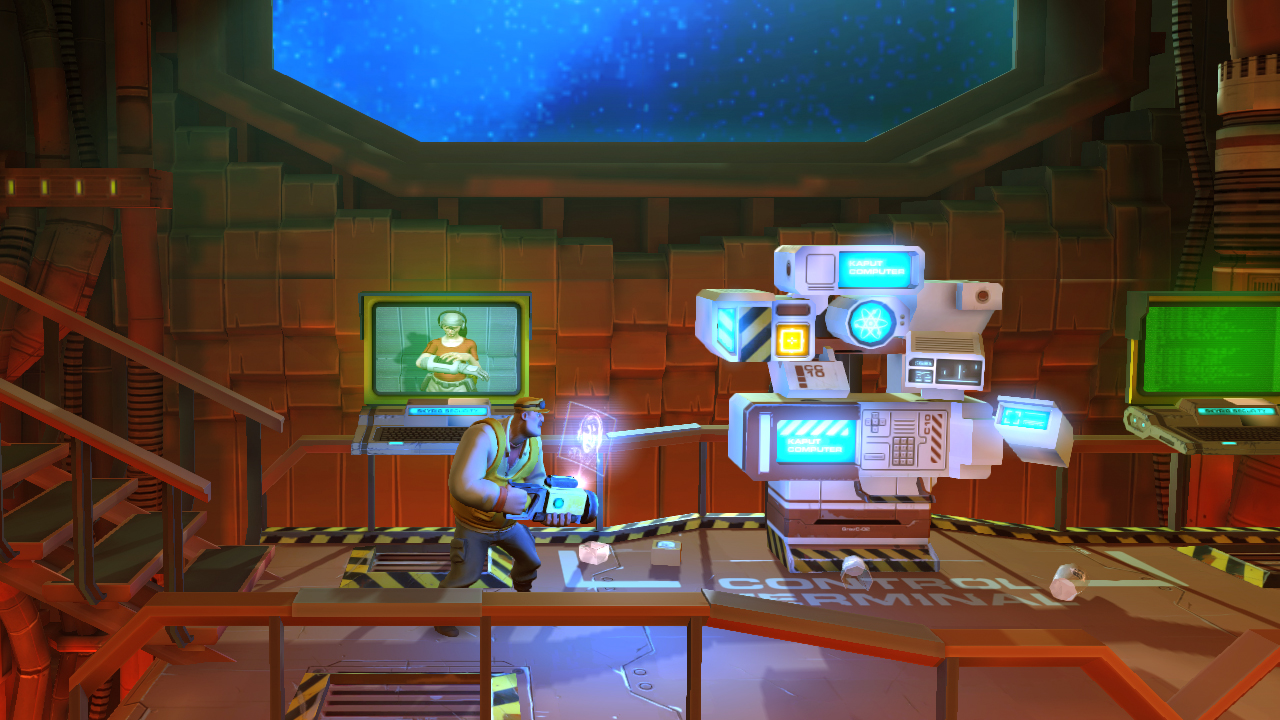 At a point near the end of my session with the game, I was finally able to grab turrets with my G-lifter and throw them at enemies or even use them to help solve puzzles. I really appreciated this new upgrade as throughout the earlier parts of the game a turret often meant I could either run like hell or expect a pretty quick death. Being granted with this new ability gave me a feeling of power sort of akin to the gravity gun in the final hours of Half-Life 2. Though by the time I got the upgrade, I had so many other abilities that I began to forget that I could even use this new one. I found myself using other strategies to destroy the turrets before remembering I could simply grab them and throw them off into electrical fields.

Beyond the upgrades to your G-Lifter, Rochard also shines when it comes to puzzle-solving. It has that unique “one-more-time” ability that causes you to attempt a scenario despite your frustration simply because you know the goal is attainable and just within your grasp. And if you’re feeling especially clever, most puzzles have an added wrinkle that end in successfully finding a Trophy collectible that presumably adds up to new Trophies.

Overall, I came away impressed with the game mechanics and the light and sometimes humorous dialogue of Rochard. A part near the middle of the second chapter actually had me laugh aloud, as a sort of Native American character gave some cheeky dialogue about losing an important game item due to gambling. It was especially funny as the character was already portraying a stereotypical “Indian” by going into a metaphysical tirade about how the item was within us all. Or something. Until he admitted of course, he simply lost it. 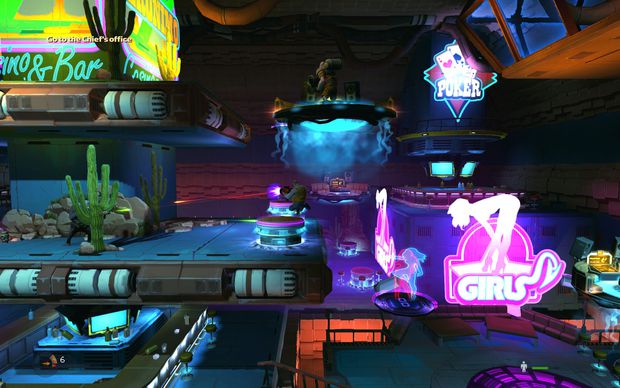 Unofficially, the price of Rochard won’t hurt your wallet at all (so not around the $15.00 price range) and will provide the average player with eight to ten hours of gameplay. It may take some gamers much longer as the puzzles ramp up and really take knowledge of physics and combat strategy. I was told that Rochard will feature a total of five chapters, and from the chapter and a half or so that I got to play I could tell the game would be a relatively lengthy and diverse experience, with multiple ways to solve puzzle and combat scenarios.

The date for Rochard‘s release is currently set at an ambiguous “Summer 2011.” I know that I’ll be booting up my lonely PlayStation 3 to log into the PlayStation Network for this game though, as the end of my playthrough just left me wanting to know what new puzzles and storyline elements would be revealed next.