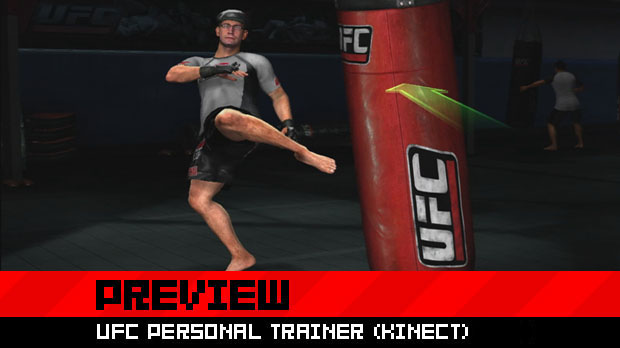 I’m not even going to pretend like I watch UFC. There’s just something about the act of punching a guy’s teeth in and then kneeing him in the face until he chokes on his own blood that leaves me feeling a little uneasy. That said, it’s a well loved display of showmanship and I can’t discount the entertainment it provides to millions of people across the world.

UFC Personal Trainer is the newest Kinect fitness game that takes a look behind the flash and spectacle of ultimate fighting to the demanding and strenuous MMA training all UFC fighters go through. The result is a hardcore fitness game that its creators think will be beneficial to just about everyone. The downside? You probably won’t learn how to cagefight. 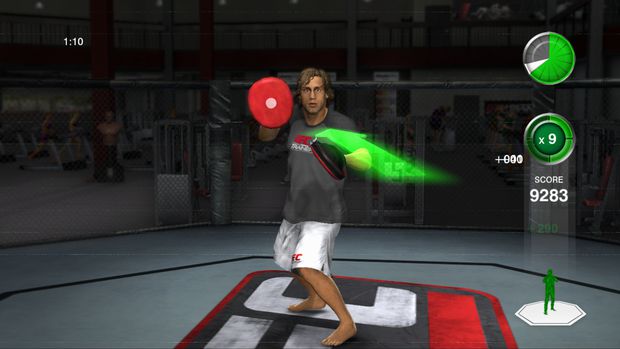 Fitness-oriented games have pretty much dominated the Kinect console since its release last year, but the majority seem to have placed more emphasis on entertainment value than actual fitness. THQ’s previous weight loss title, The Biggest Loser, received generally positive reviews but was noted for containing a lot of “fluff” that tied into the television show. UFC Personal Trainer aims to rise above the rest and ultimately become Kinect’s most hardcore fitness game. UFC just happens to be a great medium through which to provide this experience, since UFC fighters partake in one of the most rigorous training regimens out there.

Although Heavy Iron developed the game, all of the exercises and routines were designed by The National Academy of Sports Medicine (NASM) in conjunction with Greg Jackson, Mark DellaGrotte, and Javier Mendez, three leading MMA experts. The workouts in the game were designed to closely mimic those used by actual MMA athletes, so players can expect to do exercises from a wide variety of disciplines including boxing, Muay Thai, kickboxing, and wrestling, to name a few.

One aspect that sets this apart from other fitness games is the ability to create a customized workout routine. The developers wanted players of any skill level to be able to play, so in addition to three difficulty settings, you can also adjust your workout time (routines range from about 15 – 45 minutes) and create specific fitness objectives for yourself. Based on your objectives, the game will choose up to 12 from a pool of 71 MMA and NASM-approved exercises to determine which ones are best suited for your goals. If you’re looking for even more of a challenge, the game also supports the use of free weights and weighted wristpads or anklepads. 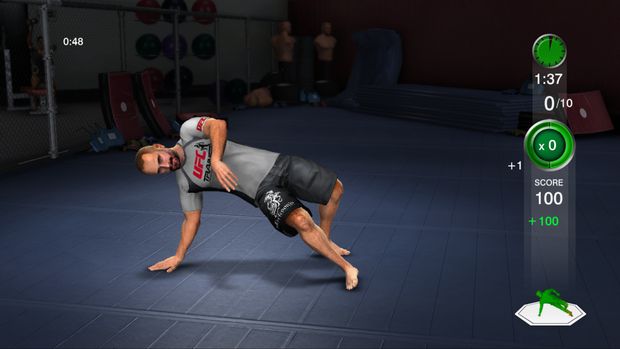 Fans of UFC will undoubtedly recognize several of the faces in this game, as it features appearances from 15 famous UFC fighters. Players choose one of three trainers (Jackson, DellaGrotte, or Mendez) whose job it is to show you how to perform the exercises correctly, encourage and motivate you while you’re doing them, and alert you if you’re doing them incorrectly by showing you the proper method.

The game also moves at your pace, so if you find yourself needing to rest mid-exercise, the trainer will temporarily stop until you’re ready to resume, all the while encouraging you to continue. MMA trainer Greg Jackson, who is one of the three trainers you can pick from, actually demoed the game for me. I’ll admit it was somewhat surreal watching the real Greg Jackson receive orders from a 2-dimensional version of himself. I can now safely mark that down as something I never thought I’d see in my life.

Anyway, just about everyone who’s tried to lose weight knows that one of the hardest parts is maintaining a regular exercise routine. UFC Personal Trainer knows this, too, so for players who have a hard time keeping up with long-term fitness goals, the game offers a calendar to track your workouts and provide recommendations based on your progress. The game also has a leaderboard, which seems silly but could actually be useful if you have a support group or a friend who is also trying to get in shape. 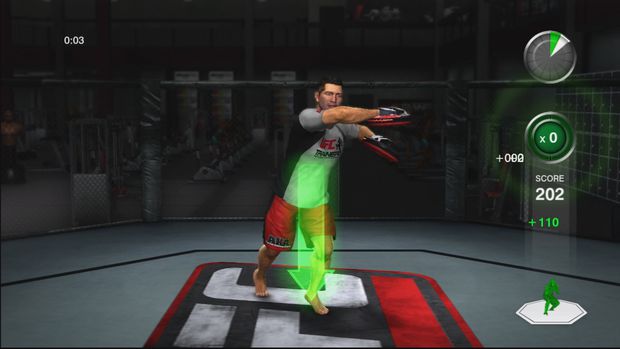 THQ will also be releasing this title for the PlayStation Move and Nintendo Wii, but Kinect users will get a few perks. For one, UFC Personal Trainer will be one of the first Kinect titles to incorporate voice recognition, so players won’t have to mess with annoying Kinect menu navigation. The Kinect version will also boast nine exclusive exercises and appearances from four extra UFC fighters.

All in all, I really think the training program in UFC Personal Trainer would be a success for anyone who manages to keep up with it. I’d also encourage women not to shy away based on the name alone, since the exercises are suited for everybody, not just men. My only recommendation would be to use a padded mat – at the very least, a yoga mat – if you’re doing exercises on the floor. Trust me on that one.