Sega and The Creative Assembly have ranged pretty far in developing the Total War franchise. They’ve gone from the battlefields of ancient Rome to the Medieval period to the beginnings of the Industrial Revolution in covering how both never and always changes.

This time though, they’re returning to their roots, to the period that they first visited in Shogun: Total War: The Sengoku Jidai, Japan’s “Warring States” era.

What sorts of lessons have The Creative Assembly brought on their return to the Land of the Rising Sun? I got a chance to try the game’s campaign and see for myself. 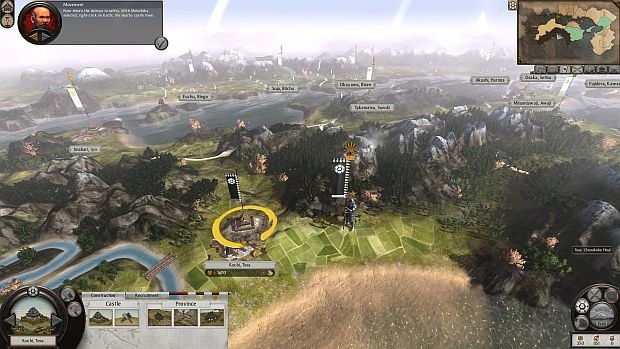 For the purposes of the preview I was given a pre-beta build of Shogun 2, which had the game’s first tutorial campaign unlocked, as well as the option to play a standalone “historical battle” based on real historical events.

The campaign placed me in the sandals of Motochika Chosokabe, lord of Tosa province, located in Shikoku, one of Japan’s four main islands.

Shogun 2 impresses straight out of the gate with its visuals. Even on the campaign map, all of the interface elements are stylized to mimic traditional Japanese brush paintings of ukiyo-e woodblock prints. The map itself blends 2D and 3D elements. While territories I had explored were displayed in the usual rich detail, unknown portions of the map remained in two dimensions, represented as a flat, ink-on-paper outline with the province’s name stylishly painted in.

The game ran well on my Radeon 5850-equipped PC, which exceeds the game’s “recommended” system requirements by a fairly small margin. I only saw major hiccups when I turned up the draw and detail distance to the maximum level, and even then it all looked quite lovely. 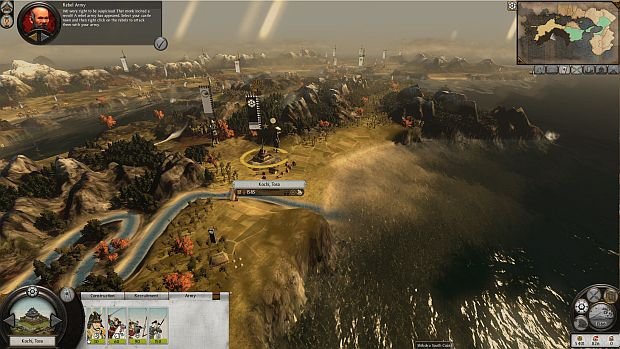 The first few turns were guided mostly by the tutorial adviser, speaking with a cheesy-but-inoffensive Japanese accent. Each turn represents a season, and the map’s appearance changes appropriately. Turns in spring feature pretty cherry trees in full bloom, while autumn turns show red leaves drifting off the foliage.

Total War veterans will find Shogun 2‘s basic process familiar. Provinces are controlled from their main towns, whose public order is influenced by various factors, including army presence, religious alignment (some peasants don’t appreciate it when their conquerors worship a different set of gods) and the ever-important tax burden. Most of it is controlled from a series of convenient sliders on the town’s information sheet. All this information is easily available from an in-game encyclopedia which contains detailed descriptions of most of the game’s units, buildings, and features. It helps a lot when you’re trying to figure out how a “yari ashigaru” is different from a “yari samurai”.

One significant new addition is the “Arts” panel, a screen that functions as a global tech tree that governs access to new buildings and benefits. For example, unlocking the famous polearm-wielding warrior monks requires that a town build a Buddhist monastery, which in turn calls for certain arts to be mastered, which takes time. Mastered arts also confer various benefits in both campaign gameplay and real-time battle, such as improving a province’s economic output or upgrading the health and morale of a general’s bodyguard units when the time comes to draw steel. 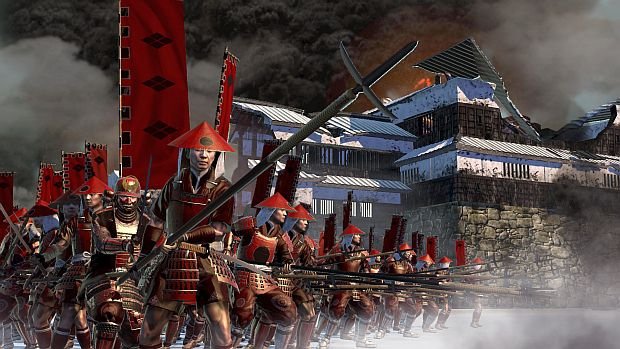 The campaign itself was relatively short by turn-based strategy standards. It only required that I control ten provinces along with those of my immediate rival, the Miyoshi clan. In the time I had, though, I noticed that the game’s campaign and faction AI behaved more aggressively and reacted more realistically to my actions.

For example, the Miyoshi more intelligently consolidated and split its armies as I took territory after territory, rather than simply sending smaller units at me piecemeal. At one point I had their main castle under siege, thinking that I outnumbered their men two-to-one, when another army of the same size as the one in the castle attacked my forces from behind, led by the Miyoshi ruler’s son. That surprise action turned what would have been a blowout into a narrow victory.

And in the meantime, rulers from other factions, the ones I wasn’t at war with, began acting increasingly uncomfortable at my all-conquering ways. The Tsuitsui to the east began sending ninjas into my territories to mess up my castles and assassinate my generals, and another faction to the west started raiding my outlying provinces’ key resources (now represented by a selectable building within the area’s borders), lowering their economy and angering the populace until I could spend money and time repairing the damage.

Luckily, I had a few ninja and ninja-hunting metsuke units of my own, which had gained much experience taking down the cowardly Miyoshi dogs. This new, RPG-like system rewards players (read: me) who keep their agents alive with points to add to various skill trees, conferring benefits and special abilities to make the agent (or general) more able. It allows for a degree of specialization that makes agents feel unique and valuable. 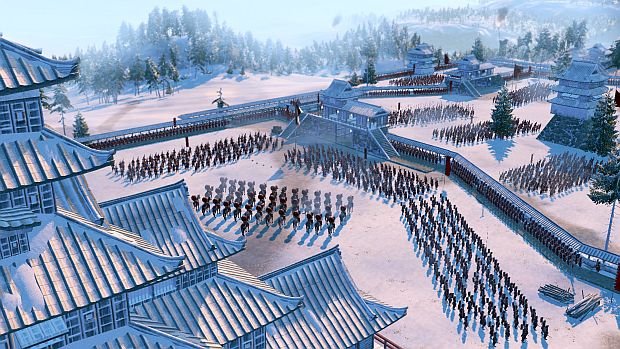 Following my glorious conquest of the Miyoshi I booted up the game’s historical scenario mode, which is a real-time engagement pre-arranged to match the conditions set by the actual event it was based on. The one available to me was the Battle of Sekigahara, arguably to be the most important battle in samurai history. Tokugawa Ieyasu’s victory at Sekigahara cleared the way for his clan to unite the country under the rule of – you guessed it – the shogun, kicking off a period of stability that would last almost 300 years.

Seemingly for kicks, this battle placed me on the side of Mitsunari Ishida, who actually lost the battle, to see if I could end up changing history. I failed to do so, and quite badly at that.

My ignominious defeat came thanks to a trifecta of factors, including historically accurate betrayal by one of my allies, the historically accurate inaction from my other allies, and legendary stupidity on my part, since I had forgotten that this was a Total War game, and that I should have been controlling my whole army, rather than sitting around admiring how pretty the character models looked when they “paired off” with enemy units to engage in animated dueling. They weren’t just masses of polygons hacking at air anymore.

With lessons from that dishonor behind me, I was in a better position to see what the computer could do against a guy who actually remembered to fight. And it performed quite well, managing to sneak spear units into my left flank by marching them through a mountain forest while I was busy fending off the traitorous Kobayakawa army. It also at maneuvering cavalry units around my screening samurai to get at my archers, which only narrowly survived after I sent them fleeing uphill into a thick forest. 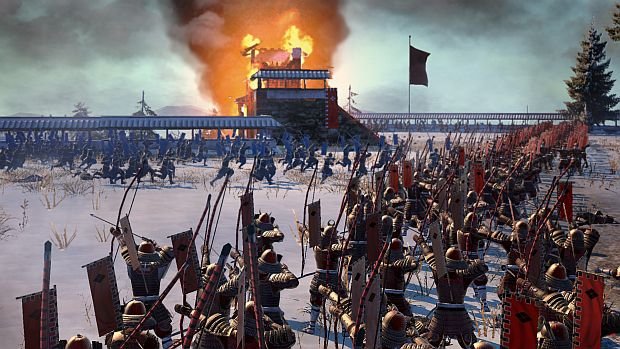 Despite the AI’s tactics, I won in the end, though I did so barely by the skin of my teeth.  To that I credit to the changes made that render generals and other “heroic” units much more significant on the field than before. They can bolster the morale of nearby troops by their presence alone, keeping them from routing in the face of enemy spears, and even inspiring to do more than they’d otherwise be capable of doing. In my case, I used Mitsunari’s “Stand And Fight!” ability, causing personal bodyguard unit to dismount and assume a very strong “last stand” style of defense, with Mitsunari himself sitting majestically on a camp stool in the middle.

That proved key to my narrow victory, as it delayed the enemy troops long enough for me to conduct a desperate charge by my remaining horsemen and archers (who resorted to swords for lack of ammunition) that took the Tokugawa leader’s head, demoralizing what remained of their army enough for my last spear unit (which I had cleverly tucked away in a forest) to clear up.

As far as I’ve seen, Shogun 2 provides a very true Total War experience, and does good justice to its setting. I saw the glorious rise of the Chosokabe, and managed to change the next three centuries of Japanese history by leading Ishida to victory. I can’t wait to see what I’ll get to do in the final version of the game when it hits this March.

That said, if I were to make a suggestion to The Creative Assembly, it would be nice to know what the various group formations actually do before I choose them. It’s very poetic and all, but I think I’ll need to know a little earlier if the “Crane” or “Tiger” put my bowmen straight in the path of a cavalry charge.