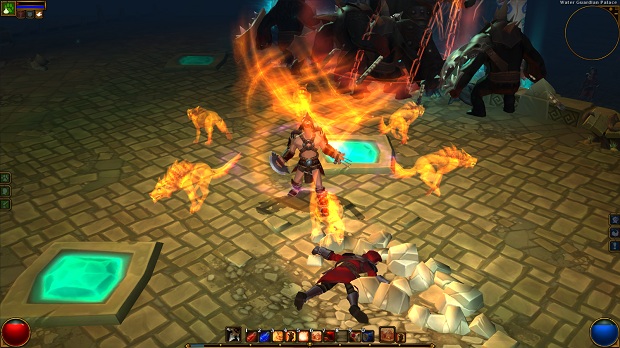 By now, I’m sure many of you are already familiar with Torchlight, the inaugural opus of developer Runic Games. It was a class-based action RPG/dungeon-crawler that bears an uncanny resemblance to a hypothetical hybrid of Diablo and Gauntlet.

I played Torchlight 2 for about an hour at PAX 2011, experimenting with the Outlander (a lithe rogue-esque class) and the Embermage (a ranged magic class) in the game’s second major area. The overworld is randomly generated using large pre-made chunks. So while a landmark might be in a different place with each playthrough, the landmark itself will be the same.

Those familiar with the first title in the series will have no trouble with the new content. This really just is Torchlight with tighter graphics a MUCH bigger world, spells, items, talents, and content. And that’s definitely not a bad thing.

I started my playtime with the Outlander, having a natural inclination for rogues. I had access to about a dozen different abilities that had some nice variation and gorgeous animations. Within a few minutes, I set off to challenge a boss in the area and had relatively little trouble. I don’t know what difficulty I was on, but I could see the game being a bit too easy, especially if baddies don’t scale with the number of players. The Embermage was fairly intuitive as well, and I had a lot of fun with rudimentary adventuring.

A lot of work has gone into making sure Torchlight 2 has replayability. When your characters hit the level cap (I was told to expect it to be around 50), they can confer buffs and perks to new characters. There’s a match-making system, full modding support, and suite of other features to to ensure you get your money’s worth, all for the paltry sum of $20.

Torchlight 2 is due out later this year. If you haven’t played the first one, it’s $15 on Steam, and it’s really good, especially if you like dungeon crawlers.