Let’s make this perfectly clear — this game is called TMNT. That’s right; you pronounce it “Tee Emm Enn Tee.” Not “Tehment,” “Tuhmunt,” and whatever you do, certainly don’t refer to it as “Teenage Mutant Ninja Turtles.” Because that’s so last-gen and even more early-90s.

Ubisoft’s new action title (based off of the new CG film, TMNT) is set to be released later this month for just about every platform but the PlayStation 3 (owners are no doubt crying themselves to sleep at night over the loss). I had a chance to spend some time with the Xbox 360 version of the game at this year’s New York Comic Con and despite my previous misgivings, walked away pleasantly surprised. 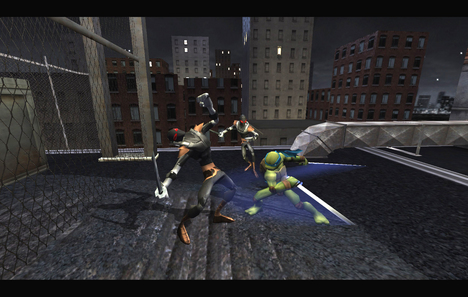 As nasty as the game came across in earlier screen shots, don’t be fooled. While the game isn’t going to win any Spike TV awards for visuals (uh … actually, knowing those guys, it might), it runs off a modified version of the JADE engine used in Ubisoft’s popular Prince of Persia games. So right off the bat, the next-gen version is a bit gimped, but the team was nice enough to bump the resolution and throw in a few fancy lighting effects here and there. The end result, along with the impressive JADE engine animation seen in the PoP games, is a title that looks a hell of a lot better in action than it comes across in screenshots.

Along with the JADE engine comes gameplay elements that vaguely resemble that found in Prince of Persia. As ninjas (and talented turtles, I suppose), our heroes can flip, climb, shimmy, swing, and wall jump with the best of them. Performing acrobatics with the turtles was a breeze, but without the wall scaling “puzzles,” felt more like Mortal Kombat: Shaolin Monks than Sands of Time. That is to say, you traverse environments only to find another area of thugs to pummel.

The actual pummeling was a tad on the simplistic side. With one main attack button that seemed to control all of the combat, punishing thugs was easy, but relatively boring. Compared to the acrobatics, it felt shallow, stilted, and forced. I love pounding the crap out of things as much as the next guy, but I also prefer a deeper and more flexible fighting system.

I was given the option to swap between turtles on the fly, but it was hard to discern any control or ability differences between the party dude and the mutant who does machines. Other than animations and occasional wisecracks, they all seemed quite similar to one another. Team attacks and a few one button specials mix things up a bit, but mashing away seemed to be the way of the warrior in TMNT. 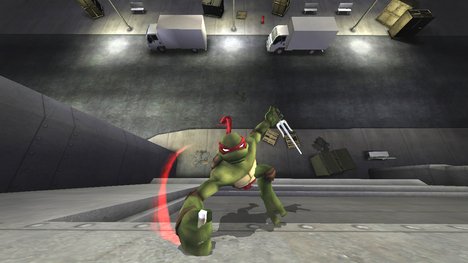 For some strange reason, the game does not support multiplayer. Four turtles, one player. I realize that it would have been difficult to implement such a next-generation feature, and I’m sure there’s a perfectly logical explaination for it’s absence. Still, the right combination of liquor and friends could have made this game a must have for fans of beat ’em ups, ninjas, and reptiles.