When we left off, Deus Ex: Human Revolution main protagonist Adam Jensen got his ass royally handed to him while trying to protect Dr. Megan Reed, who had discovered the key to human augmentation. Six months later, Adam is back on the scene with his newly augmented body.

Adam is pulled back into duty by the president of Sarif Industries, David Sarif, as another situation has arisen that threatens his employer. What I previewed last time was just a small taste of what is promising to be a truly immersive experience. 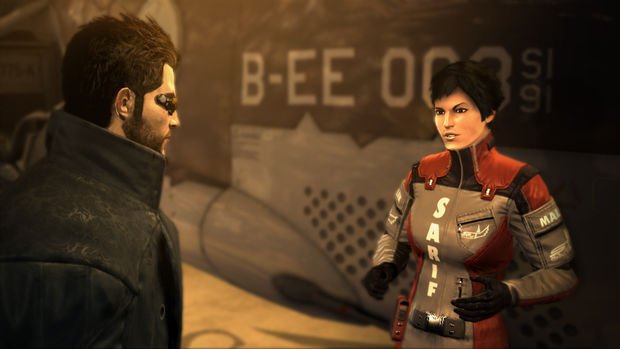 Before getting into the actual gameplay, I want to briefly touch on the intro cinematic. It’s a beautiful sequence that shows bits and pieces of Adam Jensen’s transformation into an augmented soldier and it actually sent a chill down my spine — if only because it reminded me a lot of the intro to the Ghost in the Shell anime (link NSFW). I’ve been fascinated with the field of cybernetics ever since I saw Mamoru Oshii’s film all those years ago and thought Human Revolution’s intro was a lovely nod.

It’s not easy for companies that specialize in the most important revolution in human society. Not only do they have to worry about rival organizations, but there are also human groups that oppose humanity’s perversion against god or nature. One of these “Purists” groups have attacked a manufacturing plant owned by Sarif Industries where they’ve taken hostages. David Sarif’s company has suffered enough already, and asks Adam to go in and resolve the situation.

Upon landing at the facility where the crisis is taking place, I’m given the chance to pick what augmentations (augs for short) I can put into Adam. All of the augs you can equip/use are visible from the start, but you have to earn XP in order for Adam to upgrade.

Jonathan Jacques-Belletete, art director on the project, explained that not every aug is working from the start since Adam’s flesh and brain aren’t fully compatible yet. Jonathan likened it to that of a baby where they learn to speak and walk as they develop. As you gain XP, though — from killing or not killing people, sneaking into places, finishing quests, etc — you’ll unlock Praxis points which go toward unlocking augmentations (Praxis points can also be found in the world.) A new aug requires two Praxis points, while upgrades to unlocked augs will cost only one point. 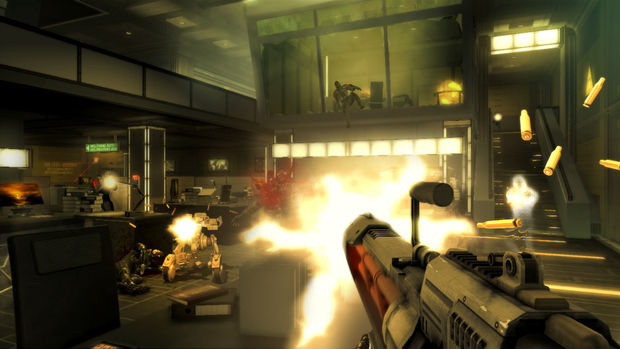 I went ahead and chose the cloaking system, aim stabilizer, and the Typhon Explosive System which launches miniature grenades in a 360 degree ark. Once unlocked, these abilities are attached to the D-pad on controllers (which I i figured out after I triggered the Typhon system on accident) and upgrading the abilities usually makes the feature more efficient in some way (speed, duration, power, etc). Using these special attacks — which include the special lethal close quarter kills — requires one full slot of your battery meter. You’ll always have one battery slot that will be full (it takes a bit to recharge) and extra batteries will need to be replenished with items.

All of the upgrades are based around the four core mechanics of Human Revolution: combat, stealth, hacking, and social. Everything in the game is designed with those four concepts in mind. It’s up to the player to decide how they will upgrade Adam. A killing machine, a smooth talker or even a jack-of-all-trades who specializes in a little of everything — the choice is yours.

Once I was set, I went into the building and questioned the police who were standing guard around the perimeter. They weren’t happy they were being held back by David Sarif, but they did at least help out by providing intel on the hostages, the Purist group, and the two ways of entering the building.

Before arriving at the scene, David Sarif gave me the option of going in lethal or non-lethal. I went with lethal and was given a weapon, but I wanted to go through the level without getting into too many conflicts. As I made my way toward the front entrance, I came across a lone guard patrolling the area. Once his back was turned to me, I went up behind him and was given the option to perform a lethal or non-lethal kill with a simple press of the button.

I went with non-lethal and an animated scene took place with Adam knocking the guard out. I dragged his unconscious body to a hiding spot but during this process, another guard came upon me and opened fire, alerting several other guards protecting the front entrance. 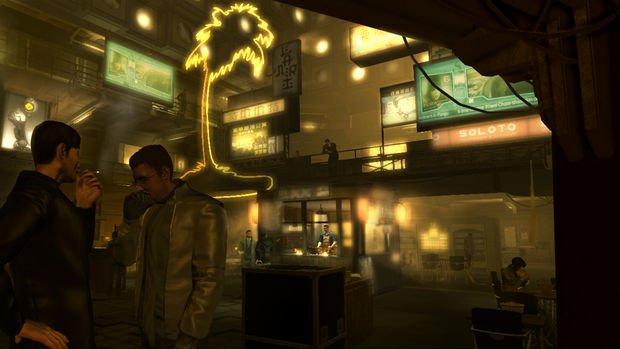 There was only one path for the guards to get to me, so a few of them slowly came in one-by-one and I was able to take them out with relative ease. For the rest, I made use of the cover mechanics (described in the last preview) and cleared the area. This was a situation I noticed a number of times during my playthrough. If the guards were forced into taking one path toward you, it was somewhat easy to kill them. It’s when the bad guys can come at you in any direction that proved to be difficult. Half the time, they used actual tactics against me; other times, they were stupid and simply rushed in.

After several attempts of trying to get in through the front entrance of the building, I finally decided to use the roof access instead. I was getting my ass handed to me playing this game “FPS style” so I did my best to sneak around instead. Even then, I still came across situations where I got into firefights and even when they would funnel toward me, I died a lot. The game is very realistic in that only a few bullets will take you or the enemy out. Plus, you’re not afforded that many bullets.

As for the weapons system, you’re given a few options of managing your inventory. Pressing Back on the Xbox 360 controller will bring up your menu where among other things, you can access your Resident Evil 4-like inventory management screen. You can also hot swap between two guns with a simple button press and there’s a quick-select screen which pauses the action and pulls up a radial menu with all the items you can equip.

I eventually made my way to the end of the section, where I confront the leader of the Purist group, Sanders. He was holding a hostage at gunpoint and I was given the option to use force, or try to talk him out of killing the hostage. I wasn’t having luck with the weapons before so I went with the peaceful route. I used a variety of methods to try and talk Sanders down; eventually, Sanders let the hostage go, but in the process, a deal allowing Sanders to escape was made.

I was happy that I managed to save the hostage, but shortly realized I missed a room somewhere along the line that held more hostages … and they were all killed. Whoops! I may have resolved the crisis, but I still let some innocent bystanders die, which was reflected in the conversation I had before leaving the manufacturing plant. 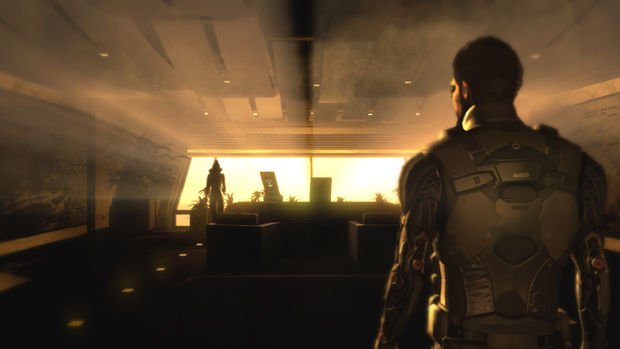 It’s been a long time since a first-person shooter has presented me with such a challenge that I die over and over. That’s the beauty of the Deus Ex series, as it’s a role-playing game hiding in a first-person shell. I had to re-wire my play style in order to adapt to the freeing, open-ended experience. I’m interested in seeing just how different I’ll be able to play through this game.

I won’t necessarily do multiple playthroughs, since it’s a good 25 to 35 hours, but I will at least experiment from mission to mission. And I know I won’t have the patience to attempt a no-kill run, but it’s nice that the option is there. That open-ended nature also applies to the multiple endings, and it won’t simply be a matter of good, bad, or neutral; there will be morally “gray” endings as well.

After all was said and done, I had to put the controller down. A shame — the next level is when Human Revolution truly opens up into a non-linear experience. You’ll be able to explore the city, get side-quests from NPCs, and really dive in to the Deus Ex universe. I’ve never played the Deus Ex series proper before, so I’m looking forward to really getting that chance come later this year.