Bulletstorm has been on my radar since it was revealed way back in May. People Can Fly’s over-the-top shooter was promising to be an epic experience, and a breath of fresh air in a market full of super-serious shooters.

The “Burnout of shooters” is coming out at the end of this month, so I was given one last look at the game before release. I like Bulletstorm, and I know I’m going to play the hell out of the Horde-like “Anarchy” mode. However, I’m not all that thrilled with the single-player campaign after my extended hands-on. 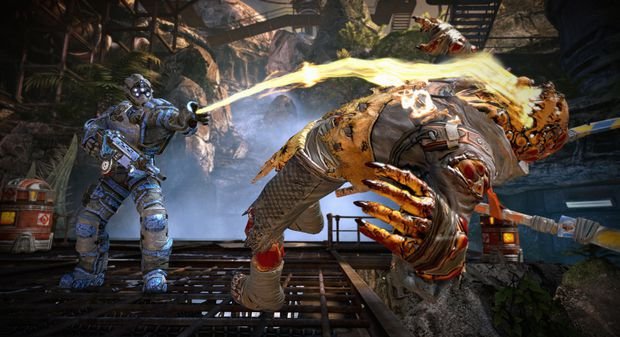 Bulletstorm begins with a tutorial section that sees main character Grayson Hunt terrorizing a prisoner while drunk off his ass. During Grayson’s violent interrogation, the player learns how to aim and shoot by targeting a bottle taped to an assassin’s head, and finishes with the guy getting kicked into an airlock and launched into space.

After the tutorial, Grayson’s spaceship comes across the Confederation’s ultimate spaceship, the Ulysses. Grayson and his team used to work for the Confederation until he discovered they were being used to kill innocents. 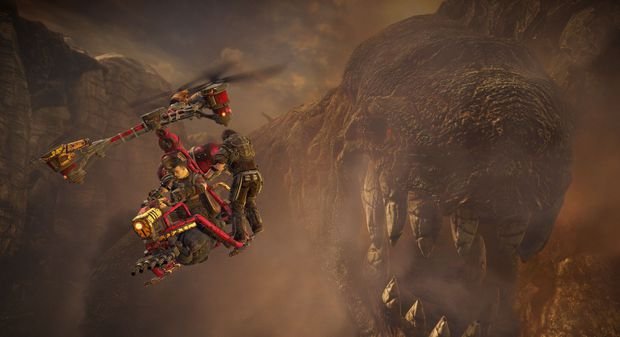 Grayson has had it out for the Confederation ever since, and sees this chance encounter as the perfect opportunity to get his revenge. The two ships attack one another, causing them to crash onto a nearby planet. Once Grayson recovers, it’s on to the real game of killing your enemies in the most creative way possible.

At first, the story feels forced; it’s trying to shove a lot at you all at once. But the longer I played, the more I was getting sucked into the Bulletstorm fiction. I found myself actually caring about the characters, and a large part of that has to do with the brilliant voice work by Steve Blum (Grayson Hunt) and Jennifer Hale (Thrishka Novak.) This is some of Steve’s best work (up there with Cowboy Bebop), and hearing Jennifer Hale perform her role with a cocky, badass attitude was a real pleasure.

Bulletstorm is also extremely hilarious; there were plenty of times that it actually had me laughing out loud. It helps that my humor is immature as fuck, so the game aligns perfectly with the type of comedy I enjoy. 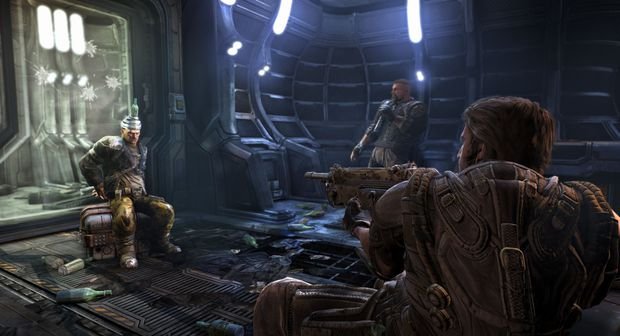 As for the core gameplay, it’s fun to a point. The mechanic of scoring points by doing over-the-top crazy stuff with your weapons is entertaining, but by hour three I was getting bored with the concept. If it wasn’t for the fact that you can only buy new weapons and ammo by gaining skillshot points, then I would have gladly just played through Bulletstorm killing enemies the standard way in order to progress through the story. The whole killing-for-points thing is better suited to “Echoes” mode, the score-attack version of single-player, and “Anarchy” mode, the four-player co-op “horde” mode.

I also feel that for a game that’s about being super over-the-top, there just aren’t enough guns. The weapons that are there are awesome; I just feel that they don’t match how over-the-top the game is trying to be. Of the guns I used, the only one really worth mentioning is the Flail Gun, as it’s just an absurd concept. Grayson can also kick enemies and uses an energy leash, both of which put enemies into slow motion. The energy leash, by the way, is an easy contender for best new weapon in a videogame.

The game does break up the monotony, however, with some awesome large-scale set pieces and boss fights. There’s a chase segment early on that’s pretty entertaining, where Grayson and his ally, Ishi, are on a train and being chased down by a gigantic grind wheel. Enemies are chasing you in trucks and airships, all while the giant wheel is threatening to crush you.

I’m really torn on Bulletstorm. I like the game and will at least recommend it as a rental, based on what I played. But I worry that players will quickly move on to the next shiny thing that catches their attention.