When it comes to super heroes, the most successful are able to recreate the element of the “everyman.” While almost all of us want to be Superman, Batman, Wolverine or, uh, Mr. Fantastic (was that just me?), those guys aren’t necessarily relatable. That’s part of Spider-Man’s charm; Peter Parker taps into the young, awkward teen in all of us. Being able to be him and do his spidery things has always been a fun part of his games, for it lets us get a little closer to that fantasy.

And that’s one of the neat things about Spider-Man: Shattered Dimensions — it lets us play as not only one Spider-Man, but four different Spider-Men. There’s quite a bit of variety here, and it’s nice to see that Activision and Beenox are bringing something different to the different Spidey identities.

I’ve played around with the game for a bit, so swing after the jump for my impressions. 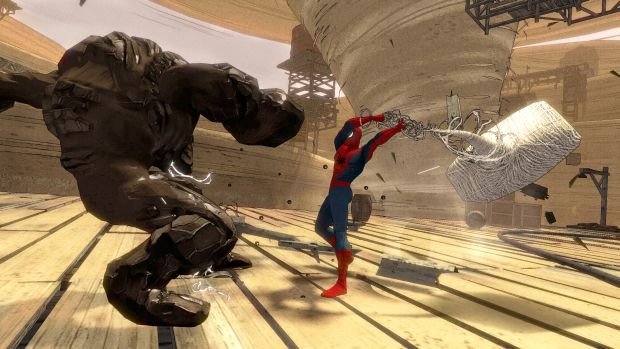 By now the idea behind Shattered Dimensions is pretty well known. Take four different Spider-Man universes, toss them together, and go to town. It’s cool, for sure, to be playing one version of classic Amazing Spider-Man one minute, and the next to be diving off a building as Spider-Man 2099. However, there is some reason to this rhyme, and it seems Mysterio has broken up the Tablet of Chaos and Order. It’s caused all sorts of bad news to go down, and the arachnoid Madam Web has tasked, well, all of the Spider-Man to retrieve the pieces and undo the problems Mysterio started. It’s all typical comic book stuff, and seems inoffensive.

While many past Spider-Man games opted for the open world approach by re-creating New York City and letting Spidey roam about as he pleases, Shattered Dimensions doesn’t exactly work that way considering they have four different universes to work with. Shattered Dimensions is strictly a level-based game, broken up into universes and in chapters. One weird side effect is that because there is no open world, the whole free-swinging portion of Spider-Man is gone. Considering I had seen only a small portion of the game, I’m hopeful that there will be more swinging opportunities in the game, as I didn’t really have many. 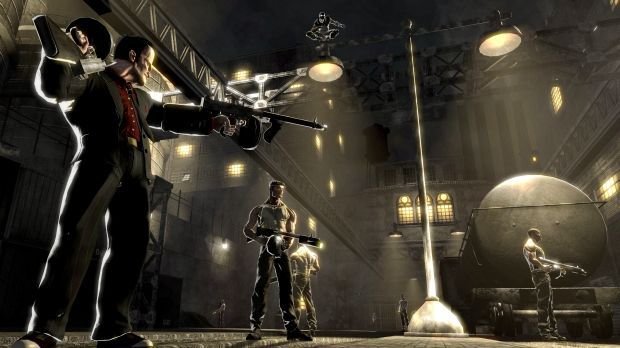 However, swinging aside, each of the four different universes offer slightly different aesthetics and gameplay. While all of the versions of Spider-Man share the same general fighting combos and spider abilities, there is still plenty of variation. For example, the Ultimate Spider-Man level took place in a S.H.E.I.L.D hangar, with a battle going on between Carnage’s minions and S.H.E.I.L.D bots. It was a three-way battle with Spidey, who was chasing down Carnage. With fire and alien flesh all over the place, everything took on a reddish hue. Ultimate can use his Spidey sense, and can also use a rage mode that will increase his powers. That level ended with a boss battle against Carnage. Between first-person punches and kicking his ass into some jet engines, the Carnage fight was usually just mash away at him and jumping out of the way at the last second. Generally, Ultimate is all about the action, with a little bit more focus on the punches.

Amazing, however, is all about the web action. In his mission, Spidey was chasing after Juggernaut, who in his escape destroyed some gas pipes to cause a fire. Spider-Man, the pro at randomly falling into the wrong situation at the wrong time, found himself in the midst of a bunch of enemies in the middle of a construction site. By swinging over and saving the nearby construction workers, I was able to get past. My demo ended there, but this stage offered a little of the free swinging I had been hoping for, as well as showed off the web abilities Amazing could use. His web could transform in fists and hammers, and the combat felt a little bit more distance based than Ultimate. 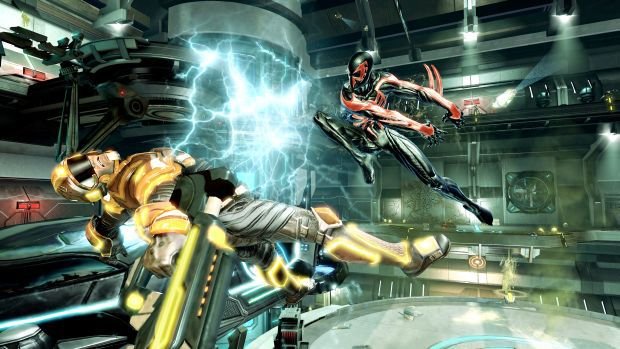 Spider-Man 2099’s major hook is threefold. First of all, each of his attacks are a little faster and much more acrobatic, while in the end they do basically the same thing as the others. However, while Ultimate has the ability to boost his power, 2099 has the ability to slow down time. While this is great for some of the fights, in which Spidey goes all Viewtiful Joe against his foes, it’s even better in some of the free fall sections. New York City is much taller now, and 2099 has the ability to sort of glide down from the top of buildings. In a race against a game exclusive version of Hobgoblin (redesigned to look like a metallic purple gargoyle) Spider-Man is tasked with dodging building shrapnel and other bits thrown his way by Hobgoblin. After this free fall, I was treated to another fight in which Hobgoblin would throw pumpkins at me, and I’d swing them back.

Finally, Spider-Man Noir offered the most interesting version of the webbed on. Based upon the Noir universe, everything is very much in shades of gray, black, and muddy yellow. Activision took some liberties with this version, as he has some extra web abilities he doesn’t have in the comics, such as web swing. This is less important, however, as Noir is focused on stealth. He is a capable fighter one-on-one, but any more than that, and his health takes a dive. Thankfully, in the shadows his health will respawn, so Noir takes on an almost Batman approach to crime fighting: hide in the shadows, and take out your threats from above. His mission was about saving some prisoners locked up in a train yard, and after taking some of Hammerhead’s minions, it was as easy as swinging off to the nearby safezone.

Each of the four versions of Spider-Man offered quite a bit of variety, and it was enjoyable to see how each universe represents what is basically the same ideas and imagery. Most of the charm comes from teasing out the different elements of the game, and working through them to see how this or that will be reinterpreted. It’s certainly enjoyable. 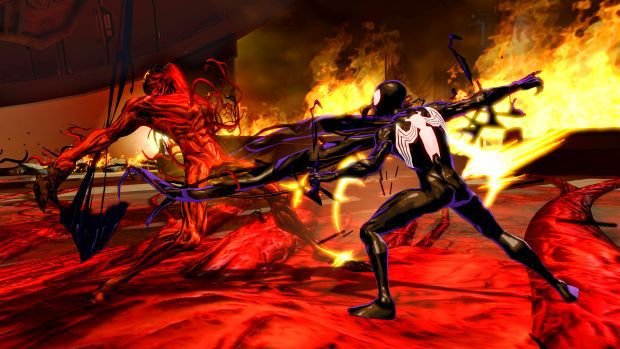 Odd for most tiles coming out, the Wii version is exactly the same as the Xbox 360 and PlayStation 3 versions of the game. Other than the obvious drop in textures and jump in aliasing, the games are exactly the same save some additional motion control. All of the attacks are with the press of the B-trigger, and depending on the angle of the Wiimote up or down, the attacks will be heavy or weak. Shake the nunchuck for a throw, press C to jump, and + or – will access the Spidey Sense and special abilities. It took me a little while to figure things out, and it does fell little complicated. However, these look like they will redeem themselves with other Wii-specific opportunities. In Noir, for example, Spider-Man will have to point where he wants his webbing to shoot on the barred doors holding the prisoners, and you have to yank them off. In Ultimate, during the boss fight with Carnage, players will have to dodge his attacks and throw in punches using motion control. It’s a nice addition, I’ll give it that.

Coming away from Spider-Man: Shattered Dimensions, there are things I certainly like. I like that there are different art directions and looks to each of the worlds, and I like that it gives us a feel of each universe. I like that Spider-Man plays out a little bit in each universe. I am a little disappointed that web swinging seems to take a slight back seat to the combat, but the combat is at least varied and fun. If the whole of the game is enjoyable and dynamic, I can see this being a great sort of game to blast through after a day of work or on a Saturday afternoon. Finger’s crossed.