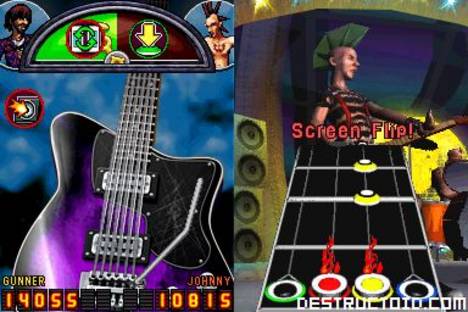 This November, Guitar Hero is making its second appearance on the Nintendo DS with Guitar Hero: On Tour Decades. I had a chance to strap the guitar grip to my hand and give it a whirl at a recent preview event, and found that gameplay wise, it’s more or less unchanged from the original On Tour.

The hook for Decades is the music, of course, which is broken up into various eras of rock n’ roll history. You’ll rock along to tracks from the modern era all the way back to the 1970s, which should provide a decent amount of song and style variations in the final build. Of the tracks available in the preview build I played, all were master tracks and (like the first game) sound pretty good coming from the headphones Activision Blizzard provided for us.

The big deal with Decades is the game’s most impressive new feature — the ability to share songs between from original On Tour for play in Decades. The songs are shared wirelessly, and the transfer is seamless. The transfers are one-offs, and do not stay on the cart, but can be played cooperatively or competitively.

Given this new functionality and the fact that — outside of new venues and songs — the game feels nearly identical to the original, it’s safe to say that Decades is more of an expansion than a true sequel. Fans of the original who are looking for more reasons to rock on the go should probably give this one a look when it hits stores on November 17.

For more information on Guitar Hero: On Tour, check out our full review.