Take Suda51’s creative mind, Shinji Mikami’s long history with the survival horror genre, and Akira Yamaoka’s brilliant musical skills and you get Shadows of the Damned. From what I’ve seen at least, Grasshopper Manufacture’s upcoming “road movie set in hell” isn’t going to do anything that changes the action-adventure genre a whole lot. In fact, the game feels like a faster-paced Resident Evil 4. 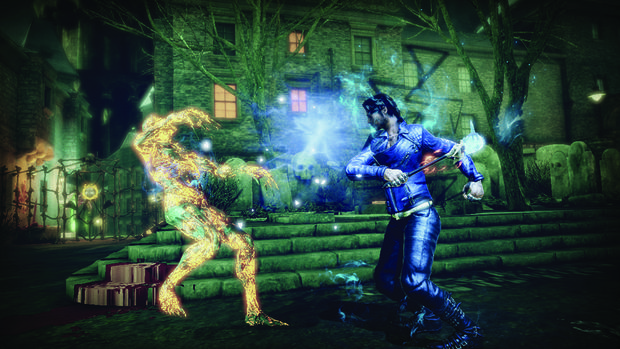 The basic premise of Shadows of the Damned is that your girlfriend gets kidnapped, you get pissed, then you go save her. Sure, it’s not all that original, but it’s how this typical “damsel in distress” story is presented that has me looking forward to the release come this June.

You play as Garcia Hotspur, a demon hunter who’s so good at his trade that he has finally pissed off the Lord of the Underworld, Fleming, enough to come after you. Fleming kidnaps your one true love, Paula, and drags her off into Hell. Garcia follows Fleming, and for the next 10 to 15 hours you’ll be dispatching the minions of Hell as you try to find Paula. 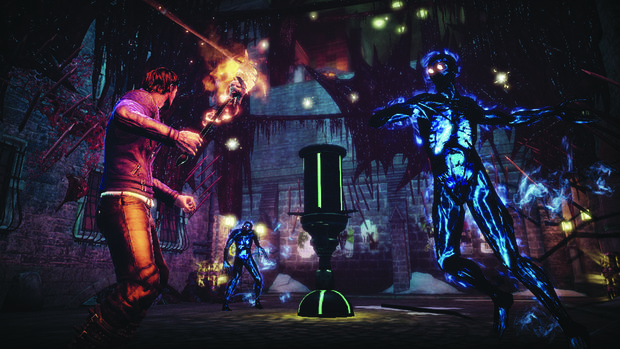 Along for the ride is your friend Johnson, a former demon who’s also a flaming skull on a stick. Johnson is your guide through the game, and the duo will constantly be cracking jokes and helping each other through the adventure. Garcia can swing Johnson around as a weapon, and you can hold down the melee button to charge up Johnson for a super attack.

Johnson can also transform into one of Garcia’s three main guns — pistol, machine gun, and shotgun. As you fight the hordes of the Underworld, you’ll come across enemies that are covered in darkness. Normal shots won’t work on them, so that’s where your weapon’s secondary light shot comes into play. Shoot a demon with a light shot and you’ll knock the darkness off, leaving it vulnerable for your regular bullets (or bones in this case as all your weapons utilize bones, teeth, or skulls as ammo). The darkness can also be knocked off by a torch melee attack.

Shooting enemies a second time with your light attack will stun enemies, allowing you to perform execution kills. I wasn’t given an exact figure, but expect “a bunch” of execution kills. I saw at least six during my playthrough, each as visceral as the next. 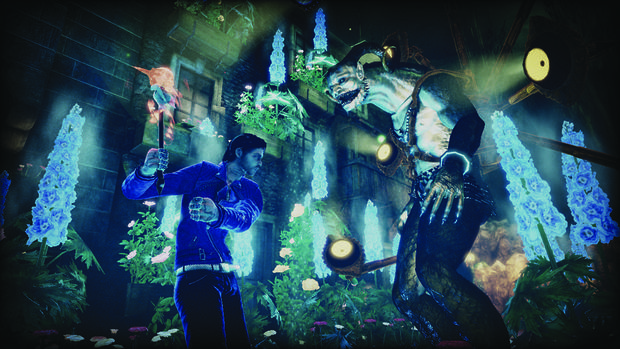 On top of the demons, you’ll also have a secondary enemy to worry about — the darkness itself. Certain areas of a stage will be consumed in darkness, and every second you remain in it will drain Garcia’s health. In most cases, there will be something in the environment that will light up the area for a short period of time and allow you to dispatch enemies. In my demo, I needed to light up a fireworks launcher using Johnson’s head and had a very short amount of light to work with before the darkness took over again.

Later in the demo, I came across a mini-boss that was surrounded in darkness. There was no light source, but the darkness didn’t fill up the entire area. Normally, a player would attack the demon’s weak-spot, leave the darkened area, refill health, then repeat the process. Since EA saw it fit to leave infinite health on, I simply stayed in the darkness until the mini-boss was killed.

As you’re going on this demon-killing rampage, you’ll find yourself running into a demon named Christopher. In classic Shinji Mikami fashion, Christopher is like Resident Evil 4‘s merchant in that you’ll be purchasing health, ammo, and upgrades for abilities and weapons in exchange for the white gems you collect from killing demons. 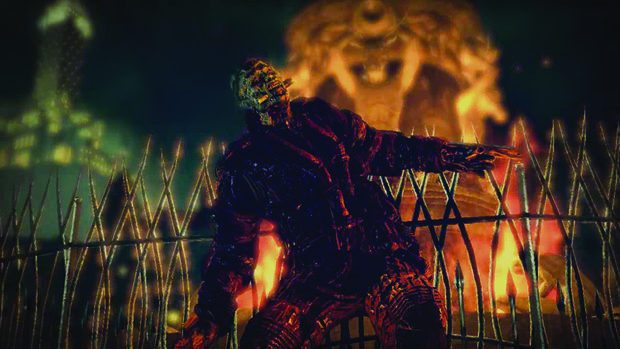 At one point in the demo, Garcia hops on a giant chandelier and uses it to ascend a giant tower. The room is filled with darkness, so Garcia needs to swing the chandelier around the tower and destroy numerous dark balls in order to continue his ascent. It was a simple change of pace, one I hope is an indication that there will always be something like this to shake up the gameplay.

The demo concludes right before a boss fight against a demon named George. You’ve already kicked George’s ass once, but this time he transforms (by pulling out his own heart and eating it) and then summons a horse to ride around on.

While these screens don’t do any justice, the game looks really good. I just love the character designs, especially the fucked-up demons. As a giant Suda51 fan, I know I’m going to end up enjoying Shadows of the Damned. The basic concept of “saving the girl” is beyond played out, but it’s the Suda51 touch that I know is going to keep me engaged throughout the entire experience.

That’s why I’m worried about how Shadows of the Damned is going to do in sales. I know what to expect because I’ve played Suda51/Grasshopper games before. While the games are great, they generally have a history of doing poorly in sales, and that’s in large part because they’re not advertised properly or at all. At the very least, I’m glad to see the game is now coming out on June 21 instead of the week of E3 as it was originally scheduled.