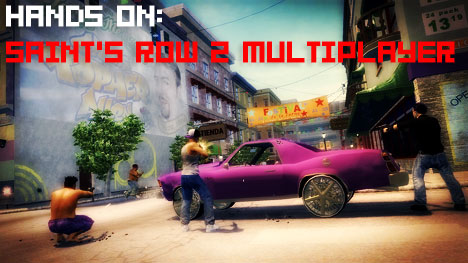 When we first got our paws on an early build of Volition’s Saint’s Row 2 in April, we called it “a $200-a-head Las Vegas illusionist performance featuring Pamela Anderson, then Volition’s sequel is a balls-to-the-wall, over-the-top Coney Island sideshow starring a limbless, glass-eating female midget named Senorita Cobrita.”

As it turns out, our first impressions were closer to the truth than even we had expected. While THQ and Volition didn’t pick up Anderson, they did announce adult actress Tera Patrick as a “special producer” on the game. And while we’ve yet to see any glass-eating, you can play the game as a female with a man’s voice wearing a hot dog suit and clown shoes.

It’s clear that Saint’s Row 2, in terms of its themes and tone, isn’t going to be a serious affair. And that’s a good thing; in trying to find the game’s identity, Volition have taken Saint’s Row 2 in the polar opposite direction of its direct competition, the automobile stealing title that shall not be named.

THQ and Volition recently held an event to show off another aspect of Saint’s Row 2 that they hope will make it stand out from the crowd — its multiplayer modes. Hit the jump for details and impressions of the game’s cooperative mode, as well as its competitive games-within-a-game “Strongarm” mode. 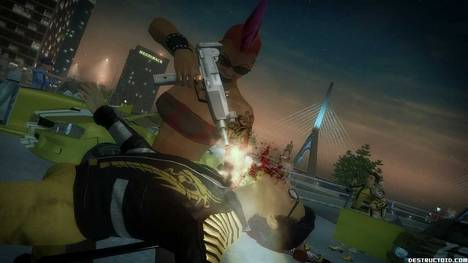 Impressively, Saint’s Row 2‘s cooperative campaign directly mirrors the game’s single-player story mode. That is to say, everything you can do on your own, you can do with a friend. From the first mission to the last, and every side-quest and mini-game in between, there’s no reason to go at it alone.

We started a cooperative game from the story’s very beginning, which had us waking up in a prison hospital, plotting to break out. While the cut-scenes on both screens were identical, it was a nice touch to see that each of our characters were talking to different doctors on our respective screens. After busting out of the prison (one of us using a wheelchair to clobber guards), we found our way to a speedboat mounted with machines guns we used to take out police in their pursuit.

The cooperative aspects of this mission didn’t seem particularly strong; it was obvious that tasks were designed around being able to complete them alone. The main differences seemed to be the number of enemies, a prompt telling us to stick together, and — from what lead design James Tsai told us — the amount of damage both players and enemies could take. That’s not to take anything away from the experience, though – playing through Saint’s Row 2 with a friend via LAN or Internet will definitely be blast. We were kept entertained for well over an hour before we were kicked off our gameplay station. 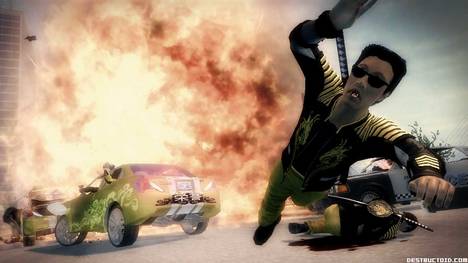 Over the course of that time, we ran a wide variety of story missions and side-missions, including barging in on the trial of Johnny Gat (a major “playa” from the first Saint’s Row) and fecal-spewing side-mission called “Septic Avenger” that had using hoses attached to a septic truck to cover the world in poo. The world of Stillwater has been expanded significantly as well, with some missions taking us seamlessly into underground areas with no load times.

Like the first game, it looks like Saint’s Row 2’s strong points will be the number of varied activities a player can engage in. Adding a friend to the mix certainly looks like it will sweeten the deal. 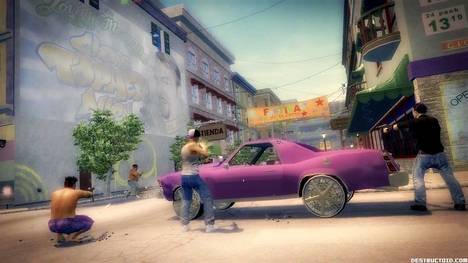 In looking at Saint’s Row 2’s competitive multiplayer game, Volition had a few goals in mind. First, they wanted to maintain a continuity from the game’s single-player mode, meaning that weapons, vehicles, and how you use them would be consistent. Second, there needed to be constant action.

Finally, they wanted to create a mega-mode of sorts, one which rolled many different types of gameplay in to one tight experience. The result is the game’s new “Strongarm” game type, a catch-all mode that combines many of the fragmented aspects of the original games various game modes. In this mode, two teams of four fight over territory; the team with the most cash at the end of the mode wins.

While a team can gain cash by performing kills, that’s really not the meat and potatoes of “Strongarm,” which is broken down into separate modes inside the bigger one. These modes and activities change dynamically as the game goes on. One minute you can be participating in a race, the next you’re killing a pimp to claim a ho in the “Snatch” activity, causing as much chaos as possible in “Mayhem,” or smashing into other cars in “Destruction Derby.” Money is earned within each of the activities which goes towards your teams overall score, but winning that particular activity will result in a huge cash bonus for your team.

Additionally, each “Stronghold” specific map (six will ship with the game) has randomly generated “tagging spots.” By tagging these spots (spray painting them by simply holding a button and waiting for the spot to be controlled) you’ll reward your team with a bonus that can tip the scales of an activity or combat in its favor. Bonuses include “Super Sprint” (unlimited stamina), police support (A.I. controlled squads will give your rivals a hard time), cash generation, and more. The bonuses and buffs will remain active as long as your team controls that point, so maintaining control and protecting tags can be essential to success. 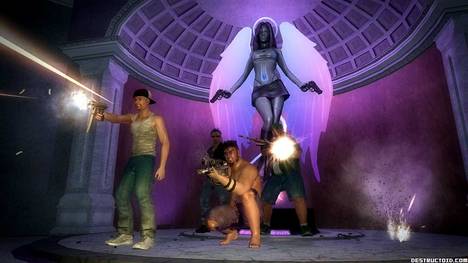 In the games we played, Volitions goal of non-stop action was definitely achieved. There was always something going on, with little downtime between activities, and even then you’re open to simply slaughter your rivals for cash. While many traditional multiplayer games often leave some players out of the action — maybe they’re not particularly good at deathmatch or racing, for instance — “Strongarm” seems to do a pretty good job of keeping everyone involved.

By providing different types of activities throughout the course of a match, in addition to the tag system, it was always easy to find a role to fill within the game. If you find in one match that for whatever reason you simply couldn’t take out members of the other team, for example, you could focus on controlling tags throughout the map. The idea is to always have players feel like they’re contributing, and in the few matches we participated in, we always did feel like an important part of the team.

Saint’s Row 2 will also feature a new ranking system, based on the amount of money collected in matches. Players start off as  a “New Jack,” and work their way up through different ranks, like “Assassin,” “Gangster,” and “Soldier.” Additionally, badges can be earned based on performance — perform a lot of headshots, earn the “Brain Surgeon” badge, or bust caps at anything that moves to net the “Trigger Happy” badge. Badges will be displayed before and after matches, right below your gamertag, which should help flesh out your online identity. 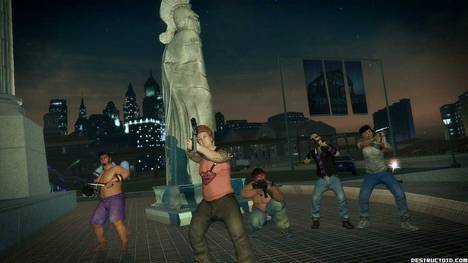 “Strongarm” seems to be the focus and certainly most interesting aspect of Saint’s Row 2’s competitive multiplayer, but the game will also include the more basic deathmatch modes. Both “Gangsta Brawl” and “Team Gangsta Brawl” from the first game will be making their return, for those looking for a more traditional experience. These modes can be played across seven maps, separate from the ones used in the “Strongarm” modes.

Saint’s Row 2 ships for PlayStation 3 and Xbox 360 on October 14, and will make its way to PCs later this year.